No, it does not. Tolerance as a form of Justice (which is the ultimate term/entity that defines right and wrong) is a social construct, not a axiom:

Tolerance, as we know it today (liberal term) appears in Western philosophy around the 15th century (relatively recent) adapted especially to Protestantism by Kant and Hegel. But the abuse of this term came with the work of Karl Popper: The Open Society and its Enemies (1945). An attempt to systematize the study of the behavior of human societies from a very biased (colonial) western point of view. Being a work with a lack of scientific rigor (it does not include the study of the modes of production) and measuring the limiting (tolerance) behavior of society, from a puritanical liberal perspective of tolerance, it reaches such absurd conclusions as that communism (socialism) and Nazism (fascism) are essentially the same.

Classifying people as tolerant or intolerant is not a good starting because no one is wholly tolerant or intolerant. With context some sense can be made out of them but posing a philosophical question like this without laying down the assumptions that go with these labels is bound to cause confusion.

As always, depends on the meaning you give to the words you use. Personally, my definition of tolerance is similar to the one I have for freedom : it only applies if it treat everyone without discrimination. So your freedom limits itself to the actions that don’t limit the freedom of others, and your tolerance stops where the intolerance of other begins. Only by including those limits in those notions themselves can you give a collective meaning to these words that is not self-contradictory. 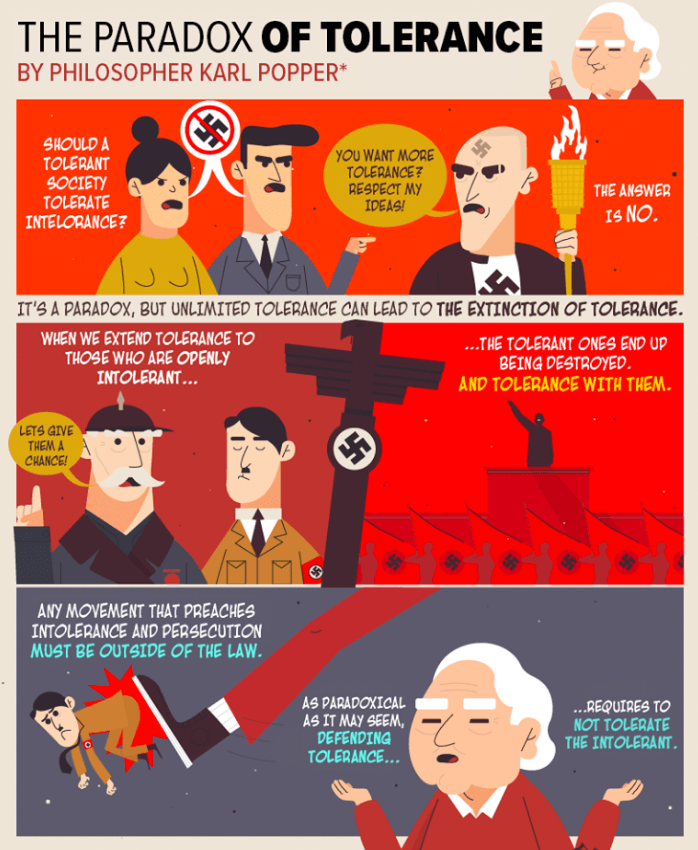 Nothing in the infographic is specific to Nazis, that was just an example. It can also be applied to things like Catholics/Baptists/Evangelicals/Mormons/JWs, conservatives/MAGAs, Zionists, TERFs, and incels. Any bigotry in general, really.

Put up a info graph of a baptists and see if you don’t get absolutely crucified in the comments.

Well, I just insinuated that with all the major conservative Christian groups, including baptists. We’ll see.

Lmao there are legit Nazis out there

Yes. The people flying Nazi flags at MAGA rallies in the US are totally trolls. They were totally trolling when they were harassing and threatening minorities in public!

I’ve been to a few MAGA rallies. I never saw any Nazi flags there. However, I have seen a ton of lefty protesters operating false flags and trolls. Those dopes always get booed and thrown out.

check the modlog even today some nazi tried to troll on lemmy. All the communists I see want to improve the world not kill off minorities.

When the Russian communists forcibly confiscated Ukrainian farm land and then tried to have them run by government commissars in one big mass farm system, they were doing it with the good intentions by trying to use use economies of scale to provide more food for everyone.

The problem was they robbed the actual farmers of agency and destroyed the actual motivation to efficiently grow food. Government employees, who get compensated whether they grow little food or a lot of food, are going to naturally maximize their personal gain. Since that gain couldn’t be monetary, all they could do was minimize their own expense and effort. So they spent as little effort as possible, and those farms largely failed.

That lead to famine and mass starvation that was so bad, when the Nazis invaded Ukraine during WWII, some Ukrainians temporarily welcomed them as liberators.

That’s why most of the modern day governments that still call themselves communist or socialist have largely abandoned the economic ideals of communism and have almost all adopted free market systems.

You seem to be struggling with the idea that tolerance is a boolean attribute you either have or don’t have. I think you know that’s untrue. Everyone tolerates most things while not tolerating some things.

Yes because you don’t know if you’re right

If the “intolerant people” are committing crimes, then you deal with those crimes in the fashion that your politics and morals deem right.

If the “intolerant people” are committing no crimes and you leave them alone as they are leaving you alone, then how is this not ideal?

Sure, in your imagination, they are out there somewhere thinking bad thoughts, and in your imagination this harms you, but that doesn’t rise to the level of crime. There is no action that is justified on your part. Taking action makes you more than intolerant, it makes you the criminal.

Those who believe in the paradox of tolerance are nothing more than lazy brainwashers who assumed that everyone would think identical thoughts as they do and believe identical beliefs as they do, without doing the hard work of any actual brainwashing. And when their laziness proves to be ineffective at creating their pod people utopia, somehow for them it’s justification to do it the hard way. Really quite bizarre.

If the “intolerant people” are committing no crimes and you leave them alone as they are leaving you alone, then how is this not ideal?

There are intermediate states between “committing crimes” and “leaving you alone”. The intolerants may be misinforming other people to have them rally their cause until they are enough to democratically set up intolerant rules. Intolerant behaviours should always be called out so that they never become the norm.

There are no intermediate states. I might indulge in the idea that prior to committing an actual crime, people plan to commit crimes, and that that should be punished as a crime itself (and I’m aware that it is in the US, but that it’s pretty easily abused).

You’re either committing a crime or not. It really is binary. It can’t not be binary, because then no one can know whether they are in this hypothetical gray area of yours.

We can argue about crimes themselves, of course. I somehow doubt we’d argue much. For instance, you need not punch someone to commit a crime, raising your fist is itself criminal. You can’t incite riots. And Kyle Rittenhouse is a murderer as far as I’m concerned… “self-defenders” don’t rush off to riots to defend themselves. Going to a riot is identical to being a rioter yourself, and they have for the duration of their crime forfeited any claim of self-defense.

But someone calling you mean names? Even the really bad ones? It’s not a crime, and it’s not some intermediate state between the two. And quite frankly I don’t ever want to live in a world where you manage to convince everyone else to let you run it as if that were the case.

The intolerants may be misinforming other people

Probably. But that’s not a crime. Or a not-quite-a-crime.

The solution is for you or someone else to correctly inform them. Nothing more is needed.

to have them rally their cause until they are enough to democratically set up intolerant rules.

This seems unlikely. But should it come to pass, then fix the rules. And if they’ve perverted the rules so thoroughly that this cannot be done within the framework of the rules themselves, then all their lives are forfeit. Tyrannical governments and their enablers deserve to die.

But you don’t get to preemptively do the same shit yourself under the theory that “they were going to do it first!”. And no, you’re not different since you’re doing it “for a good reason, unlike what they’d do”.

But someone calling you mean names? Even the really bad ones? It’s not a crime, and it’s not some intermediate state between the two.

It is actually a penal offense here in Belgium, and I wouldn’t bet we are alone on this. But independently of that, if someone I know uses intolerant slurs I will call them out on it.

But you don’t get to preemptively do the same shit yourself under the theory that “they were going to do it first!”. And no, you’re not different since you’re doing it “for a good reason, unlike what they’d do”.

I said that the intolerant behaviours should be called out, I never said that anyone should kill anyone else. You call them out if it is safe enough, otherwise you call the police

It is actually a penal offense here in Belgium,

I’m not surprised, given that it’s Europe. Not exactly a bastion of freedom.

and I wouldn’t bet we are alone on this.

Certainly if more people agree with you, that means you’re correct.

f someone I know uses intolerant slurs I will call them out on it.

Nothing I’ve said should discourage you from doing so.

I said that the intolerant behaviours should be called out, I never said that anyone should kill anyone else.

Not yet. But those who become upset when the “intolerant people” don’t stop what they’re doing, they usually get there sooner or later.

it’s Europe. Not exactly a bastion of freedom.

Life in Europe is pretty free imo. Except maybe for company managers who want to fire people for no good reason… How are the US more free?

At least here we can legally order beers at age 16, and spirits at age 18, that’s a good part of the freedom my silly European mind needs :D

Certainly if more people agree with you, that means you’re correct.

Certainly if the US law says saw, that means you are correct… If want I was just bringing up the fact that using the law as a criterion in a moral discussion is a bit shady, as the law is not the same everywhere.

In fact randomly insulting someone on the street is not necessarily punishable (except if they are a public authority), but harassing people, or inciting other people to insult categories of people, like homophobic or racist propaganda, are punishable by law here. I don’t really miss the freedom to create a openly racist club…

Nothing I’ve said should discourage you from doing so.

There is no action that is justified on your part. Taking action makes you more than intolerant, it makes you the criminal.

Taking action doesn’t mean committing crime. Publicly calling out a bad behaviour and siding with the victim is taking action. Filing a complaint at the police station, or encouraging the victim to do so, is definitely taking action.

It is part of the gouvernment’s mission to punish the formation of intolerant groups before threy become an actual threat to the safety of the people they are intolerant of.Indeed what you said

Not yet. But those who become upset when the “intolerant people” don’t stop what they’re doing, they usually get there sooner or later.

about the tolerance champions also apply to the intolerants.

If the government fails at this, then it’s time to consider taking action against the government itself. Of course, this doesn’t mean litterally shooting the sheriff or the deputy, first there’s pacific demonstration, endorsing then voting for parties who plan to improve on that point. Actual rioting comes only if all that fails.

Its a well-known paradox

Basically there’s a continuum of behaviors and neither extreme is good, so everything should be up for public debate what should be tolerated.