Best example I could find. Two phones in portrait and landscape, plus a dedicated scientific calculator. 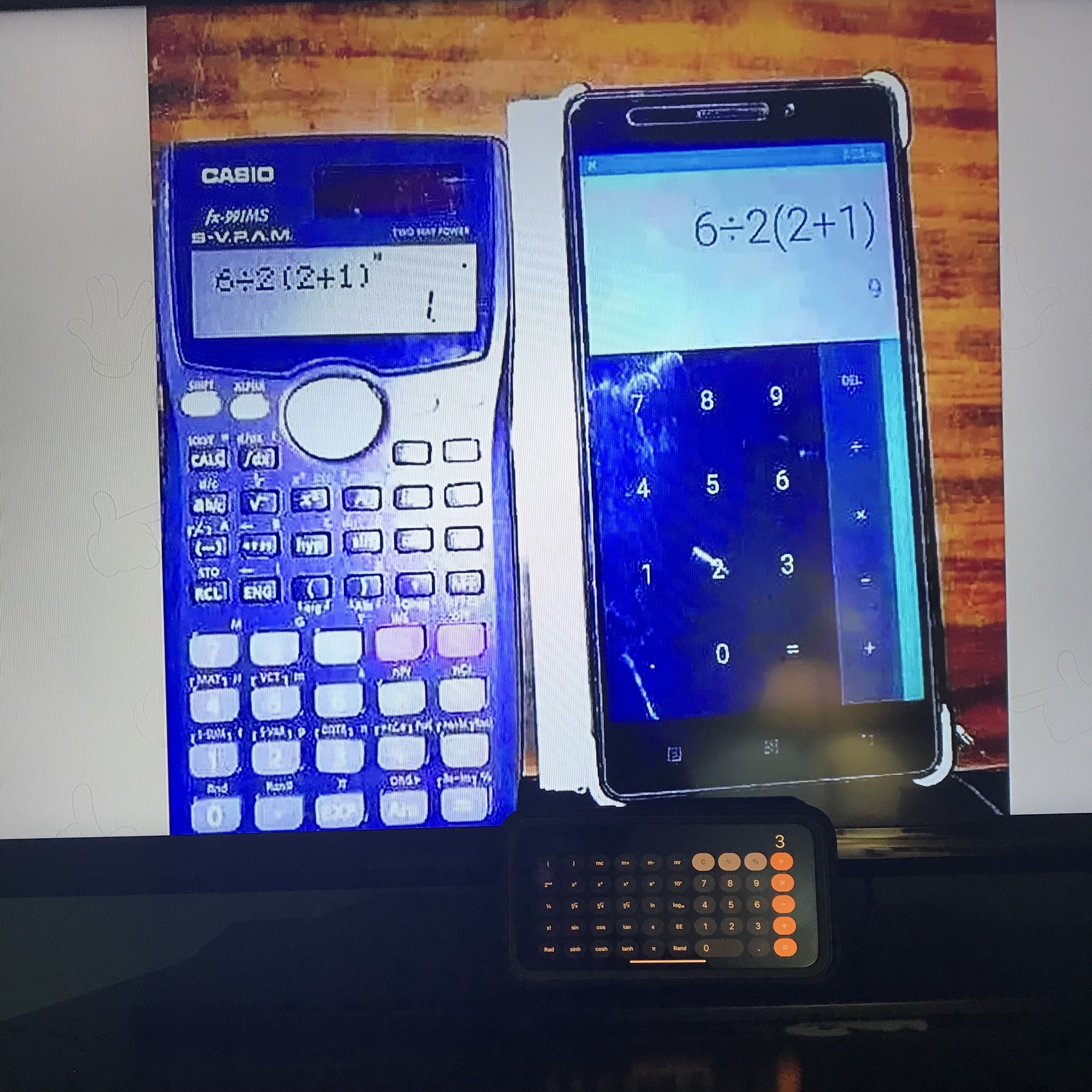 link
@AgreeableLandscape
admin
toasklemmy•If you could introduce a few obscure/minor laws to your country, which ones would you choose that would make the most positive or interesting impact?
link
1•
edit-2
2d

What we have are even worse than placebo buttons. They do work and you’ll never get a crossing light without pressing the button, but they actively make you wait longer to cross compared to if they were automatic. The buttons, to my knowledge, do not affect the main traffic light timings at all (I haven’t times it with a stopwatch or anything, but I cross a few of the same intersections very often and have never perceived a timing difference between button press and no button press).

link
@AgreeableLandscape
admin
toasklemmy•If you could introduce a few obscure/minor laws to your country, which ones would you choose that would make the most positive or interesting impact?
link
2•
edit-2
2d

Freezer might be a viable alternative actually. Especially if you use a heat pump and use the “waste” heat to heat buildings in the winter. Or, even with greenhouses, a ground source heat pump that stores thermal energy in the soil in the summer and extracts it in the winter could potentially also work. Heat pumps can be up to 5x more efficient than resistive electric heat.

The thing is, to my knowledge, the only fresh produce available locally in Quebec in the winter is greenhouse grown because it’s literally too cold for any edible plant to grow in the fields. Broccoli isn’t special in this regard because nothing would be in season.

To be fair the assignment wasn’t really meant to actually inform people what they should do. It was meant to test our ecological impact assessment and data analysis skills that we learned over the term, so they probably did pick a relatively simple example (still with real numbers though).

link
@AgreeableLandscape
admin
toasklemmy•If you could introduce a few obscure/minor laws to your country, which ones would you choose that would make the most positive or interesting impact?
link
1•3d

The HOA shouldn’t exist period. They are a tool by rich/middle class people to keep the poor out of sight and out of mind, essentially forcing them out of “better” neighbourhoods through fees and mandatory spending to keep their house looking nice even over their essentials. They’re also not great for the environment by (in most cases) mandating the presence and upkeep of conventional lawns, which are, ecologically, one of the worst things you can plant. Try planting an eco friendly native grass lawn or a garden of edible crops and you’ll get fined (or sent to jail, seriously). They have also been known to impede the installation of things like rainwater collection systems or rooftop solar panels.

link
@AgreeableLandscape
admin
toasklemmy•If you could introduce a few obscure/minor laws to your country, which ones would you choose that would make the most positive or interesting impact?
link
2•3d

New get rich quick scheme–Doctors hate this one weird trick: Give yourself food poisoning!

link
@AgreeableLandscape
admin
toasklemmy•If you could introduce a few obscure/minor laws to your country, which ones would you choose that would make the most positive or interesting impact?
link
1•3d

Actually, it depends. We did an analysis in one of my university environmental science classes about if you’re living in Montreal in the winter, if you should buy produce from the subtropics (California in our analysis) or local produce. Well, local produce in Quebec is grown in greenhouses in the winter. And as it turns out, the carbon footprint to heat those things far outweighs everything else combined: including transportation. Like, you can get many times more produce shipped straight from California for the same amount of carbon emissions of a single stalk of local broccoli. The difference was so far beyond any margin of error that there was no way we could justify getting local produce no matter how much we tried (I’m pretty sure most people in our class went into it assuming local would win hands down).

The takeaway is: if it’s really cold, food production isn’t efficient and you might just be better off getting non-local food from somewhere warm.

Or, crazy idea (surely), a rich tax that actually brings them down to the level of people they think they’re superior to? I’m not talking about “50% on your income” and some capital gains or something, I’m talking redistributing the vast majority of their wealth until they’re even with the rest of the citizens. Hmm…

link
@AgreeableLandscape
admin
toasklemmy•If you could introduce a few obscure/minor laws to your country, which ones would you choose that would make the most positive or interesting impact?
link
2•
edit-2
3d

No, I’m not talking about a traffic light that is completely controlled by the crosswalk button like you see in the suburbs, I’m talking about a specific design that I see everywhere where I live (Metro Vancouver, Canada): There is already a traffic light for cars, and it’s on a regular cycle. If you don’t press the crosswalk button, you’ll never get a crossing light. Even if you do, it waits for the next time the traffic parallel to you is running and there is no protected left, before it lets you cross (you know, like how crosswalk light works any intersection without crosswalk buttons, where the crosswalk is controlled automatically). Also, if parallel traffic is already running when you press the button, it always waits for the light to change to through traffic, then for the light to change again to parallel traffic before letting you through because the controller will not allow a crosswalk cycle that is shorter than the regular traffic cycle, even if there is plenty of time in the current cycle to let you pass (or even if the light JUST changed to parallel traffic).

Is everyone getting tree planting wrong? Here’s how to get it right!

Is everyone getting tree planting wrong? Here’s how to get it right!

For most things, VSCodium. A completely FOSS fork of Visual Studio Code.

Intellij Community Edition for Java and Kotlin. I’m actually eligible to get any Jetbrains paid IDE for free through my university, but I still stick to the FOSS versions out of principle.

Fun fact: this is because most basic calculators don’t follow order or operations and just calculate from left to right.

Best part is with phone calculator apps. In portrait mode, most don’t follow order of operations. In landscape mode with the scientific operations expanded, it does, so you get two different answers depending on what position your phone is in. It’s endlessly confusing.

link
@AgreeableLandscape
admin
toasklemmy•If you could introduce a few obscure/minor laws to your country, which ones would you choose that would make the most positive or interesting impact?
link
7•
edit-2
5d

At the risk of committing whataboutism, I find that Windows is actually worse in terms of weird things going wrong, getting bricked, or needing to bodge together stuff to get it to work.

Reminds me of this classic IT scenario:

User: “Something went wrong! I got an error message!”

Technician: “Okay? What did the error message say?”

A program that is valid in 340 different languages

This entire 12 page thread was one hell of a journey. And language 340 was added just a few days ago, so it’s still active!..

A program that is valid in 340 different languages

Another idea I’ve had is for EVs to place contacts on the undercarriage, and prongs built into the ground at parking spaces can be raised to meet them for charging. No wires required, and way more efficient than those giant inductive charging pads under the cars (basically a beefed up version of wireless charging for your phone) that some companies thought were a good idea for some reason. Though it would definitely have to be standardised so every EV can work with it.

Some streetcars (trams) already do essentially this. See APS. While the tram is moving, no less.

Build solar panel roofs over parking lots and use those to offset the charging energy (I doubt current solar is effienent enough for a car sized area to actually satisfy the entire charging energy requirement, at least not when every space is filled with cars using the array. It will also mitigate the problem of cars getting insanely hot on sunny days and needing to waste energy running the AC to cool it down.

As long as they’re kept reasonably far away (I imagine a few meters would be enough), it should be fine. The internal combustion engines driving on all sides of the pumps don’t usually ignite it, neither do trolley bus wires (which occasionally let out fairly sizeable sparks) or just general overhead power lines. There’s also no oxygen in the storage tank or feed lines, so even if the vapours catch on fire, it really shouldn’t explode like in the movies.

Came up with the idea of a vegan meat brand called “Death Free Meats.” It could even have product names like “Death Free Chicken” or “Death Free Beef” for things that simulate specific types of meat. …

Is wood paneling more sustainable than drywall or stucco?

All the information I could find were comparing styling and/or costs. But what about environmental impact? To me, it would seem that assuming you’re getting new-growth wood from a sustainable source (or reclaimed wood), it would be better than mined and non-recyclable gypsum or petroleum based paint…

Is wood paneling more sustainable than drywall or stucco?

@AgreeableLandscape
admin
toPolitics•Climate denial is waning on the right. What’s replacing it might be just as scary
link
3•
edit-2
7d

Either that or “climate change is real but the economy is more important!!!”

Or, more likely, both contradicting claims at the same time.

The chaotic energy in this screenshot

The chaotic energy in this screenshot

Heat Recovery in Data Centers. Why so difficult to use?

Heat Recovery in Data Centers. Why so difficult to use?

What is Rust NOT suitable for, architecturally?

From a language architecture standpoint and not an ecosystem standpoint, what might be some things where you’d really not want to use Rust, either because of some limitation that prevents it from doing it or just because it’d be massively annoying to write to the point of significantly reduced produ…

What is Rust NOT suitable for, architecturally?