Beans are better, They grow and feed, Without want nor need, For life beyond, a simple frond

link
@creativeBoarClimatetoasklemmy•What programs or techniques do y'all use to keep track of to-do lists? (e.g. markdown + git, bullet journals, etc.)8•9M

I know it’s archaic, but pen and paper. There’s just something more fulfilling about crossing off an item

link
@creativeBoarClimatetoFermentation of vegetables, grain, and whatever takes your fancy•An attempt at a Norwegian farmhouse raw ale using Kveik1•9M

Has been crashing on lemmy, specifically around multiple comment edits.

This is probably not the right place to put it but I’m drunk, hope this is helpful / please direct me to the portal for bug reports

e: love your stuff, please keep being you it’s amazing

Yeah, we consent to use google chrome, but, reasonably, users can not be expected to consent to every webpage privacy stuff

as a science, I hope this helps

I wrote a science fiction esque description of my favourite Pokemon, Fennekin, trying to explain their appearance and the Pokedex entries and other lore surrounding them in a sciencey way. I might write these for other Pokemon if there is enough interest. Please let me know what you think!

The Physiology of Pokémon: Fennekin

Fennekin, the Fox Pokémon, is a fire-type Pokémon primarily native to the Kalos region. It is the official fire-type starter of the Kalos Pokémon League.

Fennekin are small, quadrupedal Canid Pokémon, with mature males measuring up to 40 cm in hight and 9.4 kg in weight. The most prominent characteristic of a Fennekin is its large head in proportion to its body; equally striking is its the proportion of ear mass area to head size. They have very soft and fine tri-colored fur, with yellow covering most of its body, accented by an orange tip on its short fluffy tail and long hairs jutting from its ears. They have a white band on the bottom of the head and muzzle which increases towards the idontknowlol (Ash & Misty, 2010). The orange accents are thought to be a warning signal to potential predators (Estenmire et al, 2020), a sign of their deadly fire attacks; for threats to reconsider initiating a confrontation. This colouring could also present visual cues for members of a skulk to locate each other (HiddenLayer, forthcomming).

Fennekin have long, thick whiskers on its cheeks that helps with tactile feedback when burrowing, or venturing into confined areas. Longer hair on its back haunches provide cushioning when resting on rocky ground. Its eyes are white with elliptical orange iris and pupils, oriented vertically, bordered on top by a black stripe on the top eyelid for absorbing excess light in order to reduce glare. This appears to blend into the white fur at the bottom. Below the eyes is a short snout that ends in a black, pointed nose.

Its body is quite small for its head, and is attached to thin legs that terminate in equally thin paws. Retractable claws and a covering of fur make Fennekin’s toes nearly invisible when seen from afar.

Fennekin have been known to be omnivorous; the majority of their natural diet consist of animal tissue, typically small rodent, bird and bug Pokémon. Fennekin have evolved a unique adaptation for fire-type Pokémon; the ability to convert plant matter directly into fuel via the Kenictious reaction.

Fennekins have an affinity for eating twigs, and similar forms of wood, which is digested by pyrocellulase (EC 3.1.3.72) and pyroligninase (EC 3.7.1.12). This process converts the structural fibers of plants to liquid fuels that can be transferred to the flame sac for combustion. A Fennekin’s teeth, though similar in structure to other primarily carnivorous Pokémon, have much stronger enamel to combat the wear from twig digestion. The unique metabolism of this Pokémon allows it to spend less time feeding while producing the fuel necessary for _youretheartisthere.

A common and potentially harmful myth is that, due to the Fennekins constant foraging for twigs, they can subsist on a vegan diet; or one comprised entirely of wood products. This is not true, as Fennekin do not use wood for nutrition, only in fire production. They are still physiologically omnivores that prioritize eating animal matter. Trainers feeding their Fennekin insufficient diets have caused severe malnutrition, sometimes leading to permanent organ damage and death. However, feeding a Fennekin wood products before battle is an efficient way to power up its fire-type attacks, and, after battle, may help to recharge fuel reserves.

Hope you enjoyed my edits! @HiddenLayer5@lemmy.ml

e: I really enjoyed your story, I hope you see my messing around as an expression of love

I love your effort bro, I promise I’ll finish reading it

First frame: A bad ass motherboard struts down a street boasting of it’s boot times. An M2 drive pokes out from it’s side …

Weird from google but okay!

I’ve got to go back and watch 1997s Fifth Element. This dude is giving me some 90s hedonic cyber punk vibes

I’m going to go look up the definition of news

When you’re worried about where you’ll be sleeping, which one of your friends just OD’d, and how you’re gonna get out; the topic of civic duty, environmentalism, and empathy to people who’ve shown you none is a bit ridiculous.

To be fair, the bbc is probably one of the most reliable sources of news.

A study timer made in bash [feedback]

I wasn’t easily able to find a command line study timer so I made one. …

A study timer made in bash [feedback] 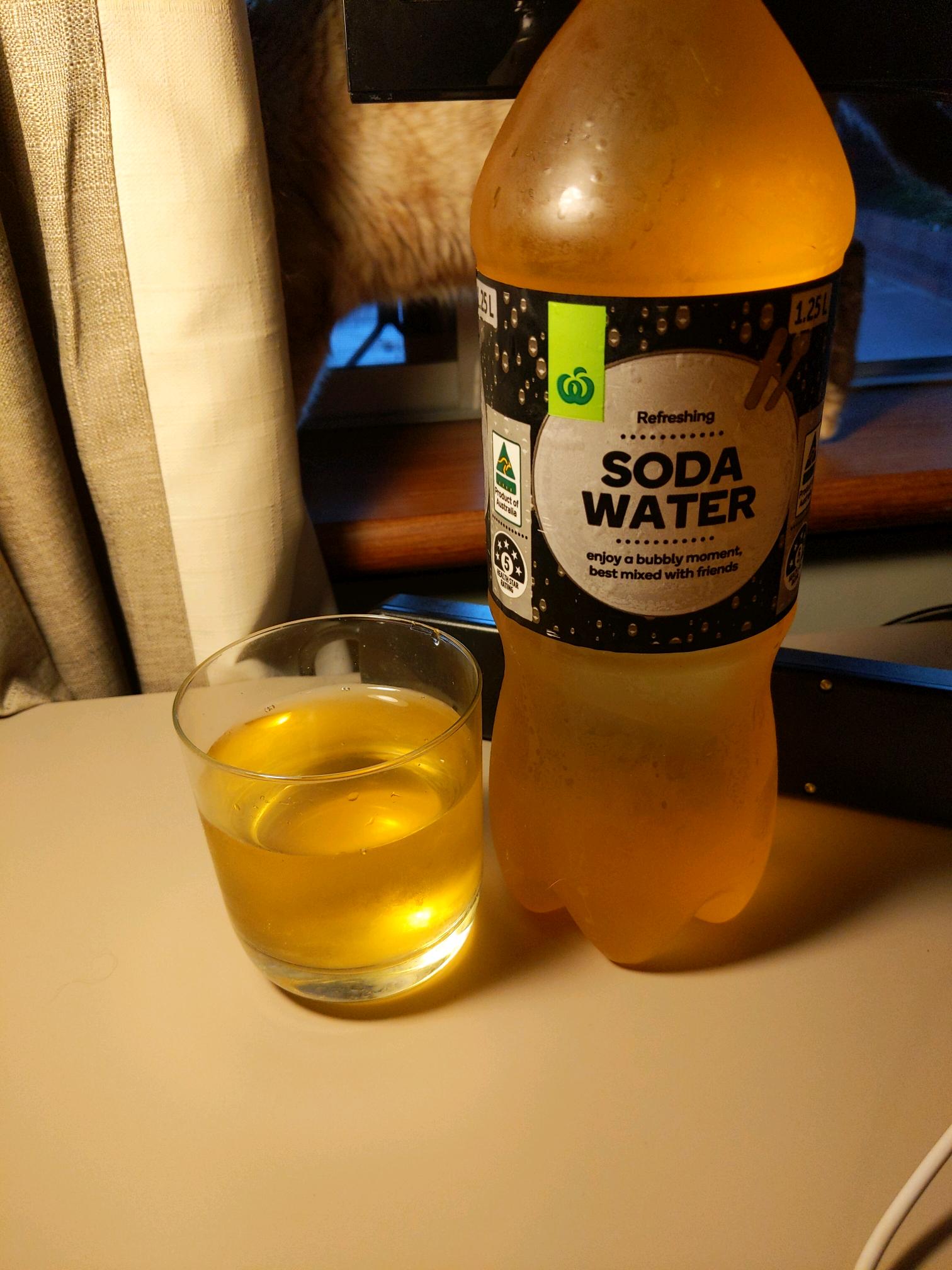 It’s been pretty cold where I am at the moment, so it took a little longer to ferment (and I forgot it was going for a bit). This is the cider I produced with this method. I then siphoned it off into soda bottles and refrigerated it for a week. I’m pretty impressed with how it turned out. I would not have guessed it was made with brewing yeast.

This is my first attempt at roasting malts. …

@creativeBoarClimatetoFermentation of vegetables, grain, and whatever takes your fancy•An attempt at a Norwegian farmhouse raw ale using Kveik1•9M

I have repeated this recipe with hops, it was pretty good.

So at bottling I bottled a little over half the mixture and placed it in the fridge. I didn’t have enough room for the other half so I dissolved three small teaspoons of potassium metabisulfite in a small amount of water and added it to the remainder of the beer (~7 L) and bottled it, leaving it at room temp. The refrigerated stuff was amazing, the proudest I’ve been of any beer I’ve made. The sulfite preserved beer was undrinkable; I think some of the yeast might have died and contaminated the beer with autolysis smell. It was so bad I didn’t taste it for long enough to get a real handle on what could have happened, all I can say is

link
@creativeBoarClimatetocasual•What are your favorite books? What book are you currently reading?1•10M

I am currently reading The Forever War for the first time

link
@creativeBoarClimatetocasual•What are your favorite books? What book are you currently reading?1•10M

Okay, here we go, there’ll be a number of edits, in no order. I will update with descriptions

Ada or addor: A family chronical

This other eden by Ben Elton

All the old sci fi writers

What is this in reference to and what is your argument?

I was highlighting the difference in power politics. In my country the rich (powerful) use the police to destroy data and raid homes if it looks like someone might disrupt their bottom line. In china it is the same, but something that would be inconceivable here (arresting the rich) is possible because the power dynamics are different.

I am not discussing which is a better system; though I do have a strong opinion on that.

I think it’s a difference of power. In the US it’s the rich that hold the power. In china it’s the political elite. Allowing a disruptor to be killed is not justice, it’s just another form of power play.

I refer to self improvement in terms of putting myself in a position to make more moral decisions.

But yeah, life is a series of contradictions and false starts

[Discussion] What I have taken from Buddhism

I would say my philosophical mindset is an ever expanding garden fertilised by nihilism, stoicism, and buddhism. I try not to fetishise philosophies, leaders, or people and try to learn something from every ideology I come across. …

[Discussion] What I have taken from Buddhism

Just wanting to get peoples thoughts on the subject…

Sorry for the break everyone, it’s been a hectic couple of months. Here we go, fermenting cider. …