Do they want users to switch to the fediverse?

fyi that is a kde developer. I think he works on neochat

yeah, it’s Carl Schwan, one of NeoChat’s maintainers (and a very nice dude)

Copy paste of the blockchain section if anyone want to avoid reddit trackers:

Community Points exist on the Ethereum blockchain, which uses similar technology to Bitcoin to guarantee that ownership and control rests with you.

Why the Ethereum blockchain?

Ethereum is a general-purpose blockchain with smart contracts that enable programmable tokens, like Community Points.

How is this built?

On Ethereum, Community Points are run by a suite of smart contracts that manage balances, distribution/claiming, and purchasing memberships. The smart contracts also leverage existing parts of the Ethereum ecosystem, such as ERC-20 token standards.

The smart contracts have been reviewed and audited by Trail of Bits, an independent blockchain security firm.

What is gas, and who’s paying for it?

Transactions on the Ethereum network cost “gas”, which are micro amounts of Ethereum’s native cryptocurrency (Ether). Since most Redditors do not have Ether already, Reddit will cover their cost of gas for now, through meta-transactions and the Gas Station Network. (This only applies when using Reddit Vault to access Community Points. Using other Ethereum wallets may require users to pay for gas costs themselves). We plan to adopt better scaling and gas solutions in the future as they emerge.

Which Ethereum network is this using?

Community Points are currently on the Rinkeby testnet (through summer 2020), and balances, transactions, and memberships may be reset during that period.

Afterwards, we will be migrating Community Points to the Ethereum mainnet. Points balances will be carried over (though will need to be reclaimed).

Why was this needed?

Some of the scarier points. They seem to be adding power users, whose votes on polls are weighted by their community points: 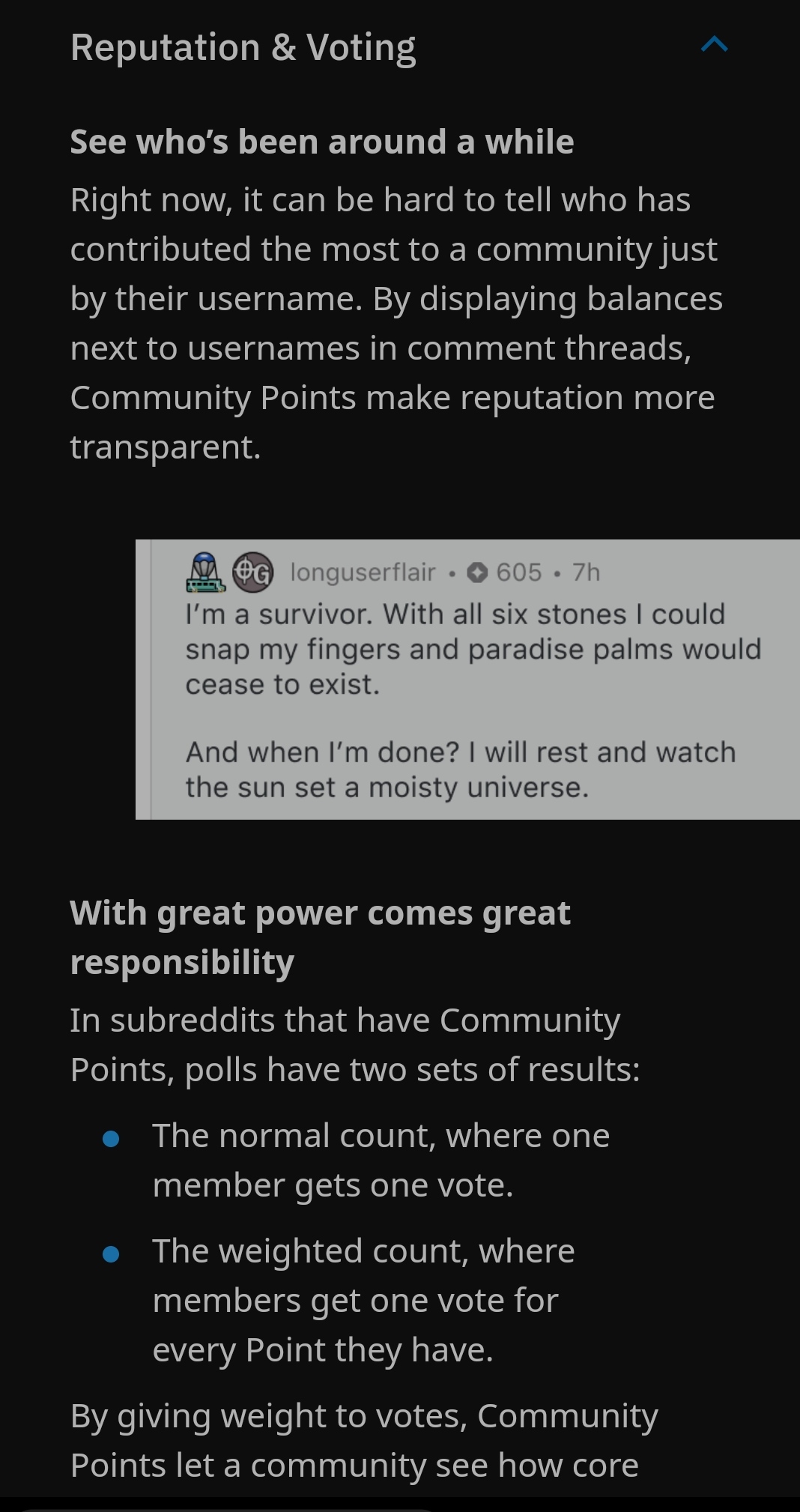 Not that reddit isn’t already easy enough to game, but if this is successful, they might use it to change default sorts too. 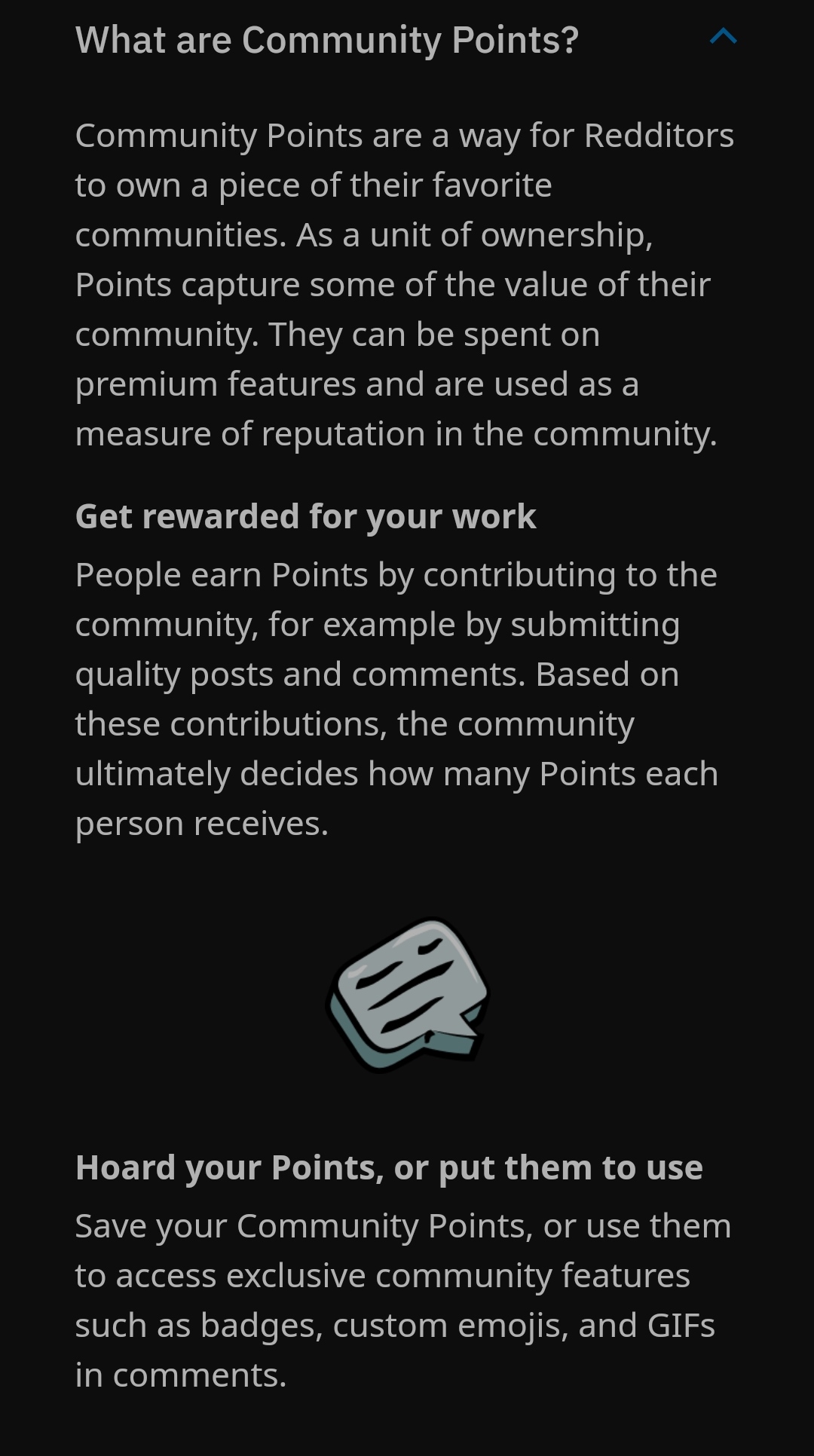 They’re bloating the eth blockchain by doing these as eth contracts:

Please hold your CIA ID card up to the webcam for poweruser registration.

Eh, both of those serve no real purpose anyway.

In all seriousness: I actually hate how much threads can get spammed by the new gif feature gimmick. They almost never add anything of value to the discussion and take up a ton of space. Slide for Reddit doesn’t support them at all and I feel like I’ve missed nothing.

They seem to be adding power users, whose votes on polls are weighted by their community points

I almost expected a link to join lemmy at the end of that little presentation.

do you want to help with net neutrality? start using our closed source cryptocurrency which is centralized! /s

I think the bigger problem is that you cant seem to opt out of the cryptocurrency integration. That could potentially piss off a lot of people.

Redditors love money grifts, the hogs are gonna eat up this slop even if it empties their wallets faster than gamestop trades.

Page doesn’t work on {old,i}.reddit.com and you can’t even create a vault on desktop, you need to use their bloated app. Lol no

Any crypto-anything solution that isn’t 100% open source is 100% a waste of time.

i’m not sure i’ve ever done this, but can someone please make a tldr?

I mean, I’m not surprised, but still.

“NTA. Your investment your rules.”