Sweet! Learning about political and economic systems from a stock trading company! They can’t possibly be biased or trying to advance an agenda!

when you definitely know what socialism is

A lot of people piggyback on popular movements to gain power.

I never read any of his writings but I’m guessing Hitler never really believed the socialist stuff. It was just a rhetorical tool to let him connect with his audience.

Idk what he believed in man, but he for sure started off with socialist ideas for the Volk. He loved mass movements, we might call him the founder of populist propaganda but it would be a disservice to other dictators. Trying to pretend that part of history didn’t happen is misleading and anti-democratic ya know…

I don’t think people totally flip their ideals half way through their careers. If you think of other evil authoritarian supremacist people, Margaret Thatcher, ian paisley, etc (though all had very different personalities in other ways) they dissent start off altruistic or considerate or tolerant. People tend to keep the same ideas the while way through their lives.

Works be interesting to hear if Hitler was different.

Might wanna pick up a book my man, could learn you can mix a lotta things

No. Surprisingly good snopes article below about how the fascist movements in Italy and Germany united with private enterprise and big capitalists of those countries, to crush worker unions and socialist movements.

There’s also a very good chapter in Zak Cope - Divided world divided class about how german capitalists like Krupp and AG Farben were the nazis biggest contributers. It was a movement of the haute and petit bourgeoisie to crush the threat of organized labor.

Lol the big man quoting mighty Snopes and Zak Cope on me. I don’t even know who tf that is but what I do know is that all the 10 people who downvoted me are dumbasses who slept during history class. Mussolini spent the majority of his years writing in socialist journals and leading socialist groups, until he got in too many controversies and was thrown out of those groups. He then went right wing exclusively for money problems. Hitler has a similar story, and this applies to other fascist dictators as well. Y’all looking mighty dumdum imo

Socialism is explicitly internationalist, and anti-captalist, while fascism is pro-capitalist and ultranationalist.

Socialism, unlike Marxism, does not repudiate private property. Unlike Marxism, it involves no negation of personality, and unlike Marxism, it is patriotic… We are not internationalists. Our socialism is national. We demand the fulfillment of the just claims of the productive classes by the state on the basis of race solidarity. To us state and race are one.” - hitler

I take issue with this. Socialism has been incredibly successful everywhere its been implemented. There are some people calling themselves socialists, who accept all the capitalist propaganda about actually existing socialism at face value, and unfortunately they often do dominate socialist discourse in the imperial core. But anyone who has studied and learn about the USSR, Cuba, China, Mongolia in earnest, and learned from these movements, cannot but be awed at their achievements. The bottom article lists many of them for the USSR, and China in the modern day has some even more impressive achievements in lifting more people out of poverty than any other country in history.

This is a long topic that I can suggest more reading, but I recommend these introductory articles / videos:

This was all funded by wealth redistribution and equalisation, 75% taxation, and mandatory work participation for adults of both genders.

I mean, I definitely know that these two points are not correct. But could you please provide sources for these claims anyways?

Here’s a first hand account from Kitty Werthmann, a WW2 survivor from Austria who describes these events which she personally experienced.

“WWII Survivor Warns of SOCIALISM and GUN CONTROL! (MUST WATCH)” is your source? Seriously? I listened to the first few minutes and sorry, but Kitty Werthmann does not seem to know much about the NSDAP’s political standpoints.

This article describes the support which Nazis received from Austria’s Social Democratic Workers’ Party of Austria.

This section doesn’t provide any sources, but I guess that there were members among the Austrian social democrats for the Nazis. Don’t see how that is relevant though.

This one briefly describes the social welfare system which was instituted by the Nazis.

Okay, this is relevant: if we believe this section of Wikipedia, the ‘Nationalsozialistische Volkswohlfahrt’ did indeed provide “old age insurance, rent supplements, unemployment and disability benefits, old-age homes and interest-free loans for married couples, along with healthcare insurance”.

Nowhere does it say for whom these were provided and how effective these measures actually were; in fact, many of these benefits were actually already established in the Weimar Republic. Neither does this article support your claims of a universal basic income, “equal rights” (absolutely not, wtf), which were not only unfeasible for Nazi Germany due to the (pre-)war economy, but diametrical to their actual support of antisemitism, racism, homophobia, and eugenics.

So there were financial benefits for part of the population that were not hit by genocide, conscription or the Nuremberg Laws. But that is still not the definition of a socialist system.

Ah, alright, sorry; I did interpret your “equal rights” differently.

Equal rights can mean a lot of things depending on who’s speaking. Fundamentally though, equal human rights belong exclusively to individuals. This precludes groups having superior rights to those of the individual, such as the ability to levy taxes for example. If it’s extortion for an individual, it’s extortion for a group also. Majority consensus is no more valid in that situation than it is in gang rape. Hence you’ll find that no matter what rhetoric a government or group may spout about equal rights, unless they’re individualist anarchists, they’re full of shit. That goes for socialists just the same.

Not sure, what you mean by that. Individuals are part of groups; and if such interest groups demand equal rights, they are demanding these rights for each individual group member. Minorities sadly seem to have to band together in groups to achieve group representation and emancipation, but that doesn’t make them “full of shit”, no?

historical examples of countries/parties with Socialist in their names

Bad example, no need to rag on the already massively insulted DPRK and compare it to Nazi Germany.

Absolutely, the DPRK are slandered incessantally by Western powers and people when they essentially just keep to themselves. Meanwhile the West engages in imperialism and genocide around the world while pretending to be a paragon of morality compared to the DPRK.

The US killed off 20% of the population of north korea in the korean civil war. They dropped more bombs than were used in all of WW2, on korea alone.

What right does the US have to say who can have nuclear weapons and who can’t? Especially for one of the most targeted countries in the world by western imperialism? 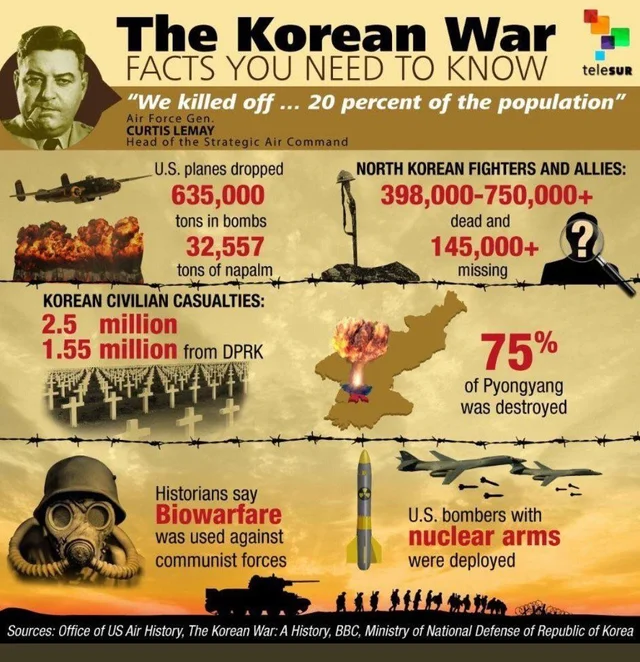 Secondly, the Kims are not a monarchy. They have never held absolute power despite what western media inundates you with. Rather they are appointed by the supreme people’s assembly, all of whose delegates are elected by universal suffrage! They don’t hold absolute power, they share it with the SPA and dozens of other elected officials from the WPK.

A state that continues the proliferation of nuclear weapons

US nuclear weapons in Germany, Turkey and other countries

that passes power down through a family like a monarchy

and regularly kills its own people for their political beliefs?

US drone strikes on US citizens in Arab countries?

No doubt that there are western nations that do the same, but that’s not a “get out of criticism free” card for the DPRK.

You’re right, western nations are doing worse. I dont see you criticising them, which tells me that you are just using these issues when they are convenient, but that you dont actually care about them. If you support western imperialism, at least be honest with others (and with yourself).

The DPRK gets the criticism that it deserves.

It is pretty interesting that westerners think their countries don’t have dynasties or entrenched ruling classes. Godfree Roberts has a great passage on this here:

History conditions much of our thinking about our political systems and most Western democracies resemble Rome’s in 60 BC when, as Robin Daverman humorously says, three aristocrats–politician Julius Caesar, military hero Pompey and billionaire Crassus–formed a backroom alliance that dominated the elected senate. The oligarchs ensured that proletarii votes changed nothing and that the masses remained invisible unless they rioted or died in one of the elites’ endless civil wars. Two thousand years later, in Britain’s general election of 1784, the son of the First Earl of Chatham and Hester Grenville, sister of the previous Prime Minister George Grenville, and the son of the First Baron Holland and Lady Caroline Lennox, daughter of Second Duke of Richmond, offered voters offered a choice of dukes. Today, in many European countries (even egalitarian Sweden) ‘democracy’ is a mere veneer over powerful feudal aristocracies that still control their economies. American voters recently watched a former president’s wife competing with a former president’s brother being defeated by a billionaire who installed his daughter and son-in-law in important government positions and ensured that, as John Dewey said, “U.S. politics will remain the shadow cast on society by big business as long as power resides in business for private profit through private control of banking, land and industry, reinforced by command of the press and other means of propaganda”. Most Western politicians are related by marriage or wealth and have, like all hereditary classes, lost sympathy with the broad mass of their fellow citizens to the extent that, as American political scientists Martin Gilens and Benjamin Page found, ‘the preferences of the average American appear to have a near-zero, statistically non-significant impact upon public policy’: Testing Theories of American Politics: Elites, Interest Groups, and Average Citizens