The protests in Kazakhstan now

We have been experiencing a rapid spread of peaceful protests in Kazakhstan - starting in Zhanauzen over gas prices (which increased 100%), quickly spreading in the West of the country. Almaty protests started yesterday. The military (Rapid Action Force) were dispersed to stop the peaceful protests. The calls from the protestors quickly took on an anti-government sentiment. The people started fighting back since the Rapid Action Force started using smoke bombs against them. Some representatives of the military allegedly joined the people. Now the city of Almaty is quiet. Transport doesn't operate, no social media except Twitter works. Many people cannot go to work. Many roads are blocked. The president declared the resignation of the government cabinet. The state of emergency has been issued for two weeks.
16
external-link

The protests in Kazakhstan now

Why do I still have hope for the future?

Why do I still have hope for the future?

external-link
Haven't posted a poem on PeerTube in a while. Poetry helped me deal with frustration and desperation for twenty years. Read the poem here: https://write.as/peace-labor-may/peace
fedilink
5
external-link

fedilink
@PeaceLaborMaytoCommunism@lemmygrad.ml•Dialectical materialism changed me in more ways than I could imagine
link
fedilink
1•10M

link
fedilink
@PeaceLaborMaytoCommunism@lemmygrad.ml•Dialectical materialism changed me in more ways than I could imagine
link
fedilink
3•10M

I started my channel on BreadTube because I didn’t know where else to do so at the time ¯_(ツ)_/¯ The clique-isness in online “leftist” circles is so annoying.

Dialectical materialism changed me in more ways than I could imagine

Dialectical materialism changed me in more ways than I could imagine

Do you have any recommendations for more current ethnographic studies? I found Fromm’s recounting of the Çatalhöyük findings to be enlightening.

Egocentrism and patriarchal legacy (The Origins of Family, Private Property and the State)

Egocentrism and patriarchal legacy (The Origins of Family, Private Property and the State)

Yes, it’s so hard to find good shows and movies. I watch a lot of “old” stuff because of this.

My lukewarm take on the Squid Game

My lukewarm take on the Squid Game

@PeaceLaborMaytoasklemmy•do you read comments before you respond to a post?
link
fedilink
10•1Y

I always read all of the comments first. I very rarely comment myself, because very often, what I have to say has already been said. The power of the collective!

We are one with mushrooms: micology and mutual aid

We are one with mushrooms: micology and mutual aid

@PeaceLaborMaytoasklemmy•Holidays are coming! What are you waiting for the most?
link
fedilink
30•1Y 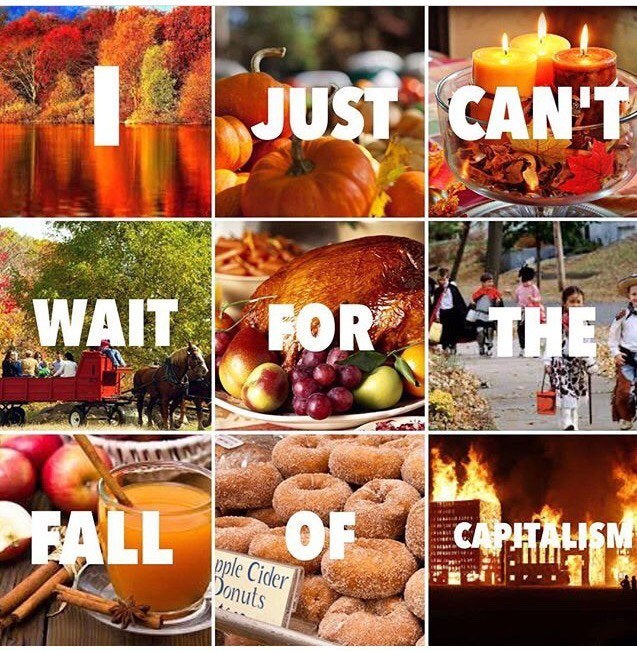 @PeaceLaborMaytoCommunism@lemmygrad.ml•To become a communist in the west, you must struggle with uncomfortable beliefs you own
link
fedilink
4•1Y

Why not deride christianity, lol? I was born far, far, from the imperialist core, and this rotten ideology of defeatism, individualism, the just world hypothesis, the myth of meritocracy, etc. has freaking wrecked my life. It had seeped into the collective unconscious in the lands that used to be united by the people’s power of the Soviets, and it had ruined many a life even before the collapse of USSR (Parenti gives a pretty good analysis of this in, I think, the second chapter of Blackshirts and Reds). I am a good example - I used to be my own freaking big brother. It’s dialectical materialism that has set my mind free. It’s comrades Lenin, Stalin, Mao, who were humans, just like me, who have helped me begin understanding the world. And I, by no means, blame “the rotten West” of all our woes, but Marx damn it, what we used to have in these lands - and what we could have achieved!..

link
fedilink
@PeaceLaborMaytoCommunism@lemmygrad.ml•So, has anyone been keeping up with the drama on Twitter over the role of patriotism, ML, and decolonization?
link
fedilink
1•1Y

Also, does anyone else notice how patriotism is revered, in some cases, almost fetishized by some? I’ve always had a hard time understanding what patriotism even is, before I came across Lenin’s and Stalin’s statements on self-determination and national struggle. I can understand a love for one’s land and people. But how can a modern person even feel connected to the land and the people in conditions of such alienation? It appears to me, almost as if modern day “developed” world’s patriotism is fueled by individualistic and opportunistic (if not outright egocentric) view of the world, a religious division into “us vs them”, and a banal desire to feel a sense of belonging (which, by itself, is not at all strange) - which may stem from not only a lack of understanding of history, but a profound disconnect with self.

link
fedilink
@PeaceLaborMaytoCommunism@lemmygrad.ml•So, has anyone been keeping up with the drama on Twitter over the role of patriotism, ML, and decolonization?
link
fedilink
5•1Y

Hey, this is an aside, but thank you so much for recommending An Indigenous People’s History of the United States. I found it a few weeks ago thanks to your posts!

How do you define support? Have you looked into dialectical materialism? One can support *an entity and still see the contradictions, and still strive for the resolution of these contradictions. This is said a lot - communism is not a religion. It is not a static set of rules and principles. It is a science, and it aims to resolve the contradictions of capitalism through materialist means. We should not succumb to the black and white dichotomy that monotheism has been instilling into us.

external-link
A more poetic take on the question of the rich. Read the text here: https://write.as/peace-labor-may/the-rich
6
external-link

@PeaceLaborMaytoSocialism@lemmygrad.ml•How to: mutual aid for the "underdog"
link
fedilink
1•1Y

You’re welcome, thanks for reading!

How to: mutual aid for the "underdog"

How to: mutual aid for the "underdog"

Yes, anyone can. It’s PeerTube, a decentralised, federated alternative to YouTube.

Thanks! Yeah, Breadtube is my “main”.

Erich Fromm’s Psychoanalysis and Zen Buddhism. Maxine Hong Kingston’s The Warrior Woman. Just finished Audre Lorde’s Zami: A New Spelling of My Name and moved on to her essays. Still am tackling Fromm’s The Anatomy of Human Destructiveness. Picking up Lenin’s assorted writings every now and then.