You should hide scores on Lemmy. They are bad for you.

The French gov is nothing more than a communication agency. They keep on making various announcements while doing the exact opposite. Nothing is done by this gov to actually improve LGBTQ+ rights. The Interior minister, for instance, who is responsible for law enforcement is alt-right and against LGBTQ+ rights. He is also currently accused of rape or sexual assault by several women and is known for his misbehavior toward women. In fact, several members of that gov are.

link
fedilink
@X_ClitoPrivacy•Cloudflare's latest tricks while using a Tor Browser - now blaming website owners for blocking you and removing their own logo from the block-page, to avoid faster recognition and association.
link
fedilink
19•2M

Well, that’s not entirely wrong: the website owner is responsible for contracting with Cloudflare in the first place.

@X_ClitoSecurity•Why are there no RFID fobs that make you click a button before it will transmit?
link
fedilink
2•2M

It is probably just a question of price per unit. Adding a button would increase the cost drastically. If you want security, you just don’t go with a RFID tag. You go with a smartcard protected by a PIN. Security-minded people are not the market segment for RFID tags. And if people are forced to use a RFID tag in a security context, they can protect the tag with a shield.

TikTok is "unacceptable security risk" and should be removed from app stores, says FCC

TikTok is "unacceptable security risk" and should be removed from app stores, says FCC

You can ask them in lemmy.ml/c/veganism We are open to people asking honest questions.

cross-posted from: https://lemmy.ml/post/343162 > How many nails does that coffin need?
3
external-link

How many nails does that coffin need?
12
external-link

Thank you for the clarification 👍🙏

external-link
Wordpress being able to force push code updates looks a lot like a botnet to me. And I'm not talking about compromised instances. What could go wrong?
5
external-link

You can generate “shadows” of the password with a scheme like Shamir’s Secret Sharing Scheme. These shadows can then be distributed to “unrelated friends”. Whenever you loose your password, you ask your friends for the shadows you gave them earlier and you can recover the password from the secret recovery procedure of the scheme. This prevents any single “friend” from recovering your password while allowing password recovery.

Thank you for your reply. What you described looks a lot like First Party Isolation: https://www.ctrl.blog/entry/firefox-fpi.html I don’t see how this is different, save for the fact that Total Cookie Protection (TCP… never seen this acronym before lol) does less than FPI.

I don’t understand the difference with First Party Isolation. Maybe I missed a key point while reading the article. Did you get it? If so, can you explain it to me? 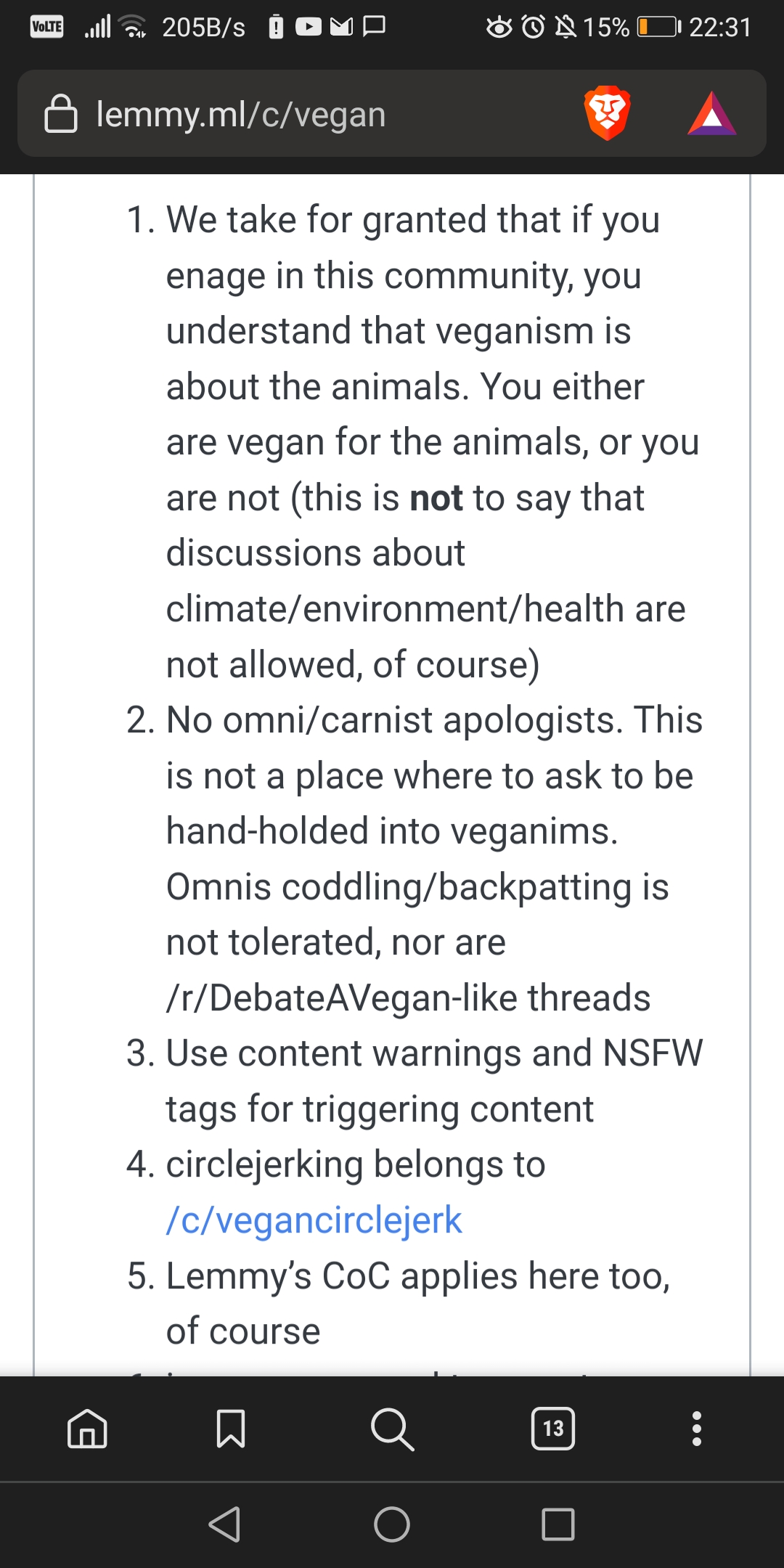 I don’t see how any of these rules were broken by my messages, but nevermind. Even if I were unbanned, I would not wish to engage with that community anymore.

I received confirmation from admins that this community members will not be banned site-wide just because we formed this parallel, more inclusive, vegan community. Let’s get back to the topic, shall we? 😉

The reason that the admin gave is:

I decided to alert other Lemmy admins about the behavior of that specific admin. I’m not trying to be unbanned. It was made very clear that the c/vegan is for radical vegans only and I’m fine with that. I just don’t want Lemmy vegan community to be forced to conform to the ideology of that admin or be stranded. Hence, I created this more inclusive community

Happy to have both of you here.

You are correct that there is a risk. I’m willing to take it because this is more or less the flagship instance of Lemmy, and I would “hate” if people finding Lemmy.ml and inquiring about veganism would only find the community of that admin.

If this community is banned, I suppose we will need to fallback on another instance, as you are suggesting. Are you ok with this strategy?

Yes, I knew about that and I find this an excellent feature! This is the reason why I’m asking about the “by default” behavior and not about “disabling score for everyone”. I like that this is optional. I’m asking the community their thoughts about having scores hidden by default ;)

Maybe they just like link aggregators and the classification by communities? I don’t use score-based sorting algorithms, precisely because I do not like how people vote on Lemmy.

I did not know that there are such options in Lemmy admin interface. That’s very good! Thank you for the information

Edit: According to the admin documentation, one can indeed disable downvotes but I don’t think one can hide scores for all users by default.

I checked and you are correct about beehaw. Thank you for the pointer. I’ll probably subscribe to their communities :)

Should scores be hidden by default?

Lemmy implements a scoring system allowing people to upvote or downvote posts. You know that since you are using Lemmy :) Score can be used to increase or lower visibility of posts, in particular when using some sorting algorithms (active, hot, top). This can be used to increase the visibility of good quality posts, and lower that of low quality or irrelevant posts. Yet, from what I observe, the tool is mostly used for communities to self-administer filter bubble. Some communities seem to behave like a hive mind, massively upvoting or downvoting until either the dissident is assimilated in a very Borg way, or excommunicated. Also, scores seem to be used often to convey cheap moral judgement, without having the need to expose oneself to criticism by providing arguments to sustain their opinion. Overall, I think scores are more toxic than useful, and I would be in favor of hiding them by default, so that new comers are not put out by them. What is your opinion about this? What are the advantages of having the score visible by default? Just a clarification: the question is not "should scores exist or not?". If people find value in scores, good for them. I'm not one to dictate other people preferences. :)
12
message-square

Should scores be hidden by default?

external-link
A excellent book for all vegan activists to improve their strategy, their communication and their actual impact on animal rights, and well-being.
1
external-link

Veganism is a radical movement.

I disagree, but I can feel the radicality of a newly converted in your words. Newly converted often come from carnism and it took them a form of trauma or sudden enlightnement to take the step. Often, after that, they are very radical, hating the world for not making the same choice they did. For being blind to the horrors. Then they learn that their radical approach is toxic to the cause and thus to the animals in the long run.

I have been vegetarian for 33 years, and then vegan for 7 years, and my parents taught me antispeciesism when I was a child. I’ve grown my whole life (40 years), knowing that I had a different take on things than most people. I had a lot of time to think about it and I acquired a lot of experience talking about animal rights. I learned over all these years that you cannot convince anyone with radicality. And so does L214, the most prominent NGO in France for animal rights. No radical French NGO made any difference, except for the few dozens they actively saved, while millions were dying every day meanwhile.

Even if the end goal is abolitionism, having a moderate approach, and pushing for welfarist laws are pratical ethics in action. They improve the life of millions of animals, help the public to understand the issues, and simply make you audible. Screaming your hatred at the world will just make you look odd and you are helping no animal that way. None. In fact, I dare say that radical veganism is even counterproductive because it scares people away. People that would cease to be part of the problem and even people that could convince others to stop being part of it. Domino effect.

I recommand that you read Singer’s book on Henry Spira’s life and methods. I recommend you read Full Spectrum Resistance. This might teach you a few things about convincing people and defending a cause.

Regarding symbiosis, organisms, including animals, can live together and be mutually beneficial to each other. Do you think your microbiota is taking advantage of you? Is it exploiting you? In a way it does, because it manipulates you and influences your psyche. Yet, you would die without it. You feed it, and it keeps you alive. Do you see where I am going? Sure, the microbiota is not sentient but you are. And you are the one being exploited, if we stick to your definition of exploitation.

I’m not gonna argue, as I said, because I know that people that are as extremist as you are cannot be reasoned with. Also, you are admin and you seem to have the ban hammer quite heavy, so I’m not gonna risk it. I left this community yesterday and won’t come back. Your approach is so extreme that you manage to scare away even other vegans/antispeciesists. This should give you pause as to how you are actually defending animals by having that kind of behavior.

Just a comment on that single sentence, because this seems all wrong to me:

Animal welfarism consists in the application of moral utilitarianism to individuals of other animal species.

I have no idea how you manage to conflate welfarism, utilitarianism and speciesism. Animal welfarism can and should encompass humans. Please notice how I said “If the relation between animals is symbiotic”. If I had a speciesist approach because of my welfairism, I would have said something like “If the relation between humans and animals is symbiotic”. Veganism is not about purity. It is about ethics and the living. By definition, utilitarianism is a branch of the philosophy of ethics. Since you said that “animal welfarism is not veganism” and you define animal welfarism as “the application of moral utilitarianism to individuals of other animal species”, my understanding is that you are not seeking ethics but purity and thus missing the point entirely.

I feel like I took the bait. You can now ban me.

Animal welfarism is not veganism

I disagree. This sounds like gate keeping. For me, veganism is about being against animal exploitation. If the relation between animals is symbiotic (mutually beneficial), I personally don’t think this is exploitation.

I don’t want to debate about it. I’ve already been down that road and it is not pretty. Vegans don’t win anything by tearing each other apart. But I want to offer a different vision of what veganism is to the OP.

Thank you for your answer. It clearly challenges my position regarding f2p games. I completely forgot about piracy, now having the chance of earning enough to pay for stuff, but you are correct and that is a very good argument.

Useless Use Of dd

Useless Use Of dd

2022, people still use and make new implementations of OpenPGP. In 2015, I was already describing OpenPGP as a horror show for cryptographers. People need to move on! The format is wrong. The implementations are wrong. The mandatory ciphers are outdated. The web of trust is mostly dead since the key servers are broken.
3
external-link

XSS vulnerability in Firefox via a SVG image

external-link
The attack scenario is not very realistic, but the details of the attack and why it caused a XSS are fascinating
8
external-link

XSS vulnerability in Firefox via a SVG image