Why is this so controversial? I stumbled upon a couple of memes about Pratt and the Mario movie and I have no idea who this guy is (the article just says he acted in a Marvel movie)

[misc] Deep Inside The Oldskool

A blog dedicated to oldskool hardcore and jungle from the 1990s. Featuring live sets, pirate radio shows, magazine scans and anything else of interest from back then. …

[misc] Deep Inside The Oldskool

Yeah, that quote is bullshit. Also because as far as I know, the list of people who saw a message is calculated from the max message ID each participant has read . There is no method in their API specs to mark a message as read. So the server doesn’t store this information, but just calculates it from data that was already available.

The only way this might “protect your privacy” is in a scenario where you haven’t opened a group for more than a week: the participants wouldn’t be able to know what’s the last message you’ve seen because they can’t access the “seen list” for old messages.

I believe these new features were supposed to be included in the recent 8.0 major update, but they weren’t done with the migration to 64 bit IDs yet at the time so they had to leave something for the inevitable 64 bit IDs update’s changelog…

riccardotoasklemmy•What would you do if you came across Jeff Bezos?
link
18•9d 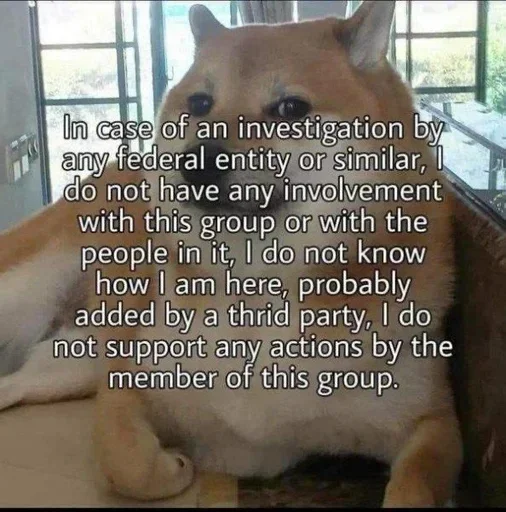 link
riccardotoasklemmy•What would you do if you came across Jeff Bezos?
link
2•
edit-2
9d

Still waiting for it to be available in my country :(

On my work PC I can’t install a system-wide VPN, but Mozilla VPN works also as a browser extension so it would be perfect for my use case

From the DDoSecrets wiki page: …

Oh, I thought it was an image uploaded to Lemmy! Thanks for pointing it out

Out of curiosity, what’s the meaning of the flag as a symbol for the fediverse?

Rollerblading. My little brother is very good at it so I decided to learn. Gliding on the street’s concrete is incredibly satisfying, when I started learning a few weeks ago I didn’t expect it to be so fun. I’m progressing slowly, but I’m looking forward my next holidays so I can invest more time to at least feel confident enough to ride alone without fearing to be run over by a car because I couldn’t stop at a crosswalk (seriously tho why getting used to rellorblade breaks has to be this hard ugh)

We have an active thread discussing the same topic starting from Matrix’s blogpost disclosing the vulnerabilities. I believe the blogpost is clear enough to avoid third-party news outlets proxing the news

Clarification, Sept. 8, 2021: A previous version of this story caused unintended confusion about the extent to which WhatsApp examines its users’ messages and whether it breaks the encryption that keeps the exchanges secret. We’ve altered language in the story to make clear that the company examines only messages from threads that have been reported by users as possibly abusive. It does not break end-to-end encryption.

It should be no surprise that messages reported by users are forwarded to Facebook’s moderators as plaintext so they can evaluate whether the report is legitimate or not. It should also be pretty straightforward that once an encrypted message reaches the receiver’s device, the client has access to the plaintext data to show to the user (and can do whatever it wants with it as long as nobody notices). We didn’t need this investigation to know these two claims are true.

However, the article brings up some interesting details about how this data is handled and packed together with users’ metadata:

Artificial intelligence initiates a second set of queues — so-called proactive ones — by scanning unencrypted data that WhatsApp collects about its users and comparing it against suspicious account information and messaging patterns (a new account rapidly sending out a high volume of chats is evidence of spam), as well as terms and images that have previously been deemed abusive. The unencrypted data available for scrutiny is extensive. It includes the names and profile images of a user’s WhatsApp groups as well as their phone number, profile photo, status message, phone battery level, language and time zone, unique mobile phone ID and IP address, wireless signal strength and phone operating system, as a list of their electronic devices, any related Facebook and Instagram accounts, the last time they used the app and any previous history of violations.

It is no news that WhatsApp can access a ludicrous amount of metadata and can share them with Facebook (in non-European countries), but it’s interesting to see this practical usage being disclosed for the first time. More on this:

U.S. law enforcement has used WhatsApp metadata to help put people in jail. ProPublica found more than a dozen instances in which the Justice Department sought court orders for the platform’s metadata since 2017. These represent a fraction of overall requests, known as pen register orders (a phrase borrowed from the technology used to track numbers dialed by landline telephones), as many more are kept from public view by court order. U.S. government requests for data on outgoing and incoming messages from all Facebook platforms increased by 276% from the first half of 2017 to the second half of 2020, according to Facebook Inc. statistics (which don’t break out the numbers by platform). The company’s rate of handing over at least some data in response to such requests has risen from 84% to 95% during that period.

WhatsApp has for years downplayed how much unencrypted information it shares with law enforcement, largely limiting mentions of the practice to boilerplate language buried deep in its terms of service. It does not routinely keep permanent logs of who users are communicating with and how often, but company officials confirmed they do turn on such tracking at their own discretion — even for internal Facebook leak investigations — or in response to law enforcement requests.

riccardotoasklemmy•How easy is it to self host a Lemmy instance?
link
2•
edit-2
19d

The yunohost app exists in the official list, but it’s labeled as broken and the docs link return a 404 :(

Would they? According to their recent blogpost about the controversy:

…just pasting their claims. If this is true, using a Swiss based, no-logging VPN would be enough to avoid your IP being revealed

riccardotoasklemmy•What are your most useful posessions?
link
5•
edit-2
20d

My e-reader. Being able to bring your entire library with you is something that I underestimated when I started evaluating whether I was actually in need for an e-reader. I bought an used Kobo Clara one year ago: the battery still lasts for weeks, and being able to whip it out every time I have some time to read and pick the book according to my mood is really something that I couldn’t do with paper books.

Tech aside: “classic” slippers. I’ve always used flip-flops my entire life. I bought a pair of slippers last summer and they are super comfy and they don’t hurt between my toes, which was the reason why I wanted to replace my flip-flops. I love them. This might sound stupid but it’s definitely one of the objects I own that I’m really happy I’ve decided to buy

Edit: I also forgot about my Bluetooth receiver with a 3.5mm jack plug. My car has Bluetooth support, but just for calls and not for media streams (why???). I had to buy this small Bluetooth receiver that I plug into my car’s jack (AUX cords were constantly breaking for some reasons) and it works like a charm. Bought in in 2016, really happy I did. I don’t have to burn CDs anymore

It was only a matter of time before alt-right instances championing “free speech” started to pop out - this is the first one I hear about, I was expecting them to adopt Lemmy earlier

Time to update my user.js file :)

Nitter uses a combination of public and private Twitter APIs, using the credentials they use for their own web client, and guest tokens. Nitter instances do not talk to each other, and no html scraping is done. I hope that answers your questions.

So weird that Twitter is ok with these stuff being “exploited” by third-party mirros. It feels like nitter is walking on thin ice. Hopefully twitter’s not going to act on this

Anyway thanks for the insight

Does Nitter simply scrape the webpage or uses a set of proxy accounts to login to Twitter and fetch the content (either by scraping or using the Twitter API)? Because if the former is correct, then this is likely going to break Nitter too

The first line says “your car, my breath”…

After Telegram was forced to stop the development of its TON project, an open letter from the open-source community asking for Telegram to transfer to the community the ownership of the ton.org domain and the [GitHub organization](https://g…

[16/07/2021] Security analysis of Telegram that exposes 4 cryptographic weaknesses in MTProto. The vulnerabilities have been disclosed to Telegram on 16 April 2021, and have been addressed with the release of version 7.8.1 for Android, 7.8.3 for iOS and 2.8.8 for Telegram Desktop. They do not compro…