Bad at spelling, grammar and semantics. Do ask for clarification if I wrote something unintelligible. I use Gentoo BTW.

therefore it is good for your health"

I sometimes like to lurk Reddit’s twosentencehorror, great to have it on Lemmy, too! (Even if I can only lurk on Lemmy, too, due to my lack of creativity…)

Akshually, woman scientists bad because they were forced to by communists

Akshually, woman scientists bad because they were forced to by communists

A Florida Anarchist Will Spend Years in Prison for Online Posts Prompted by Jan. 6 Riot

A Florida Anarchist Will Spend Years in Prison for Online Posts Prompted by Jan. 6 Riot

A Night With Palestine’s Defenders of the Mountain

A Night With Palestine’s Defenders of the Mountain

The Gemini FAQ (gemini://gemini.circumlunar.space/docs/faq.gmi) got this to say about Markdown (and I agree with it):

2.9 Why didn’t you just use Markdown instead of defining text/gemini?

The text/gemini markup borrows heavily from Markdown, which might prompt some people to wonder “Why not just use Markdown as the default media type for Gemini? Sure, it’s complicated to implement, but like TLS there are plenty of libraries available in all the major languages”. Reasons not to go down this route include:

Of course, it is possible to serve Markdown over Gemini. The inclusion of a text/markdown Media type in the response header will allow more advanced clients to support it.

I think “30% of Americans were in favor of bombing Agrabah” would’ve said it better, even if the number is slightly lower. Why mention just the Trump supporters, when 50% of self-identified “moderate liberals” also supported it? Here’s the full statistic (sorry, can’t link the source, I took this screenshot from a video that quoted this statistic):

Relatedly, look at these actual headlines published by the New York Times: 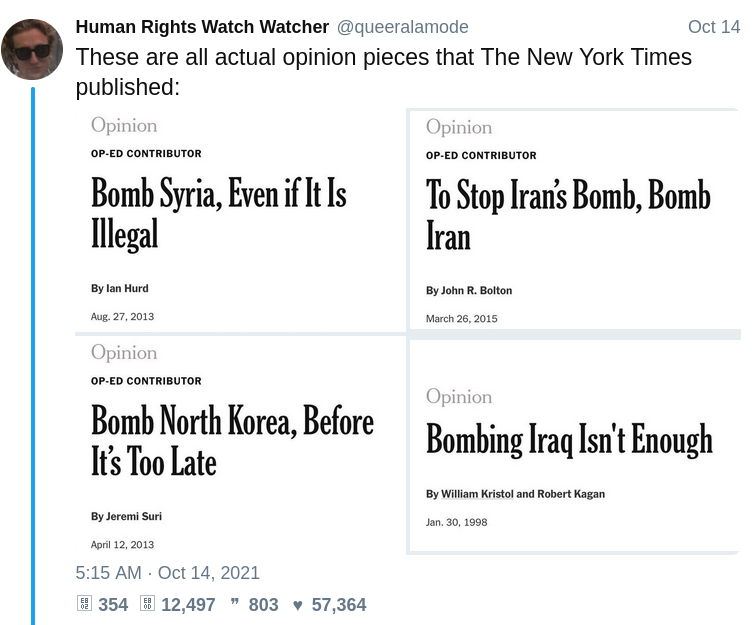 That name is very inconveniently chosen…

Look at the background too, the depiction of construction, agriculture and industry is wonderful…

Interview: The Man Who Seized the Pueblo

Interview: The Man Who Seized the Pueblo

Stand up for the Revolution | Palestinian Resistance Songs

Stand up for the Revolution | Palestinian Resistance Songs

The Lemmur devs recently said they made it available on iOS as well. However, not yet in the normal App Store, but something called Testflight. Here’s the announcement: https://lemmygrad.ml/post/20309

Here’s their Testflight link, it explains how to install Testflight: https://testflight.apple.com/join/6jyRg5aI (I never tried this myself, though, because I don’t have an iOS.)

We can still hope

We can still hope

Octocat or something IDK I'm not Github

(Maybe this isn’t considered a meme, but I don’t know of a better community to post pictures like this to…)…

Octocat or something IDK I'm not Github

Lemmy recently added a feature to block communities so that you don’t see them. You can click on your username, then “Settings”, “Blocks”, and put the spider community (or any other) into the list to block it. This way, no need to see spiders if you’re arachnophobic.

I used to host a Minetest server to play with a few (no more than 5) friends on a computer that had 1GB RAM. It worked, and the performance was fine, so depending on how big you’re intending to make the server, 4GB may be well enough.

I haven’t tried it myself, but this Minetest Forum post lists a few settings you can adjust to get better performance: https://forum.minetest.net/viewtopic.php?f=10&t=1825

There’s Lemmur. You can get it here: https://f-droid.org/packages/com.krawieck.lemmur/ (or in Google Play, if you don’t use F-Droid). You can use it to browse lemmy.ml, Lemmygrad, or any other Lemmy instance.

Epoch Times? The Falun Gong newspaper? They’re not trustworthy in any meaning of the word.

That’s not the point of this comic, but now I want to know why she has a catgirl(?) sleeping on her couch…

Here’s a thread from 5 months ago about this question: https://lemmygrad.ml/post/19795

I usually just say “Lemmy users” for clarity, but I also like “lemmings”.

May I ask what failed a build step for you? (Most likely I can’t give you any advice, as I only got into Gentoo a few months ago, but I’m still interested in knowing.)

I actually had some trouble with installing Gentoo myself, though it didn’t fail any builds for me. I needed full-disk encryption. I followed this guide (except for the part about configuring the kernel; I’m using the pre-configured distribution kernel for now), but it didn’t work. On boot, Gentoo would throw an error message about “Failed to find LUKS device”, then exit to the fallback shell. Searching the message gave me this forum thread, I tried several of the things that thread says to. What finally made it work is dracut --force -H --kver <gentoo-kernel-bin-version>. I need to re-run this command every time I upgrade the kernel to a new version so that the new version works.

Mostly Gentoo, sometimes Debian. I’m thinking of installing Qubes OS, but first I need to figure out whether my device fulfills its requirements.

Of those not mentioned yet:

NoScript, to block any JavaScript except from sites that I explicitly allowed. Note that when you install the extension, you should go to the settings and remove most of the sites allowed by default, since there’s no good reason to actually have them allowed.

link
@nour@lemmygrad.mltoGaming•Tux trying to deliver tofu while some kids have a race or something
link
3•2M

I don’t understand this… Where’s the tofu?

“The C Programming Language” is a good book about C. Really helped me understand that language. It’s a book on paper, but it shouldn’t be hard to find a PDF (here’s a link to a PDF).

I fully expect to be banned from this site for this post by the blind, indoctrinated, bigoted and narrow minded individuals who run it.

You joined just 7 hours ago, and the first thing you do is to yell at this community. Bruh.