The thought of having discord/matrix communities for discussions is a nightmare. So here’s my idea, what if we had a chat application. but for lemmy. …

Well, I’d say if it’s a community with productivity as the goal; like drawing, guitar or whatever skill. It’s positive. on the other hand if It’s not, you’re likely wasting your time on random discussions that you weren’t really interested in, you’re gonna keep talking about things you already know because it intrigues you that people are talking about it in real time. You wanna discuss or ask questions? try a forum, that way you (and other people) won’t have to be in the cycle of explaining stuff.

just from my own experience

You didn’t mention spaces in which you have my respect. I had enough ptsd from discord.

I’ve tried it. It’s ugly. but snappiest one out there. I’m now using it.

I’ll try it then.

that’s good to know, I’m having the issue linux desktop though

Element is failing in explore rooms. I’m trying to join one and it’s just stuck on loading…

font is Arial from Windows, of course GTK theme is Win3x Enhanced, icons are from Chicago95 Wallpaper is #BF4040 Program Manager is PCManFM, the other is Double Commander QMMP media player with https://archive.org/details/winampskin_Triple-Chin-Skin skin

I might have changed a few things a bit but for the general look you can just install the themes and customize it to your liking.

My DE was XFCE at that time. 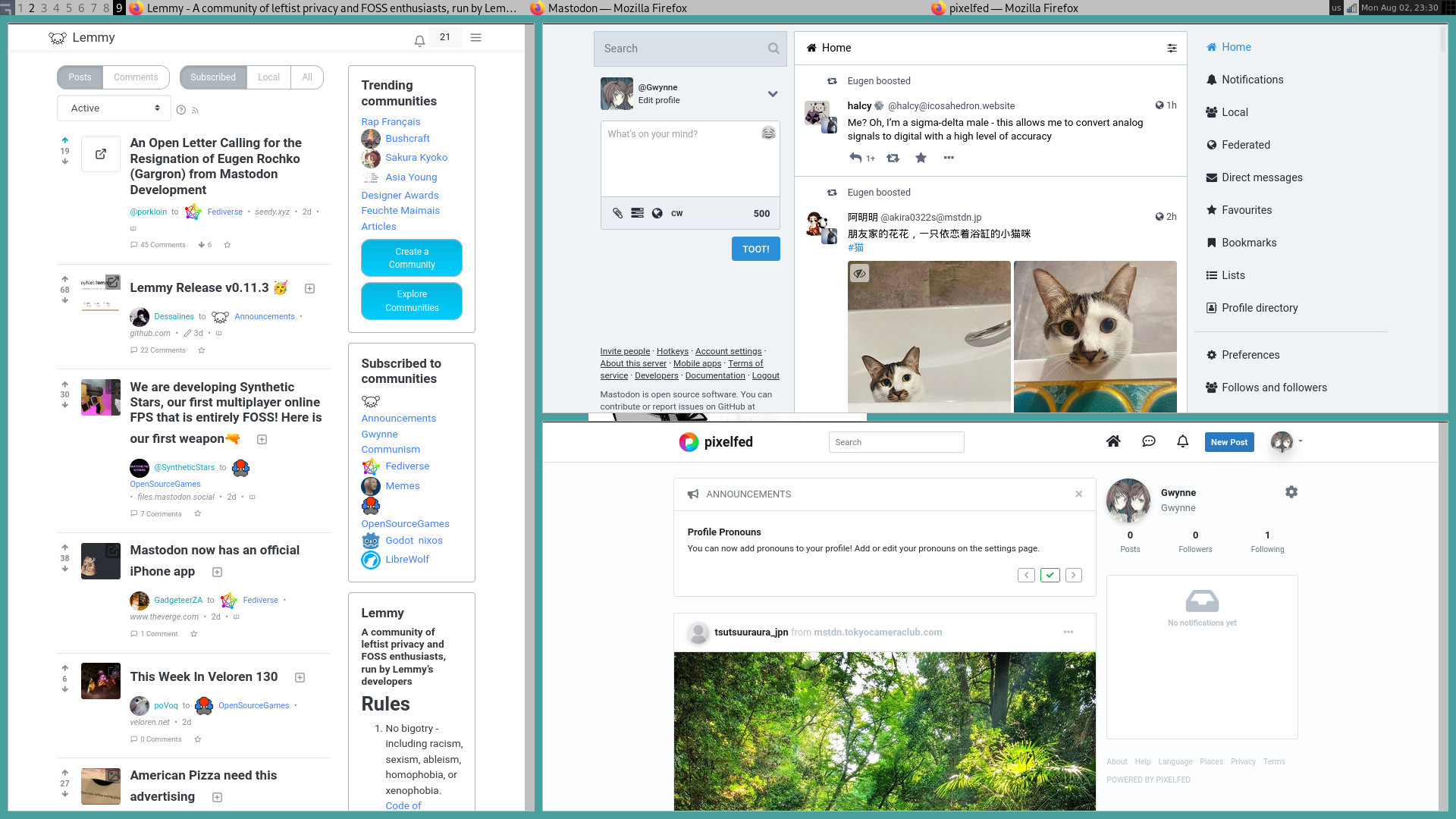 Deleted accounts and the posts aren't deleted from other instances, Bug?

I can pretty much view everything here: https://lemmygrad.ml/u/Gwynne@lemmy.ml…

Deleted accounts and the posts aren't deleted from other instances, Bug? 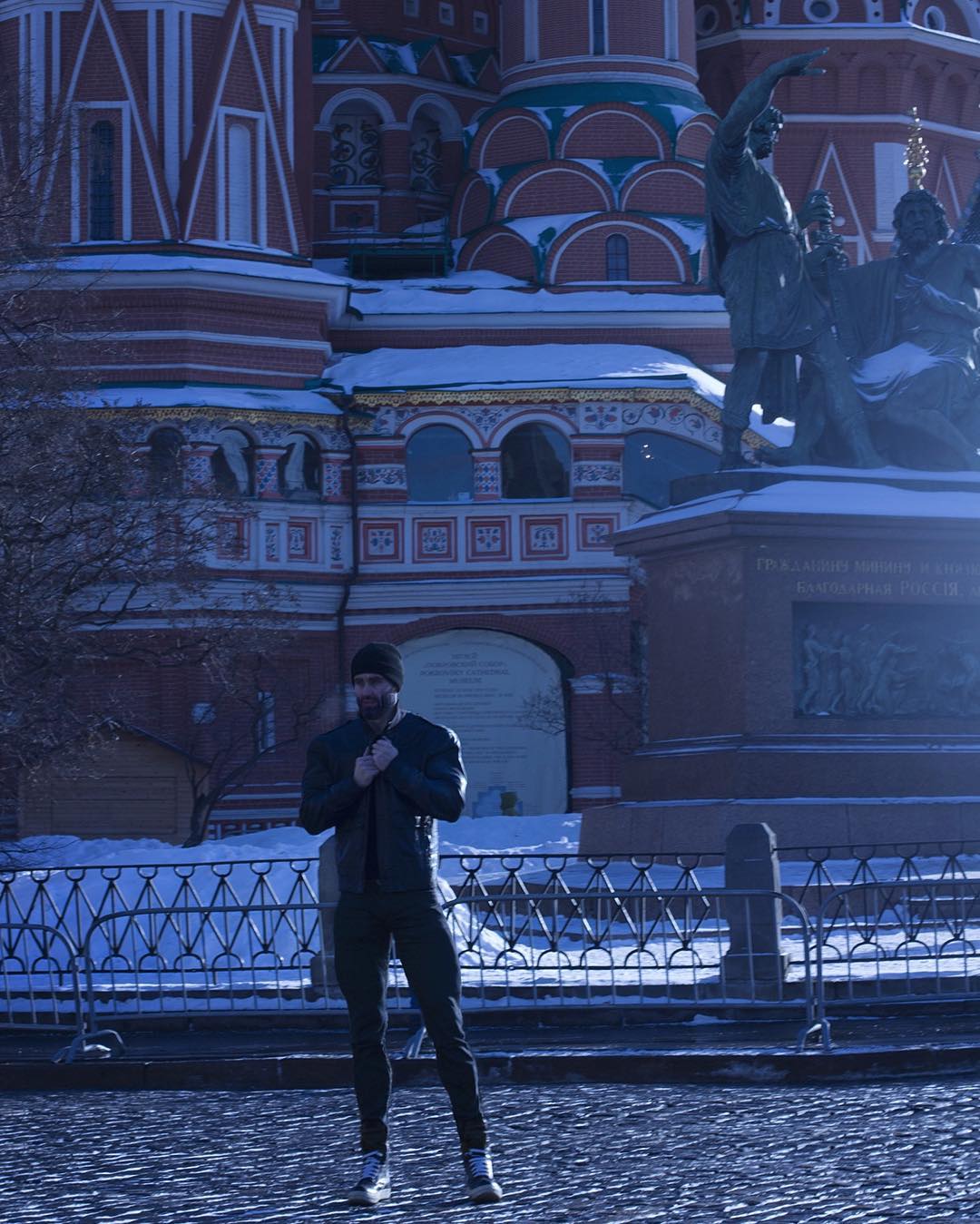 @Deadnaut@lemmy.ml @gohqoi@lemmy.ml I didn’t pay enough attention when reading it. after looking into eunomia and mastodon blogs I changed my opinion.

some criticism to their arguments:

The point of federation is to have small instances so you could moderate it easily. So, understandably It’s hard to moderate such large instances.

from @gargron “To those upset about some design decisions in the iOS app: Nobody’s forcing you to use the iOS app. I’m fully aware that it takes a different turn from all other existing apps in some aspects, and that’s the point. If it makes the fediverse larger by retaining more new users, then I’ve succeeded and everyone benefits. If not, nobody except me loses.”

Money is money, some funding could definitely help the development of mastodon even if It’s from them. Plus, at first the sponsorship isn’t obvious, it doesn’t affect anything.

It’s gonna be decentralized and open source. if your account is public you’re not getting alot of privacy in the first place; I think this kind of data scraping is positive. on a political standpoint bad actors would have a hard time telling lies to us. personally, I think eunomia could make social media less of a place of disagreement and more a place of discussion. Since this thing would make it easier for people to research into sources. and trust it based on reputation, collectively.

they’re trying really hard to find negative things on him.

Mastodon App is just the tip of the iceberg of Eugen’s mismanagement. In 2020, he has allegedly taken over €60,000 to partner with the European digital surveillance data collection firm EUnomia. EUnomia’s operations are better summarized by this post by paulfree14 on librenet.de. Eugen is literally selling out Fediverse users to data collection agencies, not exclusively limited to users on Mastodon instances as they scrape public posts. EUnomia has in the past sold this data to large advertising companies, namely Google, as well as law enforcement agencies. This poses a risk to marginalized groups who are targeted by police on a daily basis.

Jesus christ, I’ll have to get the hell out of mastodon.social soon

How about just hosting for pleroma first? since It’s;

While were here. I’d like to address theming on several context. on linux we should have at least one client that uses gtk for theming. …

I’m a masochist, the longer the password is the more I enjoy it

That website is definitely more user friendly, I’ll just use this instead of explaining to people everytime. thx

is there a particular reason you used jabber as the name instead of xmpp?

Does it truly support voice and video calls? XMPP

I tried two up-to-date servers. Even tried with my friend. The option doesn’t allow me to. I’ve downloaded the dependencies for calling and the tick in gajim appeared, meaning I could do calls. …

Does it truly support voice and video calls? XMPP

I really enjoy me some DISTRACTIBLE podcast

I really enjoy me some DISTRACTIBLE podcast

Is there such a thing as online social anxiety?

You know, if I were to go outside and talk with anyone, I could do that fairly well. Not the same with the internet, Every time I write, I do it with careful thought and sometimes it gets really anxious. …

Is there such a thing as online social anxiety?

Tomorrow I’m gonna record a gameplay and start a youtube channel. I’m planning on joining peertube so people can reach out to me here. any suggestions?..

What kind of communities would you like to see active on lemmy?

I need a feedback on what people are interested in. …

What kind of communities would you like to see active on lemmy?

I gotta use whatsapp and I have no choice. What are my options?

Already know no matter what if I use whatsapp, facebook is gonna harvest my data for the AIs and sell them to unknown third parties. My concern is how safe is it for me to install on my main android? I’ve got lineageos on it. …

I gotta use whatsapp and I have no choice. What are my options?

How do I turn off my communist brain?

I hadn’t give any contribution to comrades. Maybe it stems from that. it seems from of my overwhelming desire for a change starts to make me think about it all the time. When I watch movies, talk to people, on writing sessions and even sometimes when I’m passive, I still imagine what a better place …

How do I turn off my communist brain?

I don't know how to do microblogging

I own a mastodon account. but often times I just look at the screen and wonder what exactly do I write. People often update stuff about things, post some art. and maybe just tell mundane day to day life. …

I don't know how to do microblogging

Fediverse video ideas anyone could make. just some suggestions.

I suggested making a youtube channel dedicated to the fediverse. but there’s alot of diverse topics to cover. let me list some example stuff: …

Fediverse video ideas anyone could make. just some suggestions.

Hello everyone, It's Gwynne.

Hello everyone, It's Gwynne.