This is a great reason to move away from docker lol

The Sisyphean Task Of DNS Client Config on Linux
plus-square

The Sisyphean Task Of DNS Client Config on Linux
plus-square

I use borg backup and I am very happy with it.

I really just use evil-mode with gruvbox-dark. If you want to mess with a version of my emacs config, boot this in a VM and press alt-e to spawn a new emacs frame. alt-shift-enter spawns a terminal and alt-numbers switches workspaces. The browser in that ISO is luakit (alt-p to open dmenu). I have other key binds listed here.

As for how the website works, I just got lucky with hack.css existing and managed to finagle it into using a gruvbox dark theme. A lot of my other sites use gruvbox.css (for an example see here or here). I try to aim for that sweet spot between minimal, hackery and functional. I think I’ve done the trick, but it’s mostly been on accident.

I have my personal API rigged to auto-post everything to Lemmy, so following this community is probably one of the best ways to keep up to date. I also have a infrequent newsletter in case you want to read from the stuff that I didn’t really think was good enough for the main blog. I’m considering moving that to my main site somehow, but that’s effort and I’m feeling lazy.

I’ve wanted to try and make my blog look and feel like my emacs config, and I think I managed to pull that off pretty well. I have the stickers on Telegram if you want to get the pack links. 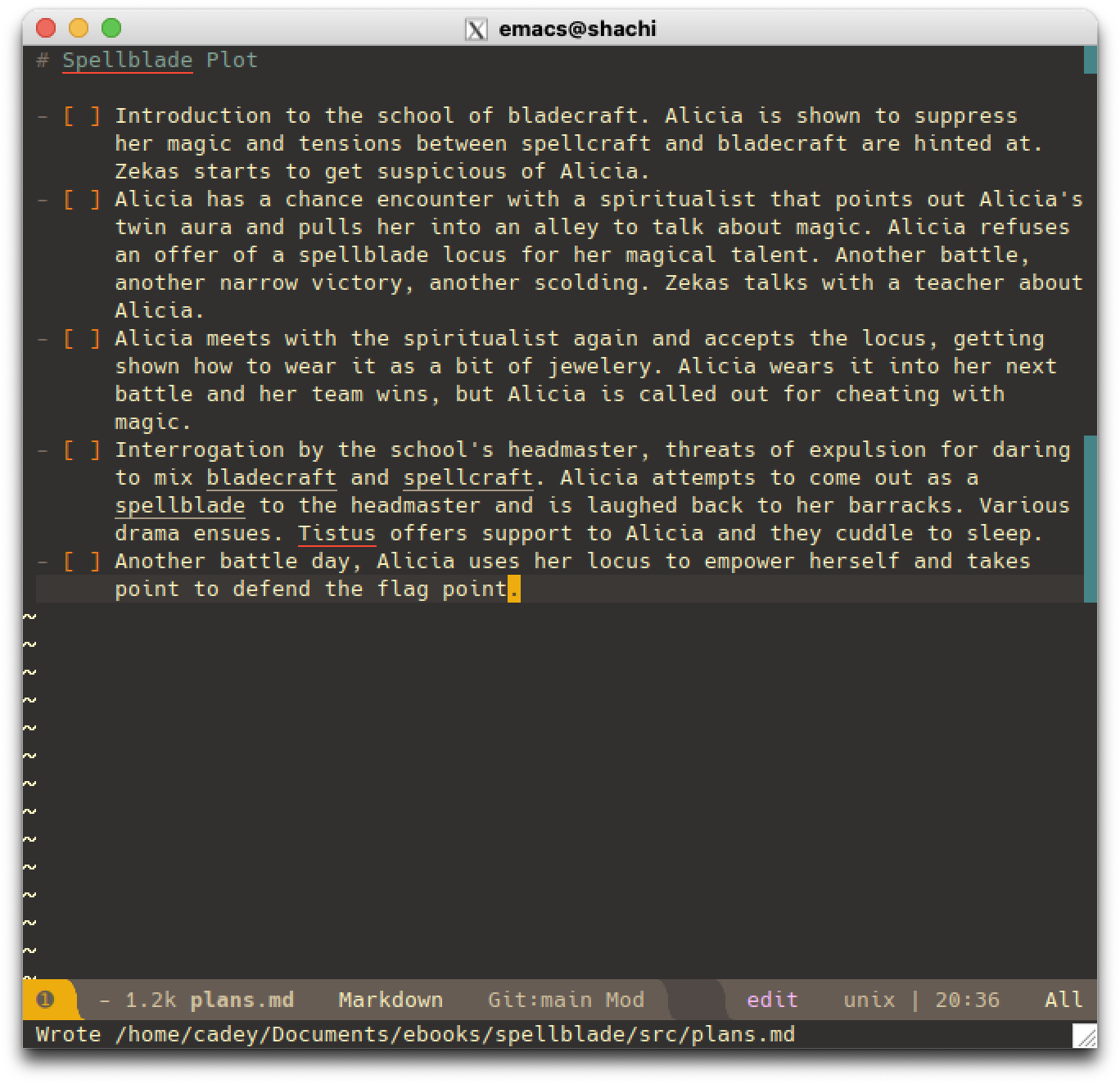 I’ll add that to my list! OpenBSD isn’t something I’ve really dug into much due to a lack of experience (and to be honest NixOS has ruined me so much that everything else looks lame). I have a huge backlog though, writing this novel (the screenshot is some of the planning I’m doing for it) has been a massive time sink but I hope to have something out by fall of this year.

Ever since the update accessing lemmy.ml/api/v2/user/login 404s for me

A Trip into FreeBSD

A Trip into FreeBSD

I have no name, and I must recurse

I have no name, and I must recurse

Using Nixos as a router

Using Nixos as a router

On the Missed Opportunities of Static Types

On the Missed Opportunities of Static Types

Pkgsrc does this. It’s just a huge pain.

A Model for Identity in Software

A Model for Identity in Software

To reject gods and spirits is easy: just bully them away in the name of science. …

Cadey A. Ratiotoasklemmy•Do you want to pick a programming language for me, Lemmy? 🐱‍💻4•3M

My Thoughts on Paper Mario and the Origami King
plus-square

My Thoughts on Paper Mario and the Origami King
plus-square

I think that did it. Thanks.

Is there an old copy of the API docs around? The ones that explained how you authenticate over HTTP and websockets?

How do you authenticate though?

Where did the API documentation in the documentation go? There used to be this great listing of all of the API calls but it seems to be gone now?..

Cadey A. RatiotoTechnology•christine dodrill asks if social media was a mistake11•4M

Author of the article here. I’m not really critiquing your questions as much as just giving them my own answers and input because they are really good. Your response to post is probably worth being its own blog article on its own.

You’re not “posting up” something on Twitter any more than you’re “publishing” something when you send in a Confession to Seventeen magazine and they take something like it and sell ads next to it. But with the Internet, it’s close enough that people get the illusion that’s what they’re doing.

Yes, so much this. Twitter is an advertising company. Trump must have been paydirt to them. He brought such a captive audience under the most abusive terms. They must have made millions off of his vile posts getting on the news, making people check the website/app to see if it was actually true.

Twitter benefits from making people feel hopeless or angry because those emotions gear people towards interacting with the app/website more. It’s only natural that the algorithm driven feeds tend to push towards content that makes people feel that way (this was probably not the intent when such algorithms were developed, but that is definitely the effect I have seen unfold).

What does it mean that the Internet has such a huge place in people’s lives and such a vanishingly small fraction of people could even explain to you how a page shows up in the browser?

The fact that so many people are so illiterate about technology saddens me. It is central to our lives and almost nobody knows how it works. Part of the goal of my posts on my blog are to explain how technology works so that more people can understand. I try to start from as clean as slate as I can, and I hope my intent gets across.

How does it impact our ability to adjust to it as a civilization?

In my experience I’ve seen technologists come across as literally magic beings that do unexaminable things to make the internets go. It probably doesn’t help that things are so damn complicated that it’s hard to actually explain things from a moderately clean slate, especially when distributed systems get into the mix.