Send Secure MessageSend Message
Joined 7M ago
cake
Cake day: Feb 21, 2021
help-circle
rss
@nikifatoAnarchism•If you find out that lemmy isn't suitable for you anymore, where would you/we go and why?
link
1•18d

You mean my question is always invalid when tested by reality?

But today’s Marxist-Leninists are not all hardcore Lenin fanboys

And then most tankies when I call them tankies:

Please call us something-Lenin. …but sure, Lenin isn’t among their masters. I don’t buy into this.

wow, I was already wondering if you gonna refer to the collective experience/history of slavery, colonialism and what not all of black people, and argue that referring to some Marxist-Leninist as tankies to be the same logic. It is not! You did not experience this sort of repression, so stop claiming as if there’s some similarity between me calling you a tankie, and discriminating, triggering, devaluing…etc. black folks.

your thinking is so white I can even smell it.

you’re aware that dev of lemmy use the term tankie as a self description too?

You mean like Lenin? It’s not “some”, it’s the majority, and it’s their leaders.

Again, I’m only making those point to show how your original point has been very missleading. I’m not saying that this is a credible source or something it’s just a source you used for your claim so I picked it up.

fine, so let’s make it a circle.

you and your original point that links to this only source that I used within this discourse:

Even US state department denies the Uyghur genocide. Give it a rest already.

“The U.S. State Department’s Office of the Legal Advisor concluded earlier this year that China’s mass imprisonment and forced labor of ethnic Uighurs in Xinjiang amounts to crimes against humanity—but there was insufficient evidence to prove genocide,…”

Some more quote from the article:

“Secretary Blinken and I have made clear that genocide has been committed against the Uyghurs in Xinjiang,”

“I have determined that the People’s Republic of China is committing genocide and crimes against humanity in Xinjiang, China, targeting Uyghur Muslims and members of other ethnic and religious minority groups,”

“For example, the torture, rape and sexual violence committed against Uyghurs likely constitute genocide ‘by causing serious bodily and mental harm’—the second type of genocide recognized by the Convention,

“More than 1 million Uighurs have been detained in reeducation camps, and many have reportedly been subjected to forced labor and sterilization. China has committed numerous crimes listed in the convention as acts of genocide, including the prevention of births and infliction of bodily or mental harm on members of a group and the compulsory separation of children from their communities, according to human rights groups.”

I explained that the source for your claims is not credible

I used YOUR source that YOU used for YOUR claim. Without you using it as a source, I would have never used it as such.

I ONLY used it as a means to proof the manipulative character of your argumentation. Me not following your rhetoric lead, is just me not joining your gaslighting.

Dronie refers to the fact that anarchist positions are always aligned with US foreign policy.

hmm, ok. This wouldn’t fit me. I’m opposing US foreign policy in most parts, not all I must admit. I’m for: Dismantle the US empire. It’s just a phrase, but I mean it like that.

You haven’t addressed a single point that I made

I did. I addressed your original point. Then you wanted to talk about something else and I said, no, I’m not going to follow you into this rabbit hole, let’s first stick to the original point. If anytime someone makes an argument that makes your argument become logical inconsistent, you start to distract with something else, no point following you into the rabbit hole. Because all you want is to win, but I don’t gonna join your rules.

I can be ideologically opposed to anything, and still take the courage to engage with such individuals. I don’t want to live in cult, with anyone part of that just going to agree with me. I let my ideas be confronted by those who oppose me. They will either stand or be dismantled. Both will have a positive outcome for me, and that is learning. Either I stand corrected afterwards, or I will have learned more about your habit, thought patterns and communities. This is intel activity, done by an random anarcho[…]

I wouldn’t understand what dronie is so that term might not well serve the purpose if used to address me. If you address me as anarkiddie, it be enough for a tiny giggle, but then I’ll be remembered how that term is actually discrimination against children. It helps to reproduce adultism over and over again.

What I’m aware of is that there is no credible evidence of any sort of genocide happening in Xinjiang.

Why is it always the same rhetorical methods you (are you ML?) people use?

Telling someone they are wrong, and they just need to read a bit more into it. Then they read a bit more into it, from the source you linked and notice that your entire argument is nothing but manipulative but they anyway use the arguments from the very source you linked as a means to show you how pointless your comment was…and then, like nearly always, people like you will then argue: no, no, all false: read this very long thread.

I did read some threads on that subject from some MLs already. They all had one thing in common:

forced labor is actually something good in this case. But look this is an ideological debate. You think it’s good, I think it’s bad. There’s no point debating that I should change my value system.

I recommend you to read some other articles by this author

I did already, not my favorite author but I haven’t read anything that is comparable bad with ML

I am aware of that. The author admitted their wrong doing, and because of his behavior stepped down as moderator, at least temporarily. I don’t know about the current status. To those he caused the most harm by his behavior, they made piece with it and remain in friendship afaik. If you need the backround story to all that, I can dick it out for you.

However some anticiv people are really just crypto eco-fascists

some primies are like that. I did read threads how ziq makes fun of their nonsense.

link
@nikifatoAnarchism•If you find out that lemmy isn't suitable for you anymore, where would you/we go and why?
link
-1•1M

ok, propably I missed that. Lot’s of text there. you mind writing a TL;DR?

link
@nikifatoAnarchism•If you find out that lemmy isn't suitable for you anymore, where would you/we go and why?
link
1•1M

link
@nikifatoAnarchism•If you find out that lemmy isn't suitable for you anymore, where would you/we go and why?
link
-2•1M

his question aims to look at alternatives, not why we should remain using lemmy or any lemmy instance.

I must admit I don’t know the author to well, but usually when people claim this anti-authoritarian is as bad as this authoritarian in regards of ziq (the author), people refer to his anticiv position. Anticiv get usually misrepresented and miss understood. I can understand why, but that doesn’t make them as bad as the “tankie”.

If you need a read on anticiv theory, you might enjoy reading something from Abdullah Öcalan leader of the PKK, which has Marxist-Leninist tradition.

xD. I get the Joke @TheAnonymouseJoker. Hope you wont get to much downovtes by those not understanding the actual joke. xD Because this might not be obvious to others reading here I give a short explanation:

It’s a common practice by tankies and of those who come at their defense, to make some claim/question about “shit lib” or CIA, and it doesn’t matter if it fits the current argument or not. Usually some conspiracy follow after that.

The joke here is to make a pun out of that behavior, by injecting that “CIA” claim at a moment it just doesn’t servers well.

And here’s why: Someone tried to gaslight an political opponent by linking to an article that they claim to be about “Even US state department denies the Uyghur genocide”. So all I did is to quote some parts of the text, as a means to break the gaslighting spell. And now, the source that was original used to prove that that genocide did not happen, if used by a non-tankie it is CIA propaganda shit libs believe in. And because this art of debate is so absurd, it creates some laughter for some. On the other hand it is also very anoying, because you can’t have any serious logical consistent debate with anyone who argues like that.

If you find out that lemmy isn't suitable for you anymore, where would you/we go and why?

this question aims to look at alternatives, not why we should remain using lemmy or any lemmy instance. …

If you find out that lemmy isn't suitable for you anymore, where would you/we go and why?

Afghanistan: The Taliban Victory in a Global Context

Afghanistan: The Taliban Victory in a Global Context

“In past when Taliban took-over the control of Kabul, young ppl supported them & welcomed them but this time things are change. The youth of Afghanistan is on roads & they are removing the Islamist Taliban flags. Taliban are facing a huge protests around the city.” https://twitter.com/WorkersSolidar…

Radical Graffiti: "Women in Afghanistan and Iran against the savagery of Taliban and Mullah" 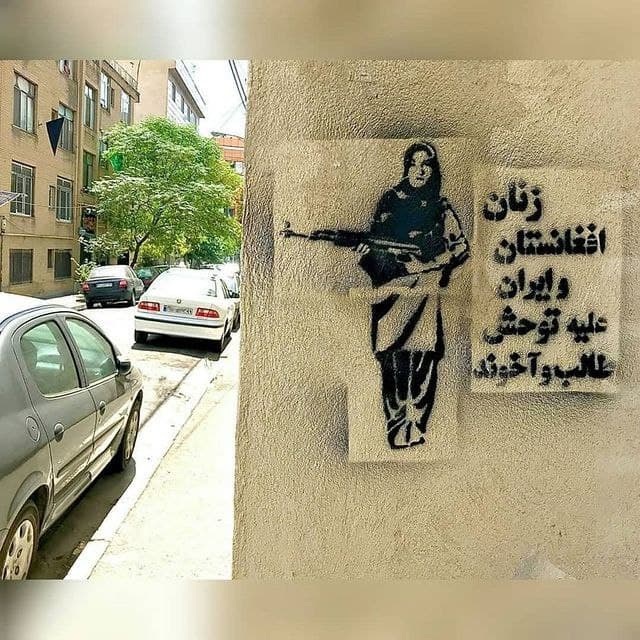 Radical Graffiti: "Women in Afghanistan and Iran against the savagery of Taliban and Mullah"

The Bolsheviks and Workers' Control - The State and Counter-Revolution

"The Bolsheviks and Workers Control is a remarkable pamphlet exposing the struggle that took place over the running of workplaces in the immediate aftermath of the Russian Revolution. In doing so not only does it demolish the romantic Leninist “history” of the relationship between the working class …

The Bolsheviks and Workers' Control - The State and Counter-Revolution

What is your take on, Lemmy being run by Tankies?

What is your take on, Lemmy being run by Tankies?