Flat memes are the best

I just realized we’re having a “serious” discussion on /c/memes right now. I’ll just leave this here then 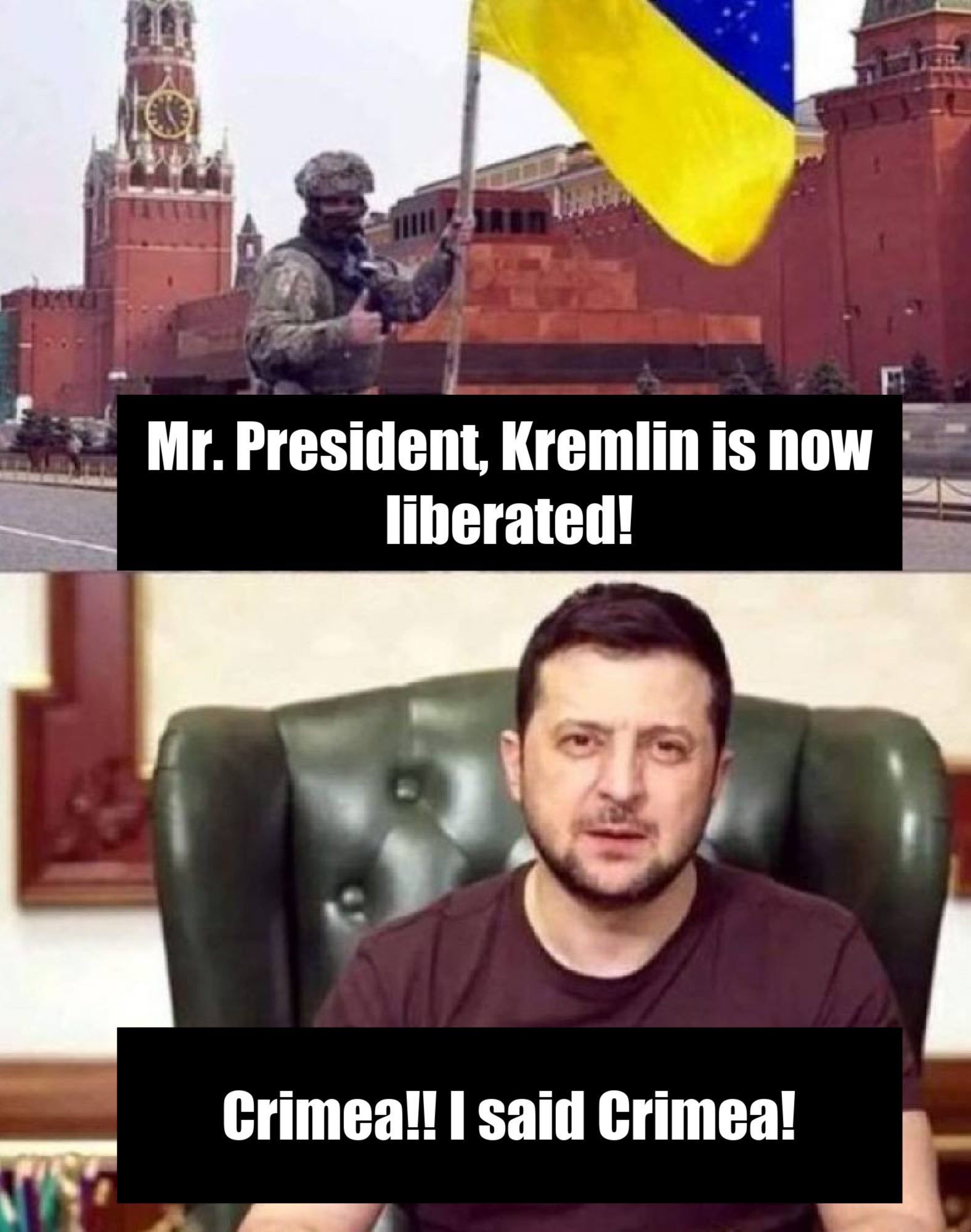 Taking territory is only meaningful if you can hold it

Correct. And they absolutely can hold it. On the first try it took Russia months to take it, and I don’t see how they can do that again, given all the troops that were involved are now in Kherson. But I guess we’ll just have to see.

Lol no. Literally just take a look at https://twitter.com/UAWeapons and you’ll see tons of abandoned and destroyed Russian vehicles. They were completely overwhelmed in Kharkiv and did not plan this. Of course it’s not all precisely geolocatable but it has to come from somewhere.

This is a war of attrition

Correct. And majority of the Russian army is in Kherson with their back towards a river with no bridges. Supplies are limited and they are unable to move a meaningful amount of vehicles in or out of Kherson. This is completely unsustainable in the long term.

It sure is expensive. But Kherson has tied so many russian resources that Ukraine now managed to steamroll through Kharkiv. It doesn’t matter whether Kharkiv was just an orderly retreat (it wasn’t) or a “sign of goodwill” (it wasn’t) or a rout (it was), Ukraine just wants their territory back. And there is “steady” progress on Kherson too, at least more steady than LDPR progress on Pisky and Bakhmut

zero evidence that HIMARS have made any strategic impact

HIMARS is the reason Russian logistics are completely fucked in Kherson. It’s also the reason for the rise in “smoking accidents” in ammo dumps on Russian occupied territory.

So in Russias hands they do have strategic impact? Also please tell me the name. I’m looking for something with about 80km range, less than 10m deviation at max range, and which is actually used by Russia. So far I have only seen them use Kalibrs for comparable targets, and those are much more expensive than HIMARS rockets and easier to intercept. It’s also questionable how many of those are still left.

I’m done with this thread, we both know this discussion won’t reach a conclusion. I’m interested to see where our points will stand in another 6 months

The Kharkiv offensive won’t decide the outcome of the entire war of course. But with how little the front has moved in the last two months, this sudden change is pretty big. It was also very unexpected because everyone kept talking about Kherson before. Every bit of territory matters to Ukraine, and I guess they saw this was the most lightly defended part.

Izyum and Lyman provide an additional axis to attack Sloviansk and Kramatorsk. (Successfully) attacking from that direction and from the east could have allowed Russia to encircle and therefore conquer a large part of Donetsk Oblast. Now they can only attack from the mostly heavily fortified east. Taking Donetsk Oblast was one of their big plans, right? Well it just became much harder. Also Luhansk is now open to attack from the west, with the only big defense being the Oskil river. That’s where the main front is, right? Luhansk and Donetsk Oblast, the Donbass region?

Also there was a lot of equipment left behind. Russia still has a lot of tanks at home, but it still hurts, especially when the enemy is able to make use of it. Lots of POWs as well.

What did they gain in the last two months? Pisky? With all 6 inhabitants? Their area gains are miniscule compared to what just happened in a span of days.

Russia had no gains in Kherson for a while now and some small area losses. The fight there is extremely expensive for both sides, but Kherson is currently in a similar situation as Severodonetsk was a few months ago, just with the sides switched. There are no working bridges over the Dnieper, making supplies extremely difficult because they have to be ferried over the river. And those ferries are constantly harassed by HIMARS strikes. With no hope for properly supplying the area, it is basically already lost. It’s just a matter of time, and Ukraine has the logistical advantage

Kupyansk is a critical node to supply Izyum and Lyman. Russia did heavy fighting for weeks to take these two cities and constantly launched attacks from there, binding a lot of Ukrainian troops. With Kupyansk gone, Izyum is fully cut off (and already confirmed taken) and Lyman is now very difficult to access for Russians (rail access is gone and the major roads lead to ukrainian held territory) as only small side streets are left for the Russians. Proper logistics to Lyman are pretty much impossible now and it’s a matter of time until Russia has to leave it too. Rail access to Severodonetsk is also gone, but it can still be supplied through Svatove, so I don’t think it will change hands soon (unless the rumours of Russians abandoning Svatove are true, which I doubt at this moment).

I also doubt Russia will counterattack anything in Kharkiv in the near future. They announced fully retreating from Kharkiv oblast and there’s already confirmations of ukrainian troops in cities/villages north of Kharkiv even though they shouldn’t be really affected by the attack on Kupyansk. They might hold on to the east of the Oskil river though, in an attempt to keep Severodonetsk

Yeah snap firefox always took a while to launch for me. My real problem though was that it just seemed to ignore my systems DNS settings so I couldn’t use it to access internal websites in my VPN, and there was no simple fix for that. Just installed native firefox from some sketchy repo instead

Or it was yet another pump and dump

There are lots of governments and their capabilities vary wildly. Of course there’s the big trust issue with Apple itself, the US government, most of Apples supply chain, and the governments of those suppliers. But this still leaves out many groups who really want to get into peoples phones, and their only option is finding zero day exploits to get in. This mode vastly reduces the attack surface for them.

I wouldn’t touch an iPhone if I had to do something with US government secrets though.

And who knows which government sellers of hardened phones belong to.

Yes, it leads to a lot of good art criticizing censorship

I think this mode is meant to protect journalists and other common targets of high profile attacks from zero day exploits. The most common vulnerabilities used for such attacks are in exotic file types, browser bugs, voice/video calls, and of course USB when physical access is possible. This mode vastly reduces the attack surface.

Installing Android custom roms may be good for privacy, but unless you pay a lot of attention to the details you will not be very safe with the above mentioned threat model. After flashing, many people keep the bootloader open, have root, maybe USB debugging, possibly didn’t encrypt the filesystem (I think Android does that by default now though). And depending on your device you can be lucky if your ROM is maintained at all, keeping up with security updates on top of that is a lot of work for a handful of volunteers.

And common targets of high profile attacks are often not very tech savvy. A single magic button that turns off many risky features is really useful. I want it in Android too

This has unfortunately been going on for decades. They bulldozed many many places. There’s a Wikipedia list. It also says over one hundred thousand people have been displaced just for brown coal mining in Germany. Here’s a map of the largest brown coal mining area. The grey villages have been destroyed and the orange ones will be next. It’s sad how this destruction can go on while everyone else is much more concerned about luxury issues like speed limits

link
fedilink
@UnreliantGianttoGreen - An environmentalist community •China is beating the world on yet another climate technology: electrolyzers for creating hydrogen
link
fedilink
4•7 mesi

Cool project though, could be really useful to indie game devs and animation studios

Thunderbird does it too

NATO? You think Euromaidan is a creation of NATO? If anything you might mean the US here. Right wing regime? Yeah there were right wing groups involved, but they didn’t exactly make it into the government. Poroshenko wasn’t good either, but he was democratically elected and certainly not worse than Janukowytsch. I can’t attest to the validity of those elections though, I wasn’t there. Also Zelenskyy is of jewish heritage and no far right party gained a seat in the 2019 government, you can hardly call that a right wing regime.

Russia was perfectly fine with Ukraine doing its own thing

You’re aware Janukowytsch was basically Putins puppet right? That’s not Ukraine doing its own thing. I’m still convinced Putin enabled this whole mess in eastern Ukraine because he lost his puppet and wants to bring it back. If Ukraine joined NATO, that would become impossible. This is why Putin is so scared of NATO

Russian invasion of Ukraine is not justifiable, however it’s reductionist to ignore the reasons behind why the invasion happened.

Disagreed. I believe if NATO didn’t expand to the east (those countries joined voluntarily by the way), Russia would have caused much more chaos there in the past 30 years. Or maybe it could have worked out better, we will never know since it didn’t happen.

plenty of experts in the west have been warning about this

It’s easy to find people who predicted the future when it’s already in the past. But in the present things are not as obvious

That’s it from me

Russia literally spent 8 years trying to get meaningful security guarantees from NATO, and it was stonewalled. Stop trying to rewrite history.

Do you know why NATO troops are deployed at their eastern borders (“enhanced forward presence”)? Because of the annexation of Crimea and the Donbas war. Of course Ukraine wants to be in NATO when their neighbor does stuff like that. Russia brought this to themselves. And with that they’re trying to play the victim in this story. They want security guarantees? How about they guarantee the security of their neighbor first and get out of there, then there might be a chance to talk

Why is the second statement absurd? Okay I overdid it a little, but placing tens of thousands of troops at a border for months is a huge logistical undertaking and certainly not something someone would do just like that. I don’t know a reason to do this other than to invade a neighbor

WhatsApp/Instagram/Facebook is down right now

instagram.com returns 5xx Server Error and from what I heard Facebook Messenger and WhatsApp messages are not delivered
5
message-square

WhatsApp/Instagram/Facebook is down right now

Hi, I created this account to check out lemmy. When I created it I left no E-Mail address and I entered a long password (90-100 chars) containing only letters and numbers which was generated by my password manager. However, when I now try to log in from another device or browser, it just tells me the password is incorrect. I still have access to the account because it's still logged in to the browser session I used to create it. I also tried changing my password to a shorter one in the settings, but it doesn't let me do that because it again thinks my password is wrong. Did anyone else encounter something similar? Could there be an issue with using extra long passwords? What can I do to fix this? I also lost my actual first account https://lemmy.ml/u/ReliantGiant (what's the correct way to refer to lemmy accounts?) to this problem...
10
message-square