Yeah, that’s kind of the thing. The more expert-focused / niche the distro is, the less hand-holding you can expect.

But if you do show that you’re not just being a dumbass and have put in some effort, then you’ll usually find a number of those experts (and potentially even distro maintainers) willing to help you, which can resolve pretty much any issue you could imagine.

And them using their expert time to walk you through hell and back is extremely nice, too. But whether you get to experience that niceness depends on your own level of expertise, because they do not have infinite time.

Because they’re trying to find any way whatsoever to get rid of AdBlock Plus. They’re not looking for justice, they want an unjust decision in their favor.

Don’t think I’ve ever heard “what the entire fuck” before, but I definitely understood it, so that probably proves something…

Yeah, I kind of expected it would have that. 🙃

I didn’t want to confuse @a_Ha@lemmy.ml even more, since I doubt they would dive in that deeply. Especially doesn’t make sense when DWM comes pre-installed with the distro, as you need to install it yourself to be able to patch it.

I can see this being useful for parsing. You often want to report all of the parsing errors to the user in one go, so collecting them into a list or iterator is useful.

And I’m guessing, “evert” is simply the respective English word: https://en.wiktionary.org/wiki/evert
As a non-native speaker, I didn’t know that word either…

Yeah, at a previous job, we had hand scanners with embedded Windows on them. It looked like Windows 98 and might even have been a fork from it. I definitely couldn’t imagine a modern Windows running on those low-powered devices.

Ah, now I gotta nitpick you on your Firefox facts.

Firefox mostly uses the XUL/XPCOM toolkit, which was written by Mozilla. It only references the GTK theme for how it should theme itself, and it makes use of the GTK file picker.

XUL code is rather similar to HTML, so one can also use CSS to style it, which is what this theme does to make it look more like a GNOME application.

I think, most of the available window managers have a shortcut for switching between windows (which might be a different shortcut than Alt+Tab).
And I think, most have a mode for resizable+pannable windows (usually called “floating windows”).

One window manager which does not have those, is DWM.

(I have not used Axyl, but I have used some of those window managers on other distributions.)

So, is this an optional, third-party theme? Or will this be how Firefox looks on GNOME by default?

Wow, I didn’t know they were working on those captured identifiers. That’s pretty huge…

I don’t know what you’re referring to in regards of Amazon, but as for Google Analytics, they have a contract with Google that prohibits them from processing the data for anything but providing insights to Mozilla: https://bugzilla.mozilla.org/show_bug.cgi?id=697436#c14

Is there anything that makes Firefox more opensource than Chromium?

Well, that’s why I didn’t name Firefox as a particularly good example of open-source, just a reference for the manpower needed.

I do think, they work more in the open than Chromium. And because the Mozilla Foundation is legally a non-profit (of which the Mozilla Corporation is a 100% subsidiary), they don’t really have that profit-motive behind their decisions (they can only use money to pay their employees or to develop their projects further), so they tend to make decisions more in line with the open-source expectation. But yeah, I would still certainly prefer, if more of the development was done by the wider community.

In fact, is your point that it would be better if there were no professional developers and only projects run by communities of hobbyists?

Nah, I would just like it, if companies wouldn’t tout their projects being open-source, when that’s basically just misleading many users. Which is most definitely a lost cause, so that’s why I’m in favor of just letting the “open-source” term die and finding a better word.

Brian Acton was one of the founders of WhatsApp, but he left WhatsApp a few years ago. Supposedly, he regretted selling WhatsApp to Facebook, which is why he got involved in Signal.

Sure, but just because you’ve open-sourced something at some point, doesn’t mean you have to maintain it for free forever. If we require that level of commitment, no one is ever going to open-source anything.

Well, you might not have chosen to run Ubuntu. At $DAYJOB, we can get a Linux laptop, but only with Ubuntu. I’m really not a fan of Ubuntu, but it is less of a pain in the ass than running Windows with a Linux VM.

I mean, I don’t have deep insights into Brave’s development either, but they only have around 150 employees (according to https://craft.co/brave-software ).
I doubt there’s numbers out there for how many Google employees work on Chrome, but the Mozilla Corporation has around 750, which they only just cut down from 1000 ( https://www.theverge.com/2020/8/11/21363424/mozilla-layoffs-quarter-staff-250-people-new-revenue-focus ).

As far as I’m aware, Brave doesn’t really tweak much about the rendering engine (Blink) either, which is probably the biggest chunk of code in Chromium. So, they would need to build up a lot of expertise.

And finally, well, long-term security may also require feature development. Chrome and Firefox both have developed forms of sandboxing. Mozilla published a new way of doing sandboxing via WASM not too long ago. So, yeah, you kind of need to continue innovating, which requires manpower.

As for forking Chromium versus a piece of KDE software, the difference is that with Chromium most of the development work comes from one entity, Google. You would pretty much need to poach these employees, or build up a huge team of your own, to be able to move the project in a different direction.

LibreOffice might again be a better example. OpenOffice was maintained by Sun Microsystems and they provided a bunch of infrastructure and held the brand name, but most of the development work came from the wider open-source community.
So, when Oracle bought Sun Microsystems, those developers organized, created The Document Foundation, and set up their own infrastructure. So, the maintainer changed, but the developers largely stayed the same.

Hmm, I don’t really agree with that article. The thing is, publishing something as open-source is trivial.
But, despite the opposite being written into basically all open-source license (“is provided as-is”), we expect every published piece of software to come with updates ad infinitum.

And you can’t really plan for it. You can release many pieces of open-source software that no one will ever use. And then one of them happens to become popular by chance and suddenly you’ve volunteered for the role of Benevolent Dictator For Life.

I guess, you could leave the software published and as-is, i.e. stop releasing new versions, but I’m honestly not sure that’s truly better for the users. By breaking their builds, they’ll know they have to migrate to something else. If you just leave it unmaintained, security problems will creep in and bugs will remain forever unfixed.

There is a popular framework for using JavaScript to write backend applications, which is called Node.js.
And then for that framework, they created a package manager, the Node Package Manager – NPM.

Nowadays, NPM is used even for frontend code and independent of Node.js, because there is no real other package manager for JavaScript.

I don’t understand the implication, what is it that makes a hard-fork impossible? In fact, isn’t Brave a hard fork of Chromium?

Well, my definition of a hard fork is that you take the state of a project at a certain point in time and then you largely carry on development on your own. For example, LibreOffice was a successful hard fork from OpenOffice.

So, I don’t see Brave as a hard fork. They are very much dependent on Google continuing to open-source the Chromium code. And they don’t really have the capacity to make larger changes to the code base, or even just maintain the status quo, if Google decides to make changes that go against Brave’s interests.

In my understanding, while the freedom of forking the project is certainly determinant in the question of whether it is open source, I don’t see any relevance in the one of creating a fork that can get popular enough to strip the original project of its users.

Yeah, that’s why I wrote that they are technically open-source. They fulfill the official open-source definition, but they don’t match up with the subjective expectations that people often have for open-source.

So, for example, if you think of VLC, GIMP, KDE or other community-driven projects, they may be shit in one way or another, but they would never make a change with which the majority of the user base disagrees.
That’s what I personally think of when I hear “open-source” (although I have started calling it “community-driven”, to disambiguate it from those shitty open-source projects). 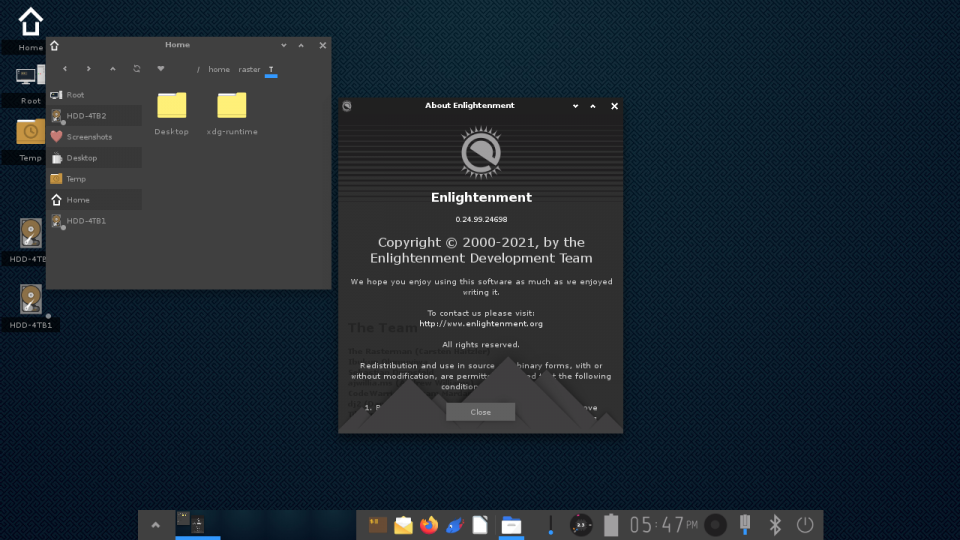 When I enter bullshit data, then get asked to repeat it to prove my identity...

When I enter bullshit data, then get asked to repeat it to prove my identity...

This week in KDE: most of GNOME shell in the Overview effect

This week in KDE: most of GNOME shell in the Overview effect

Minetest game with a strong survival focus, meaning lots of the steps towards building your dream palace are much more tedious. …

Minimal Support for Activities in Wayland

Glad to see work happening on this. 🎉…

Minimal Support for Activities in Wayland

Google’s FLoC Is a Terrible Idea

Google’s FLoC Is a Terrible Idea

Can any of the ciphers in GnuPG be brute-forced?

I was expecting the usual “It’s gonna take millions of years”, but I like this answer better. :D…

Can any of the ciphers in GnuPG be brute-forced?

Sparky – Worth It Then (feat. Lonnie)

Sparky – Worth It Then (feat. Lonnie)

In the new Android Firefox (Fenix), you can cycle between tabs by swiping horizontally over the URL bar. So, it behaves similar to Ctrl+Tab and Ctrl+Shift+Tab on the desktop. …

Screenshot is from this game: https://www.chiark.greenend.org.uk/~sgtatham/puzzles/js/slant.html …

The proper way of putting that

The proper way of putting that