the only real arguments given for not socializing healthcare are;

Or, in reality, they don’t have an argument.

If the US were to socialize healthcare, both parts of the one-party-state would have to completely shift on the issue, because neither of the parts want it. One part, the democrats, use it as a left hook jab to get the soft-left to support them, but understand that they’ll lose money from doing it, and so never will. The other part, the republicans, outright oppose it. But actually trying to initiate socializing healthcare gets opposed by both on the same grounds. “it’s socialism”, “but we have to fund our wars”, “we can’t find the money in the budget for it!!”.

They don’t explain it, and they know their supporters won’t ask for an explanation.

edit because I should have written more on this; The right-wing of the American party doesn’t believe Europe and other countries with socialized healthcare can afford it. They go on tirades to “prove” their point, but don’t really say anything other than “it costs the government money”. And the left-wing of the American party skirt the issue, either never giving an explanation, or muddying the waters on the discussion by bringing up the budget. Both sides agree on one thing, tho, it’s “too expensive”.

But under it all, we don’t and won’t have healthcare because our government is owned by corporations and greedy politicians, and they make far more money if we suffer.

The US system could easily open up to third parties, it already has all the frameworks to do so, but none of the incentive. As stated, our government is owned by the bourgeois class, and they manipulate the system to always be in their favour. But the issue isn’t the amount of parties in our system, nor the politics of those parties. The issue is the dictatorship of the bourgeoisie, and our bourgeois are the worst of’em.

No way in hell is the US ever going to stack up to a European country, simply because our ruling class would never dream of it. They’d much rather ignore demands and put down revolutions, than ever fathom the thought of making a few million less a year from socializing vital industries. Our only realistic option to end this and get progressive reforms is to completely rebuild the system from the ground up as a DotP, we simply don’t have the option of using ‘democratic’ reforms.

Of course, there’s always the possibility that politicians will just kinda give us progressive reforms to forcibly quell revolutionary spirit. But the odds of it are… well… very low.

“passive suffrage”, as in voting power? Sorry, don’t wanna come down on you on that, translating between German and English can be a bit inexact and I wanna be sure I understand what you’re trying to say.

We’ve tried voting for reforms, this has been the main effort of the soft-left for generations, and nothing ever comes of it. Why? to put it simply, the American political system is a ‘democracy’ in name only, in reality, the bourgeois class own everything and only they get a real say on governance. This is the entire truth, and it’s very frustrating trying to convince people to understand this.

But, why is that hard to get people to understand? and why do Americans seem to be content with trusting the bourgeois class? well, the straight forwards answer is; we’re propagandized into believing the system works, and into worshipping wealth. We’re taught young that wealth directly equates to value, and so we don’t question or get upset when we see the rich blatantly ignore the democratic method. And, people are too blinded by indoctrination to realize they’re only supporting the bourgeois class - even if they dislike them - by saying the democratic method will solve the issues they cause. People are starting to realize the rich don’t care about them, they’re starting to realize the democrats aren’t on their side, but still believe voting does anything.

TLDR: we live in a very corrupt system, and most Americans are thoughtless drones who don’t question their political situation.

The ones who don’t just die. 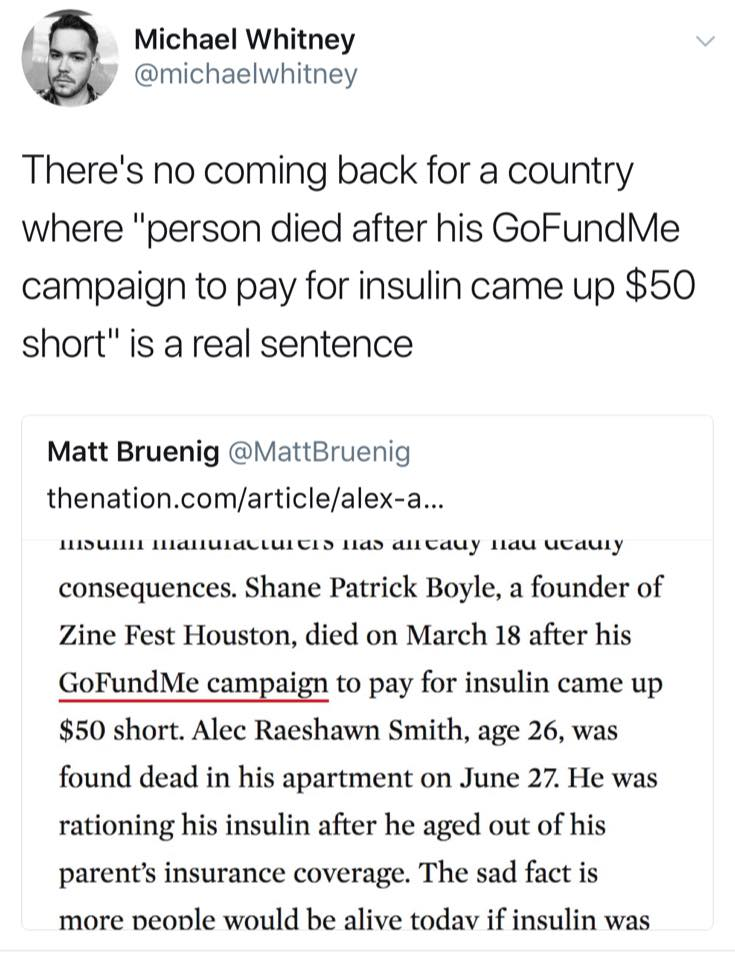