Is Steam Deck Linux (the new Arch based Steam OS) a distro I can download now? I just tried ChimeraOS (Formerly GamerOS) and it’s pretty neat.

NPR isn’t state controlled per se, but they probably report whatever the state department tells them all the same.

So just some added support for hosting linux instances on Azure.

I think Local Storage isn’t meant to be read server side, but that’s an easy line to cross if you’re determined.

I’m not alarmed, but I am completely uninterested. I don’t think whatever they offer will be of better value than just playing the games in an emulator, but I’d like to be wrong.

I believe that it is long-past time for the US to implement a proper national ID for all citizens: currently, we use Social Security numbers & cards in place of a proper ID, but Social Security numbers / cards are notoriously insecure. In fact, older Social Security cards used to print “NOT FOR IDENTIFICATION” on the bottom because they are so insecure, but most people used them anyway so they took that off to avoid confusion. According to this US Dept. of Justice report in 2012 and 2014 identity theft affected about 7% of the entire adult population of the United States, the insecurity of Social Security numbers is the leading factor. I expect the annual rate of identity theft in the US is still about 7% per year, it is a major issue. In contrast, I could not find another country that suffers to the same degree as the United States from identity theft, but in Europe (where most countries issue national IDs) identity theft appears to affect far fewer citizens (less than 0.01% per year, but I could not find a study to support that number).

Yes! I know there is some objection to national ID here in the US, but we already use SS as a national ID (and an authentication secret!) when it’s woefully insufficient. The way we use our SS numbers is embarrassing and extremely harmful, but the situation is left to get worse just like our infrastructure because our government is systematically incapable of doing anything besides moving the margins on services and protections here and there.

I can’t think of any restrictions on encryption per se in the US other than the weird rules around exports and rules against breaking encryption for the purposes of bypassing DRM. I can encrypt whatever I want without permission: filesystems, communication channels, you name it. A judge can compel someone to give up encryption keys, but the encryption itself isn’t criminal or even regulated.

Edit: Or just click the US on that page and read their rationale.

I was wondering if Megi was updating this. It’s been a couple of months since I turned my Pinephone on, this is probably a decent way to see how things are progressing.

Then why did I bother getting it!?

And if we have vaccines that alter our DNA then why can’t I be my fursona?! 😡

I think this is largely accurate. There are unfortunate “witchhunts” where nuance and understanding are totally eschewed in favor of self-righteous mob mentality, but this is nothing new.

I don’t think I’m saying anything particularly novel when I say that the biggest problem with this discourse is that every form of consequence for ones actions is labelled “cancel culture” by bad faith actors. I was caught doping up my racehorse and now my victory is considered illegitimate? Cancel culture. A large number of people on Twitter don’t like something I, a very wealthy public figure, did? Cancel culture.

But there IS a vindictive, bloodthirsty streak out there that I think is maladaptive at best. I don’t think anyone should be fired or destroyed for something stupid they said a decade ago, for instance, and I think real evidence for past wrongdoings needs to be evaluated before a mass shunning or divestment happens. When a motivated group of people all complain at once though, employers/orgs get scared and capitulate.

(I’m broadly talking about the liberals and left here mostly, but only because I’m much less familiar with whatever “self-policing” goes on on the right.)

I’m not sure what Obama brings to this discussion, but uh… Thanks, Obama.

Using Google and Facebook as oauth providers doesn’t mean sharing anything important with Google or Facebook other than “This user requested authentication for this client (Alovoa).” I wouldn’t use it personally because I minimize my use of these companies as much as possible, but it’s probably fine by most people’s standards in addition to being convenient. Especially since they presumably already have and use their google/facebook accounts.

I did nothing beyond running the docker image.

I’ve used Nextcloud Talk a few times and it’s great. You send a link to the intended participants and it just works.

link
Bilb!toLinux•Help, my system is read only
link
1•2M

Don’t SSDs sometimes become read only when the filesystem is corrupted or the SSD is old? The second one might be a myth, I was never sure.

I did think the sudden massive adoption of Zoom was very strange. Like you said I had never heard of it before the onset of the pandemic. It seemed to grab a critical mass of attention right when people were looking for a reliable cross platform solution.

I remember when Apple was introducing Facetime they promised that it would work across different platforms, but then it never happened. If they had gone through with that promise it very well could have been where Zoom is right now.

I just looked around to see if they have any plans around this and funnily enough this was just posted hours ago: https://www.cnet.com/news/facetime-on-android-apple-announces-major-upgrades-at-wwdc/

In general I like the proton UI, but I really wish they hadn’t removed the compact layout option.

You can enable it in about:config (for now). It then becomes available and it works, but with language indicating that it isn’t supported. 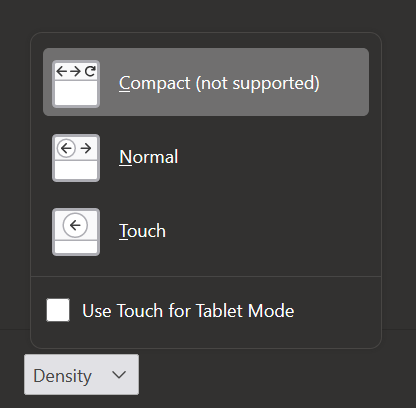 link
Bilb!toLate Stage Capitalism@lemmygrad.ml•Amazon has a quota for the number of employees it would be happy to see leave each year. Employees say that's a big reason Amazon's culture feels cutthroat.
link
1•2M

Oh wow, I’ll apply for the position of being fired later as long as they don’t mind me “moonlighting” at my current job and doing absolutely nothing for them but collect a paycheck .