Background These are just some notes related to my observation that: On Fediverse Ad-hoc Interoperability dominates and hampers innovation. Need to clarify some terminology that I frequently use relating to Social Coding #Foundations … “Any decentralized [ecosystem] requires a centralized substrate, and the more decentralized the approach is the more important it is that you can count on the underlying system.” — Byrne Hobart. The Promise and Paradox of Decentralization Glossary ter...

On the new Discuss Social Coding (that has not officially launched yet) I posted some notes on a particular challenge the fedi imho faces, that hampers adoption and poses growing risks in the future if not dealt with appropriately.

The notes leave a lot of things I’ve been looking deeper into unmentioned, but you may find them interesting nonetheless.

Why another non-federated forum on coding.social?

Why not Lemmy instead? 😅

Yes, I get that question more often. It is because a link aggregator is still much different than a forum. Discourse comes with a host of features that aren’t or are not yet part of Lemmy. Other than that I agree with idea that it’d be way better if federated tools were used. In last funding round at NGI Zero (NLnet) https://pavilion.io was not selected, but they’ll go for the next funding round, and their plan is to bring Discourse to the Fediverse.

My criticism on Fediverse as a whole is that the technology is currently visionless.

Completely disagree. There are many of us who have been working on this for a decade plus who share a solid vision. We just don’t have capital. I think you mean to say the software that becomes popular is for some reason the most visionless of all the software being worked on. Perhaps figure out why that is first… (Lacking capital is the pretty obvious answer IMHO)

There’s fantastic work done by many fantastic people. And with tremendous effort open standards have been created. Tons of work on a whole bunch of apps. Sure, there could be more capital, that would certainly ‘oil the gears’ and speed up evolution. But funding is a general problem with free software. I am curious for your description of the vision.

I’d argue that the necessary open standards have existed for quite a long time, RDF and SPARQL among the oft-forgotten.

As for a description of the vision it would take me quite some time to put it all together. I don’t have time because I’m impoverished. My main areas of interest have been small businesses, interaction with their customers, and healthcare, the interaction between doctors and patients and caregivers and guardians (including human guardians of nonhumans for veterinary care). These became my priority simply for humanist pragmatic reasons. If we didn’t live in such a dystopia perhaps my focus would be on creative collaboration, the interaction between creatives and fans, and scientific exploration, including of course crowd sourcing and amateur science.

But in all my research I’m aware of many other use cases.

Well, it is not needed. There’s some things in your response where I can follow up on to demonstrate how I meant the issue I have re:fedi-vision. Mind you, I am passionate about all these technologies, and have spent countless hours advocating their broader use. By creating this community for instance, or moderating SocialHub, maintain fediverse watchlists/delightful lists, and also by creating plenty of issues in project trackers proposing fedi support.

On RDF… I was deep into XML standards at the time it was drafted as a spec, and I was thoroughly excited about the vision of the Semantic Web at the start of the hype. Very sad when it was clear that it failed. RDF et al have their uses, but after many years still not as widespread as originally imagined. I have never seen a single app, where I would say to others “Yes, of course this is a gorgeous delicious piece of work. It is a Linked Data app, after all”. Most good linked data apps I’ve seen were made - and only to be understood - by the academic world. I am sure there are good ones. Likely in specialistic domains. And I’m aware about some widescale application of linked data, like Google Knowledge Graph / schema.org mostly for SEO, Wikidata, etc.

But there hasn’t been mass adoption of Linked Data, and historic experiences have created salted ground in the dev community. On fediverse most devs don’t care much about JSON-LD, just append that @context prop or advocate for going plain JSON altogether. Besides the academic / specialist world, the locus of attention re:linked-data was in the Solid Project, not surprisingly led by Tim Berners-Lee. And there’s some other interesting standards development, like around Verified Credentials with a host of specs (Digital Bazaar, Manu Sporny being influental here). Now in the Solid community I spend a lot of time discussing the very weird, very unclear positioning of the project in the past. And recently their website has improved quite a bit as to what the project is about. But I still get the feeling that in the background there’s a motivation of ‘re-inventing the semantic web’.

To end on RDF / Linked Data itself there was recent discussion Is RDF “hard”? that I also brought to SocialHub as Linked Data: Undersold, Overpromised? that are interesting reads in this regard, I think.

Vision of the Fediverse?

What I meant to say with “My criticism on Fediverse as a whole is that the technology is currently visionless.” is that there is no common outlook on what the fediverse technology is to be used for, capable of, and what its full potential entails. There’s no shared common vision that quickly communicates to someone who never heard of it befofe, that makes them jump with excitement and say “Aha, now that’s fascinating. I am going to jump on this technology as I shouldn’t miss the boat”.

And not only that, because that’s just the technical aspect. More importantly there’s only quite technical-sounding storytelling around the fediverse. If you tell some non-technical person “You should come to the Fediverse” and they say “Why? What is that?” then likely the answer will include ‘federation’, ‘decentralization’, ‘instances’, ‘moderation’. And you can make cases why fediverse is better than traditional social media platforms. All valid reasons to migrate… if you would care about these things.

Back to the developer. The developer base of the fediverse after many years is absolutely tiny. Not thousands, not hundreds, but ~150 active developers. And when a new app announces fediverse support, this mostly means they are now capable of sending a message that pops up as a toot in a Mastodon client, or showing a timeline of toots from remote instances. Somewhere along the lines the imagination of what federation support means, has become limited.

Vision (technical). What is the breadth and scope of what I can achieve on the fediverse as a developer? How will the ecosystem we thus create look like in 5 years? How will all these different development initiatives integrate and intertwine? What crazy potential does this unleash? How will it change the web as a whole?

Vision (social). What can I do on this new social space? How does it change interaction I can have with others online? In what way is this different and unique in comparison to traditional social media I already use? How is it more social? How will this impact my life?

There are very few fedizens that I see pondering these questions, exploring and advocating the boundaries of what’s possible with the technology. Most people take fediverse as-is and effectively say “Come to us, this is great”. The devs that venture in federated apps find it difficult to onboard themselves, they need to overcome significant hurdles before they can count themselves among the elite group of ‘fediverse experts’. The average developer - as Microsoft characterizes them as “the 99% developers” - will likely not persevere and reach this stage. They either stick to contributing to an already established popular app, or they just move on to the next project.

I leave conclusion to the reader of this rather long explanation. This is how I look upon the current situation, with a lot of advocacy experience under my belt. I see many people thinking that fediverse is a “done deal”, that the tech and ecosystem will only grow and flourish from now on. I am not so sure about that. Most importantly I don’t see strength in the ecosystem and ‘substrate formation’. This makes me fear that fedi will only manage to become interesting… to be exploited by the powers that be (i.e. corporate takeover, similar to the regular web).

At least in your reply I am happy to see that you were thinking of the fields where federation can be applied. Those are use cases, not vision, but it is a ramp up to imagining what an attractive shared vision could look like.

Lastly I want to mention something about Metaverse. Now, I personally find this a rather uninspiring, bloodless concept coming from Facebook and all. The name itself is a bit ‘void of humanity’ and dystopic (very fitting for FB). But what it has going for it is that most devs have an idea of what VR/AR virtual worlds would look like, have gaming experience that show how far you can take your imagination and creativity in such worlds, and hence that is an enormous boost for this future direction. And of course it helps that corporate world pumps big $$$ in PR and marketing into it, is ready to pounce.

We need something similar for fedi. That’s all.

Out of sheer curiosity and in hopes of some nice responses I sent a toot, asking: 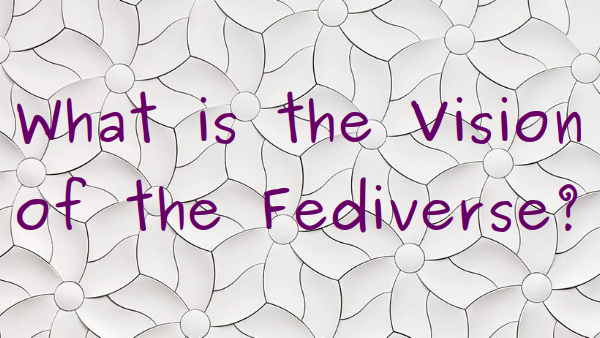 I posted a follow-up to it, as I got some very nice responses from various fedizens. Quoting below:

Thanks to all of ya who responded to my question thus far on:

“What is the #Vision of the #Fediverse?”

Some interesting takes, and also the observation that its personal and there are many visions.

The observation “there is no singular vision” by @skipfordj is a valid one.

So why did I write this toot in the first place?

My observation is one where the #Fediverse technology adoption lifecycle is broken due to the lack of healthy substrate - people and processes to evolve the ecosystem as a whole, maintain open standards, ensure broad #interoperability.

That’s technical vision related. It hampers innovation and the imagination of what fedi can be.

It leads to risks for fedi as a whole. That fedi stalls, or will be exploited.

This is a companion to Fediverse Futures on Social Coding to elaborate the Fediverse from high-level, non-technical perspectives, brainstorming our visions and dreams.