CoderGlue: Let’s Code Together 😉 This topic was inspired by FedeProxy project, and my interactions on their forum. There’s a wink in the title, because “CoderGlue” name and icon design is just a proposal I made, as alternative more descriptive project name. Nothing more than that. Culture and process I really like how the team is setting up the FedeProxy project organisation. A thorough approach, deep thought, and proper preparation. So too on diversity: @anon20068248: Diversity: F...

This SocialHub topic was inspired by Forgefriends (then called FedeProxy) and constitutes a wild brainstorm for envisioning what could be an entirely new paradigm to softwrare development: United Software Development.

Exploration of the idea involves looking from a non-technical perspective at all the possible ways in which Decentralization and fediverse standards (ActivityStreams, ActivityPub, Linked Data) can be leveraged to shape this paradigm.

Preliminary definition of United Sotware Development is “Free, libre software development, processes and culture united,. Sustainable, open and accessible to anyone.”, but I’m sure that can be further improved.

@dachary@lemmy.ml offers a very enticing look into what “Federated Development” might entail. I highly encourage people to read the SocialHub thread, and am very curious about your musings and thoughts.

Why not look at how free software is currently developed, to define what a United Software Development paradigm might look like?

The traditional free software development process can be divided into three parts:

This process has several problems first amongst which is the reliance on the individual, that started this whole project. In order to reach step 3, at which point the project could maybe survive without them, this individual has to be able to develop the project, document the project, provide Q&A, collaborate with other developers, provide potential up front costs (server costs, etc.). And all that without earning a penny for their work in most cases.

And after step 3, this individual might not be quite as relevant to the project as it used to be, but it is often still vested with an enormous burden and authority over a project (the title “Benevolent Dictator for Life” describes this situation quite well).

Thereby it is no wonder, that free software is struggling: It’s development has to overcome extreme burdens, that have nothing to do with the quality of the project and it’s idea, before reaching adoption and a developer community.

This makes starting a new free software project extremely unattractive for developers committed to free software. And those that do decide to start a new project often waste their energy, time and other resources developing projects, that fail at one of the hurdles described above. Making their efforts futile.

Thus I understand the United Software Development paradigm as an answer to this current situation, creating a path for developers to create new free software that is successful based on the merits of the project and not the ability of it’s founder.

It has to begin before that and give people the ability to find a group, an idea, and a basic organization together and to create a software from the beginning as a team effort and gain team members along the way.

The modern forges have become centers for open source software, but they do not provide developers with a way to connect, find like minded people, ideas and develop projects from these ideas as a team, because forges today (especially GitHub) are suited to the needs of big tech companies benefiting from the voluntary work done by open source developers.

Free software can only survive if free software developers can develop their own projects in a cost efficient manner and without being a Swiss army knife of a developer / designer / Q&A / security researcher / devops.

Yess!! A super follow-up to this brainstorm idea 💚

I’ve been interacting with Fedeproxy community, which is now called Forgefriends and came up with the idea of “Social Coding” which encompasses the entire process from earliest idea to mature and healthy software + communities. And ideally this process involves a broad range of people with all kinds of backgrounds and experiences, and lowering the barriers for them to participate as much as possible, and in any way they want and feel comfortable to while ‘onboarding’ them further.

Gitea is the first code forge that embraced the idea of forge federation and becoming part of the Fediverse. First steps have been made and this will progress next year. Hopefully with funding from NLnet via a NGI0 grant they applied for.

So in fact, they’ve become a true “forge friend”. What we are hoping to achieve is to have Gitea team realize the absolutely “unique selling point” (USP) nature that offering federation support entails. It goes way beyond a mere technical capability that is added, and towards a vision on what “Social Coding” really means.

I agree fully with your take on this, and from your text there are countless points where Fediverse could facilitate these social processes in various different ways. It is very exciting. On fedi various apps are maturing Groups support now (including Lemmy) and a step further is solid Community support and facilitating Community Governance. That comes a long way into the direction of having FOSS initiatives be native citizens on the Fediverse that any fedizen can hop onto very easily.

And federated forges are just one part of this story. There’s more and more FOSS hosting providers that supply infra and bundled services. And there are people interested in organizing dev circles that hop from project to project to program on it. For example @csddumi explaining in this toot:

“I’m trying such a new way of organizing #developers by gathering a group of young programmers, who work together on a project of our choice, instead of each of us working on our own projects.”

Exploring the possibilities further is really uplifting exercise. This all goes beyond Microblogging into the thus far untapped potential of the Fediverse to enter new domains.

Update: I was quoting your own toot @csdummi@lemmy.ml without noticing you were the author here as well. Also added that to the fedi thread 🤣

My post is incomplete though: I’ve defined problem that the united software development paradigm should set out to solve, but I didn’t provide much information as to how that problem might be solved.

For that I suggest a new definition of the free software development process:

At no point during this new process does the success of the project depend on an individual. Indeed each step of this process could theoretically be done by a different person or persons. Thus requiring a whole new definition of what a maintainer is, how they become one and forge software has to change accordingly.

And there should be software to support the first three steps of this process especially, software where you could publish ideas (1), make them concrete (2) and find developers to work on a project together (3). Federating this software and embedding it in Gitea or another federated forge would probably be the best approach.

Since Big tech cannot use this process really, since it includes giving away your ideas and not just your code to the commons.

Wholly on board again for this idea. Holistically addressing the whole process, including ideation and forming of the community that starts to tackle a particular idea. It need not even come off the ground into a streamlined project altogether. If a groups starts working on an idea, then leaves it by lack of interest or something, they will still have forwarded it and it is just waiting for the next person or group to add something to it. The whole idea of “dead projects” because the maintainer throws the towel in the ring can become smaller.

Maybe a little mental prototyping is in order:

A project based on the fediverse may be created, that:

(Whenever I say Object, I mean an ActivityPub object)

Developers should be able to join and leave a project at any time. And if they are a maintainer, the group should just be able to chose another developer from amongst their members.

It may be easier to split this into two domains that can evolve separately: Ideation and Project Management.

Just some additional points to the ones you mentioned (obviously it should start minimal, but just brainstorming right now). Going further it may be an idea to diagram these domains, as that’s a good way to slash details and focus on essential process.

When a project is created the Ideation still continues. The ideation process goes in parallel.

PS. Something along similar lines is the open-source-ideas GH repo.

PS. I’ve witnessed some nasty examples of a maintainer disappearing and not even willing to update the README to point to the newly active fork where stuff continues.

PS2. There may also be a 3-domain split, where you have Community Governance and Project Management separately.

Those are great ideas. I’ll try to minimize these into minimum viable product requirements based on the three domain split:

A service which allows the sharing, discussion and concretize ideas.

A service closely working together with the Ideation and project management service.

A forge that hosts the repositories of a project and allows for the Community to change the access levels of developers (Maintainers, Contributors, etc.).

I decided for this three division, because Project Management can be seen as a Forge with some additional features (maybe implemented with just a plugin or bot) and the focus of development should lie on Community Governance and Ideation, the new and unique services.

I only include those requirements here, which I think can be reasonably implemented in a first release and nothing more.

Wonderful! Just going to add some remarks / thoughts… we might call this the “Social Coding MVP” and when spinning up an app, it is a “social coding platform”.

For a minimal Community vocabulary extension that facilitates having arbitrary ‘Roles’ I suggested modeling them as follows: 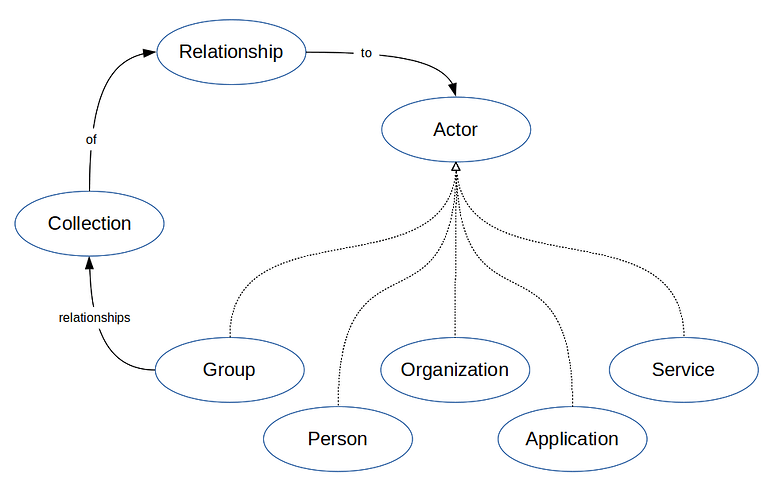 I think this discussion is outgrowing it’s frame. (Something we need to strictly avoid in a federated Idea, Community and Project Hub.)

I propose moving this into a Repository or Organization on a forge.

Agree. As per your toot, Codeberg it shall be at:

This is a companion to Fediverse Futures on Social Coding to elaborate the Fediverse from high-level, non-technical perspectives, brainstorming our visions and dreams.