Hi, I run GamingOnLinux.com. Happy to be part of a more open place to share and chat with you all.

Wildflower: From the Embers is a story-driven RPG about a young witch in a new town

Wildflower: From the Embers is a story-driven RPG about a young witch in a new town

Brawlhalla to get Easy Anti-Cheat, dev puts up Beta with EAC working on Linux with Proton

Brawlhalla to get Easy Anti-Cheat, dev puts up Beta with EAC working on Linux with Proton

DXVK 1.9.2 goes out with improvements to CPU overhead for D3D9

DXVK 1.9.2 goes out with improvements to CPU overhead for D3D9

NVIDIA 470.74 for Linux is out fixing up memory usage for Direct3D 12 with VKD3D-Proton

NVIDIA 470.74 for Linux is out fixing up memory usage for Direct3D 12 with VKD3D-Proton

It took you 4 months to even notice I was here, wow. What I said stands, you’re a terrible power-hungry mod with an attitude problem and should not have any power here on Lemmy.

The Valve Steam Deck, lots of excitement and plenty to think about for Linux gaming

The Valve Steam Deck, lots of excitement and plenty to think about for Linux gaming

XWayland 21.1.2 is out now with support for hardware accelerated NVIDIA on the 470 driver

XWayland 21.1.2 is out now with support for hardware accelerated NVIDIA on the 470 driver

Return a wasteland to green glory in the upcoming Terra Nil

Return a wasteland to green glory in the upcoming Terra Nil

OpenMW 0.47.0 for Morrowind is coming with a Release Candidate available

OpenMW 0.47.0 for Morrowind is coming with a Release Candidate available

The fantastic Linux gaming overlay MangoHud has a new version out

The fantastic Linux gaming overlay MangoHud has a new version out

NVIDIA driver 470 for Linux to include support for async reprojection

NVIDIA driver 470 for Linux to include support for async reprojection

Not sure what you’re trying to say here? Phoronix covers a lot of stuff no one else does and it’s where I read it?

It Turns Out Windows Unconditionally Reserves The First 1MB Of RAM, Linux Was Just Late To Do So

It Turns Out Windows Unconditionally Reserves The First 1MB Of RAM, Linux Was Just Late To Do So

The open source original Soldat is looking for a new maintainer

The open source original Soldat is looking for a new maintainer

Well, it doesn’t have to exactly match though right?

Ack, that’s a shame. Hmm, what about a linked/parked domain (I forget the term) that simply points to lemmy.ml.

That’s interesting, a little unwieldy though. Buying a new domain would probably be better in the long run to give you more control too. 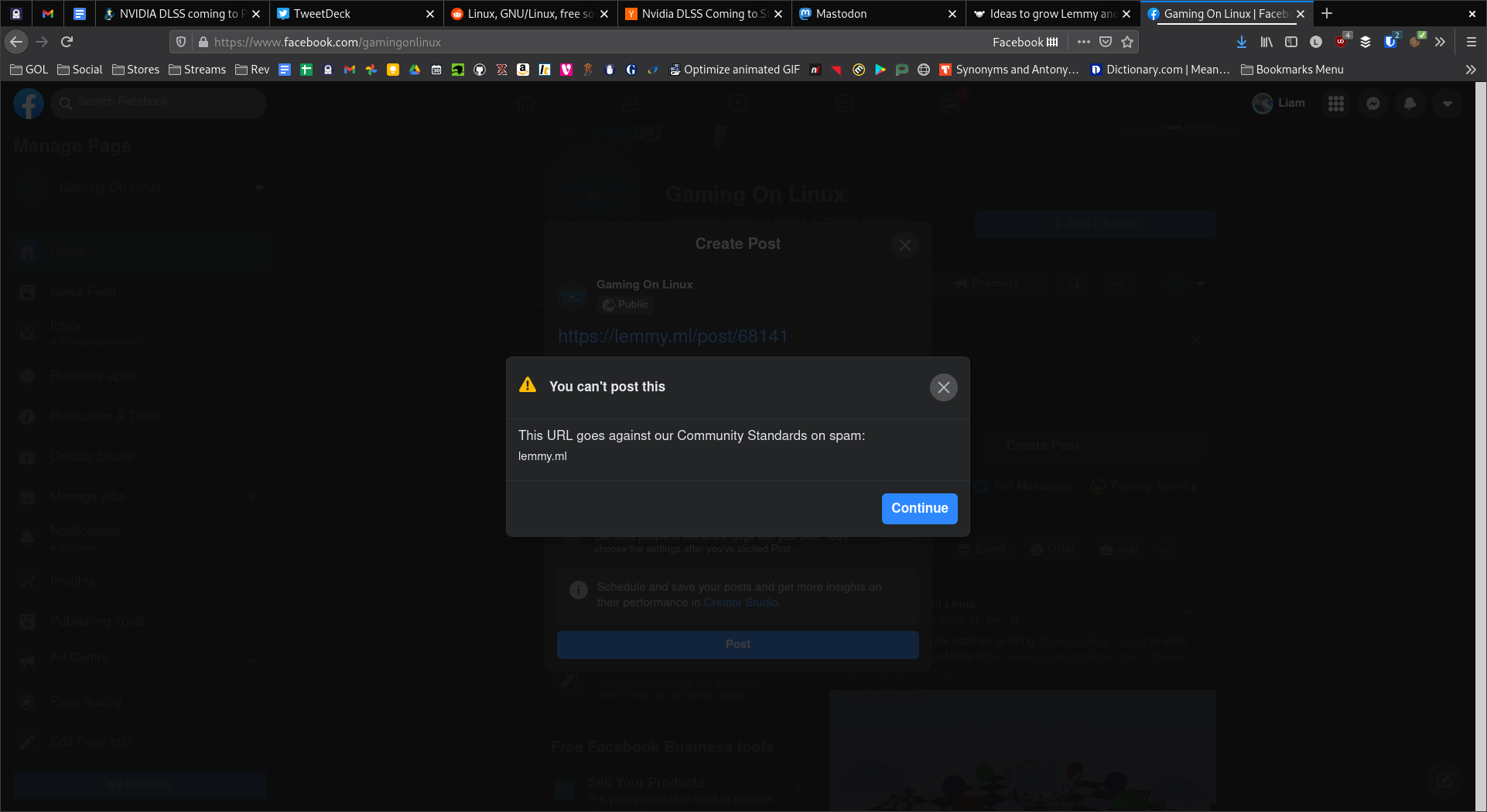 That’s a nice way to think but not the reality with a site such as this, especially when some places (like Facebook) ban sharing Lemmy links.

Take a closer look at what it does ;)

Ideas to grow Lemmy and this community?

Hi all, since I imagine a lot of you are here for the same reasons I am (a dislike of Reddit, prefer open source) how about some thoughts on how we can pull more users over to Lemmy and this linux_gaming community? I've been advertising it where I can but I can only do so much myself in between running [GOL](https://www.gamingonlinux.com/) directly. There's also an announcement bar on GOL that mentions Lemmy on rotation (it's random on refreshes) at the top :) and I Tweet/Mastodon post about it at times too. What can we do? Any interesting ideas? We didn't manage to break 1K by the end of May, so let's go for the end of June for 1K subs to linux_gaming!
23
message-square

Ideas to grow Lemmy and this community?

@sirsquidtoAnnouncements•Apologies for Lemmy being down last night.
link
fedilink
1•2Y

Nice to know a report feature is being worked on. Will this be something were many reports cause something to be hidden until an admin/mod can look at it? Might be a good idea.

Sounds like you need a better host too. Who are you with right now?

They do have plans for Firefox but currently it doesn’t have what they need actually in the browser.

Thanks for sharing my video :)

That’s nice, would be a good default really to have less focus on points and more on interesting posts and discussions.

Good, I hate the points systems and it really does lead to people being terrible on the likes of Reddit. Internet points makes some people go mad with power.

I have extreme doubts it would be NVIDIA. Just don’t see it happening. They have no real reason to open it up, as nice as it would be.

PulseEffects is an interesting project but I think each has their own use and audience. For NoiseTorch, it does one thing and does it well, rather than overload people with options.

You tried to get the full-time Project Manager of Godot Engine banned from their own subreddit, because they had the audacity to very politely talk to you about the ban on me from /r/linux. You’re fucking power mad. You should not be listened to, ever.

Admins, if you listen to CAP, you will ruin Lemmy.

The name alone is such a ridiculous scream for attention it’s absurd.

Well, by definition of “blogspam” that would basically ban me and GamingOnLinux.

Frankly, I really think it’s a gross term that often discriminates against websites doing good work, and I’m not even talking about myself here. The /r/linux community on Reddit is notorious for this, banning multiple sites giving out good news and I see CAP_NAME is here as a moderator of the Linux community - sad to see this. CAP is a power-hungry tool who claims harassment whenever people don’t agree with his way of thinking.

The problem should not be banning “blogspam”, the issue should be looking at what the sites and the people running/posting them actually bring to Lemmy. Think about the posts themselves. Do they generate discussion? Get regular upvotes? Do the majority enjoy the content. Lemmy itself is small, being hostile to people that might actually help bring traffic is not going to do it any favours right now. I’ve been constantly advertising Lemmy to multiple thousands of people through GOL social accounts, and our website.

Are the people/websites posting about something other people aren’t? Often yes. Are those news websites the initial source most people get the info from? Usually also yes. People love to claim otherwise (hello CAP_NAME), but the majority do not follow hundreds of mailing lists and RSS feeds to source the info like the news sites do.

Honestly, If the route we go down here is to start shouting “blogspam” and turn into another Reddit with far less people but the same hostile rules, then I’m out and I won’t look back.

I love the idea of Lemmy, so please think on all this very carefully.

As in free of price, not specifically free and open source games.

Nice! Just need those NVIDIA drivers with support for XWayland to hurry up :D

Well, I’m not advocating for them to become the OSI but the problem is the FSF just doesn’t seem to be advancing anything in recent years. That’s my point about them needing to modernise and bringing back RMS isn’t helping that at all.

As for the idiotic comment, I still think it is. You don’t advocate for something, by going around being a pest to other projects. You talk nicely, educate and try to bring them around to your way of thinking, being obnoxious only brings on ridicule like it has.

Happy to discuss and the podcast is just personal thoughts. However, as you said yourself, they’re not really relevant any more. Bringing back RMS onto the board only makes it even worse, because it clearly pushed away a lot of people. The people that help the FSF become irrelevant are the RMS zealots, otherwise, why would the FSF be fading away year after year? It’s not working.

It needs to modernise and yes, appeal to corps too - like it or not because they have the power.

Look at what the FSF did during this, they put Ian Kelling on the board just showing how they don’t know what they’re doing. Kelling was instantly called out for idiotic behaviour.

Not sure where you’re looking but it reviewed very well overall. Very Positive on Steam and over 80 on Meta Critic. It was a big hit.

The combat in Valheim is quite hard, far more interesting than Minecraft could ever be. Combat is a big part of Valheim and is “souls-like”. It’s challenging for sure and will certainly keep you busy.

I burned out long ago on Minecraft but love Valheim.

Most of my time in it is alone, so yes!

Oh jeez, they still didn’t clear up all the glaring issues with that article. It’s so full of errors.

Anti-cheat is probably still years away though, sadly.

That was not specific to GOG, all stores had the same version which used the eON porting tech from Virtual Programming.

why isn’t GOG larger than it is

Most people end up preferring the convenience and features on Steam. Valve also put a ton more effort into Linux. GOG are lagging behind in many ways, and they don’t support Galaxy on Linux.

I wish to leave it up a while, since I’ve linked to it in many places. Ideally, closing/locking a community would be good.

Looks good to me!