Please don’t put any hate comments against the developers of lemmy or against the person who posted this.

I am also unhappy about what the main lemmy instance is doing.

What are your thoughts?

I’m sorry to see people somewhere on the Internet coming out against Lemmy. First of all, let me say that I sympathize with the China issue. I’m a Muslim and I have been concerned about the Uyghurs for a very long time. This is not some bandwagon that I am jumping on, and I have ties to the region as well. I moderate the Uyghur sub on Reddit, created #uyghur on matrix.org, and on lemmy.ml I have registered communities like c/uyghur and c/xinjiang. I did that mainly to promote the welfare of Uyghurs and guard against whitewashing of the situation in Xinjiang. Obviously I am pro-Uyghur, and I feel that the admins of lemmy.ml have been gracious enough to respect me as a user and a mod. I have also not seen them engage in censorship of opposing viewpoints on this issue, and we have at least once that I can remember disagreed on China’s Uyghur policy here on the site. This did not result in any problem.

Please don’t cancel Lemmy, because the software is amazing and the creators really are nice. I don’t have to agree with them on politics in China. As long as they’re not crazy about it, the situation is manageable. So far they’ve always been fair.

Even suppose that one day they implement a policy on lemmy.ml that says they won’t allow anyone to post pro-Uyghur things. So what? It’s their Lemmy instance, they can decide what’s on it. I can go start my own instance. I really don’t think lemmy.ml has any obligation to do what the community wants. They’ve already done enough by creating the software and making it FOSS.

Besides, you know how many people posted pro-Uyghur content on c/uyghur since I created it? None. So if you’re concerned about how the issue is being represented on this site, maybe you could come post something sometime, or argue in the comments.

Anyway, at present I’m not recommending any other Reddit alternative and probably won’t.

This kind of drama happens on Mastodon all the time, and within a few days everyone forgets about it. Apparently thats just how the platform works, so no need to get worried.

I suspect it’s by design. It’s surprisingly hard to discover past conversations on Mastodon, and the single depth comment/reply system makes it a pain to actually follow a serious discussion between multiple people.

I’m 100% sure you’re right… I don’t know why but the twitter style seems like someone’s yelling into the void, trying to start arguments, while the tree format feels like you can have principled discussions and learn from each other.

Exactly. The fact that most of the community here leans “tankier” is not the same thing as censorship. Plenty of people disagree on the main Lemmy instance and simple disagreements hardly ever result in things like bans.

I am among those people who think stalin wasn’t a hero, mao a genocide, and modern russia and china are oligarchies and dictatorships.

Some community members might disagree with me, but so far it’s been in a respectful way.

An open society must tolerate the later. I.e. we must tolerate that people dispute that human right abuses occur or occurred. This is because you cannot judge someone purely due to getting the facts wrong or not knowing them.

If we wouldn’t allow this, we would de-facto argue for a totalitarian state, since we wouldn’t allow people disputing facts (which can be proven or disproven). We would have to nominate some entity that judges what is fact and what isn’t, which is the opposite to gathering evidence and engaging in an open, society wide discussion.

To be clear: Allowing discussions around whether abuses occur is notably different to letting people get away with advocating for abuses. The latter is what needs strong responses. The former is what requires engagement.

I don’t see anything on lemmy or in the mastodon thread that shows that human rights abuses are advocated for. What I do see is that there are some fractions that show sympathies to China which you would otherwise only see for the USA. I think its useful to compare these sympathies because they seem to express themselves in similar ways.

With all that said, I think the opinion expressed in the mastodon thread is not particularly useful. It, in many ways, minimises real human rights abuses that occur world wide, day to day, in China, USA, and many other countries in East and West.

Let’s call out the abuses, let’s discuss and present the evidence for them, let’s not alienate people and create polarity that looks like us-vs-them.

Very well said. Also, if these people disagree with the rules on lemmy.ml, they could create their own instance, with their own rules. Thats the whole point of federation.

Us: “China isn’t committing the atrocities the West accuses them of and here’s evidence.”

Anti-China people: “OMG you actively advocate for China’s atrocities and want them to keep happening!”

We politely asked this fedi account to take this discussion here, but they obstinately refused. They’ve equated even any discussion questioning the Zenz / Byler / ASPI narrative as genocide denial. 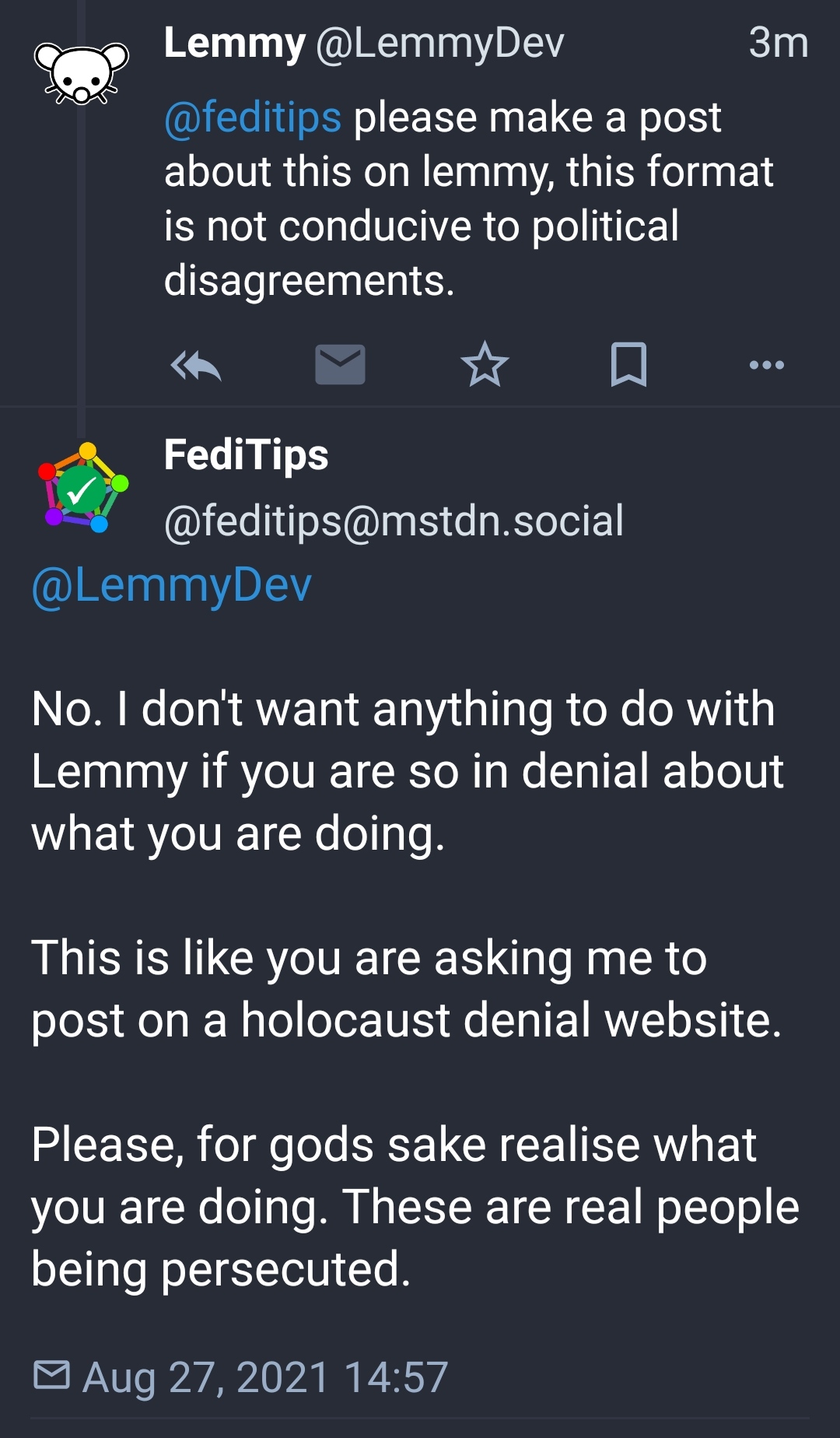 Block 'em and move on I say. It’s clear there’s no reasoning with them and there isn’t much we can do to stop them from spewing propaganda at us. In fact, engaging them will probably only exacerbate things.

The main difference is, that one practice gaslighting as a means to justify such acts.
They will claim “it was just joking”, or explain how in fact the abuse is something good, hence they aren’t for human right violation because they are for something that they just defined as something good.

I haven’t seen this. What I’ve seen is that people say that the abuses do not occur.

show instances of lemmy.ml users saying “I was joking” or “saying that abuse is a good thing” during a discussion about any alleged genocide, abuse or disater.