Hi rodents,
since two weeks at max I started seeing new people posting on international communities (aka communities not strictly linked to a language or nation) in other languages than english.

While I’m ok with seeing multiple languages in the main page, I personally think it’s not so ok to post not in english in communities like c/asklemmy, c/technology or others.

I’m not expecting to understand anything when snooping in c/espanol or c/hispagatos because they are not international communities, in the sense that they chose to specifically target spanish-speaking people and It’s completely understandable.
It is their choice and that must be respected.
The same could be said if anyone wandered in c/italy and tried to understand the couple of posts in there, without knowing a word of italian.

Still, when I came across the new posts made by a newly subscribed rodent, written in persian (I think that’s the language, another user said it was persian, I’m not sure), I must admit I felt they were out of place because only a handful of people might be able to understand them without a translator.
From what I saw, other people downvoted them, probably for the same reason.

I’m conflicted because on one hand I’m all for niches, foreign cultures, local communities and so on, but on the other hand I’m also in favour of internationalization and since english was chosen for us for quite some years now, I feel in those communities we should try to stick to it, for the sake of understandability.

Am I too strict about this? After all, no rules were put in place to say something about this.
Maybe I just need to shut up and use a translator, I don’t know.

What is your opinion on the matter?

I personally don’t really mind it, if I see something in another language I’ll usually just scroll past it, maybe checking in on the comments to see if anyone’s offering a translation. Maybe in the future there can be some kind of language filter if you really don’t want to see non-english posts for whatever reason

Yeah that’s what I’m doing as of now.
Mostly because even though I am curious about the post and what it could say, I don’t have a tool which translates persian to english, nor italian.
I know there’s google translate, but I try using deepl or other alternatives whenever I can (google can screw itself for so many reasons).

For the filter, nutomic said this in another comment.

To be honest, while the integration might not be bad to ensure people can still talk together in their own languages, it might also be out of scope.
Also, I know deepl might not be so better, but hearing they use google apis…just not for me, thanks.

I agree on the first part and I also fail to understand how a user unable to understand a language can become moderator for a community speaking it. It sounds so unreal, yet so real due to real life examples.

Apart from that, theorically speaking, if no restriction was put in place and it was confirmed, upon asking, that I could post in any language I want in any of the comms, then I could probably ignore an admin telling me to stop just because he can’t understand.
I know I could be a dick, but why should I stop? I might not get any reply today, but get one the next week.

…and I just realised that takes me back to the starting point.

I must admit I felt they were out of place because only a handful of people might be able to understand them without a translator.

I think it is the other way round – in using whatever language they choose, they are seeking individuals who understand said language. If no one on the platform can understand the language, it is a miss for them, not you. For some reason, and even though I don’t mean that you are doing it, this sounds like those convenience store “speak English, this is America” moments. But the discussion it elicited is really helpful in understanding language issues on platforms.

Yes, indeed.
And I knew the post would have had that kind of “karen-esque” vibe, but I really didn’t mean it. It would have been kind of awkward, as I wouldn’t gather any form of personal sense of accomplishment in promoting a language that isn’t even “mine”.

Anyway I’m happy as well it ended being a prompt for clarification instead of a shitshow.

Let’s enjoy this to its fullest, while hoping it only gets better then!

I was already unsure, thus the question, and the others came up with great reasons to not limit it, so I changed my mind.
You should be on par with the overall consensus about this matter.

I am very much against making this instance English-only, or English-default. Then we might as well stay on Reddit, cause it will result in the same America-centric userbase. Its true that different languages can be a problem if the admins/mods dont understand it, but blanket banning different languages cant be the solution.

I am planning to implement language tagging for posts/comments, which would also include an option to allow/forbid certain languages in a community. But no idea when I will get to that, as we are still very busy with federation.

Thank you so much for the filters.

Really?
I’ve been to the f-droid forum sometimes and I never saw that. I need to see that now!

It is set as a category for different langs. 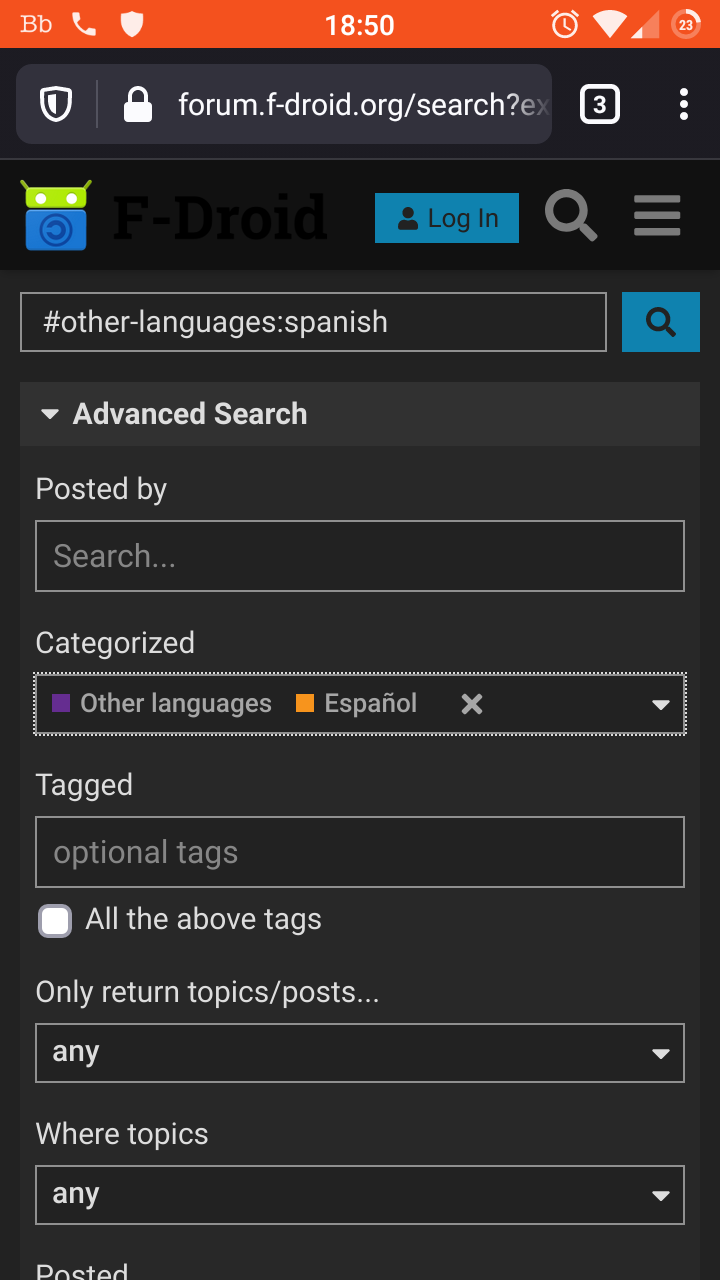 The issue with Discourse is that no more than a category per post is allowed and main ones like “Apps” or “General” are not selectable with this.

In Delta Chat forum I asked to create the same categories for each lang in each one of the sections too.

ah, you practically replied to my late reply!
That explains it then. Thanks.

Yep just been there, however I think it doesn’t completely compare to the model proposed by nutomic, as it presents the other languages in a separate category. To have a more similar match, we need to look only to the “other languages” category. Am I wrong?

Yes, you are not wrong. This is a limitation of Discourse software for choosing categories which only allow one but the purpose is likely the same.

The posts of all categories are showed together unless you filter by them.

The idea from Nutomic as you suggest is more specific.

I guess people have their motives to choose lemmy instead of reddit, not just escaping the “america-centric userbase”.

Anyway I don’t think I saw this type of organisation anywhere else (apart from peertube, as you pointed out, which unfortunately I only recently started using, sporadically to say the least), so I’m a little bit concerned it could become both problematic to manage and less easy to use. I’m not even sure I explained my concerns correctly, to be honest.
I guess time will tell here, when this functionality is finally rolled into existance…?

If I can further bother, since you proposed this model, could you answer a couple of questions?

Funnily enough, now that I think about it, the reverse could end happening here with multiple lemmy communities for each language, centered around the same topic.

Is it one of those question without a real answer?

Do you think you could implement a multi-language filter? Technicaly speaking, there should be no problem doing that with sql queries, but it also depends on the db structure (which I haven’t looked at). This way, I could show three languages at the same time.

This would definitely be required. Most people in the world speak more than one language, so it makes no sense to limit users to a single language.

Do you think this would end up as a more diverse but still united platform? I fear it could become a bubble-hell, where there are multiple “language” communities in each lemmy community, where “language groups” do not consider each other too much because of the visualisation filters in place set from each user.

This is almost impossible to answer unless we try it. But it’s pretty clear to me that Reddit’s model of “English by default” doesnt work, because the result is that everything is in English (with the exception of country or city specific communities).

Thanks for the reply.
I though that model where an instance has a main language, combined with the power of federation, was going to solve the problem, but you have a clear point, so now I’m not sure as before.

That makes some sense, but we cant prevent non-English-speakers from signing up here, so you would still see foreign language communities from other instances (which might also need moderation).

Not directly in a local community but I agree my aproach is faulty.

Hi, thanks for your reply. I’m glad that at least someone thinks the same.
I agree, being unable to understand the content makes them difficult to manage, and removing at random is unacceptable without discussion.

Anyway I’m not sure about the instance-wide thing. I mean, if it was something as a sidebar rule sure, it wouldn’t do any damage (would it?), but your wording makes it look like something else to my eyes.

p.s. About the SEO part: what is SEO-gaming? A quick search leads me to “search engine optimisation”; I don’t think it’s right, am I wrong?

Yeah, just a sidebar rule should be sufficient I think. Maybe I should have said site-wide instead of instance-wide, which is perhaps a bit technical and specific to federation.

No no, that’s fine, we’re even moving towards federation so instance-wide is best appropriated. What threw me off was this:

while other languages must be specifically allowed by each community.

Oh, that’s it then. I didn’t get you were saying “tricking the algorythm”. Sometimes I read too literally, my bad. Thanks for the explanation!