resonate.is
external-link
Resonate is a streaming music service cooperative owned by the people that use it – musicians, indie labels, fans + developers. Stream it until you own it.

I discovered Resonate today, immediately became a member and have been discovering lovely new music all evening.

I quit Spotify a few years ago when I realized that most artists get pennies while a few really big names get enormous payouts.

Seeing an artist and user owned streaming service, completely open sourced under GPL 3.0 and with a thriving community where everything is developed in the open – it really made my day.

Yes, their catalogue is still tiny compared to every other streaming service, but the music I have listened to today is of really good quality. I will still listen to and buy music from other services like Bandcamp, but I became a member of Resonate also because I really want such a service to exist and thrive!

What do you think?

It’s not open source afaik. I couldn’t find a link to a git repository on their website, had to go on twitter to find a tweet where they had a link. Apparently they open source some of their tools only. https://resonate.github.io/

PS. Just want to point out the acc joined 3h ago and this is their first post, 1h ago.

For the first few listens of a track, the price remains less than a 1 cent in total for the listener. Yet on Resonate, listening to a song only a few times multiplies the artist’s earnings by three to four times compared to the biggest corporate services.

By your sixth listen of a track, its price to play is still less than 10 cents a stream, but the artist is being paid twenty times what they’d be paid on a corporate streaming platform.

Aah there it is. Where did you find it?

click listen at the top of the page and it changes to a .coop website. I suppose the other one is like a landing page. Any way I’m happy this is for real :p

Sorry, should have mentioned that this was my first post on here. Have been lurking for a while and got so exited about Resonate that I had to sign up to post about it :)

EDIT: I should have put a link to their repo too, all their code is open source (GPL3): https://github.com/resonatecoop/stream

I know him from my home instance on the fediverse.

Thank you for recommending this! This is exactly the kind of thing I hope to find on Lemmy. I wanted to figure out how much it costs because it’s a little unclear even on the pricing page. But I see it looks like you pay as you stream up to $11.20.

I will say, I love this way of thinking about their catalog:

“I want something new every day.”

It doesn’t appear to be FOSS, but they do say under “what’s next”:

How can we support and collaborate with each other, not just between artists and listeners, but across like-minded platforms?

I was referring to the limited amount of artists, no big names as of yet – but that does not bother me. I like listening to new and lesser known artists. There is so much good music out there!

It is not a hard cap at $11.20, it is just one example of how much you would spend in a month listening to new music for 4 hours a day. Their model is based on gradually increasing the price every time you stream a song. First stream of a song costs you (less than?) 1 cent. The sixth time you listen to a song, you would have paid about 10 cents and by the ninth listen you have paid for it in full (about a dollar in total) and you will not have to pay any more to listen to it, as you now own it. 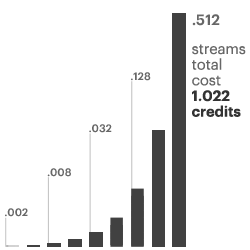 In other words; exploring new music is quite cheap, and when you find a track, artist or album that you really like, you will pay a fair price and own it after the ninth listen. And if you do not stream for a while, you’re paying nothing, as there is no monthly fee. I have to say I really like this pricing model!

It doesn’t appear to be FOSS

Yes it is, but I will add a proposal where I suggest that this is mention on their landing page, or at least have a link to the repo in the footer.

I was referring to the limited amount of artists,

Yeah, I was perfectly aware. I was talking about how they reframed it in terms of discoverability.

Thank you for the clarifications re: pricing and FOSS. So much the better!

Agree! It’s almost like a type B Corp, where employees are part owners of the company. I think it’s a good indicator of values.

All about open source! Feel free to ask questions, and share news, and interesting stuff!

Community icon from opensource.org, but we are not affiliated with them.