May the sea bless you, and may Marxism-Leninism guide you.

I should probably take a second to point out that though this article calls them “police robots”, these are and have only been used as site security. These are not equipped in any way to do police work and just serve as a mobile camera and alarm system. These also, predominately, only patrol high-income properties. In the US you’re most likely to find these in industrial parks in the Silicon Valley protecting office space of major tech firms, and in practicality are only useful for that. In every possible way, they’re less useful than employing a human security guard and the only benefits of using one of these are costs of operation (humans need minimum wage, bots don’t) and the aesthetic of having a machine constantly patrolling your site.

These have been a thing for nearly a decade, the first time I learned about them was on an article by SourceFed (rip) about one driving into a fountain in perhaps 2013 (don’t wanna look that up rn). And In that nearly a decade lifespan, they’ve changed extremely little. This is nothing more than an attempt to find the cheapest possible long time solution to paying workers wages, and as long as they work well enough on flat and smooth pavement, they’re not going to receive any real improvements. Perhaps the company that makes these, Knightscope, will come out with one that’s better at going off path, but seeing as they’ve kept the exact same design language and dimensions for all this time, i highly doubt they’d just do it.

so TTYL: These aren’t cops, they’re piss poor excuses for security guards that the company has advertised as being “police bots”.

I’m still waiting for someone to say something like “yeah, of course poverty is being alleviated, they’re killing the poor muslims! stupid communist!”

Bunkerchan is just a 4chan clone for communists. After the 8chan debacle, they had to set up their own chan to ensure they wouldn’t be shut down again. That’s been a rocky process that’s resulted in at least one crisis, but from what I hear they’re coming a long way towards stability.

To address concerns of brocialism and western leftism on /leftypol/, though yes that used to be a major issue, the people in charge of Bunkerchan are well-read Marxists and are trying to turn the community around on those things. I don’t scroll it myself, however. The information I’ve shared is entirely second hand from a close friend who’s a respected member of the community.

(also, for clarity, it might not have been specifically the 8chan shutdown that forced them to make their own chan. My memory could be wrong on that.)

HecktoDiscussion about digital privacy•Police Robots Are Not a Selfie Opportunity, They’re a Privacy Disaster Waiting to Happen - EFF2•1d

imagine one getting suck in some grass, then just fuckin’ exploding, that’d make it worth it.

HecktoDiscussion about digital privacy•Police Robots Are Not a Selfie Opportunity, They’re a Privacy Disaster Waiting to Happen - EFF3•1d

I absolutely love that these things seem to always end up committing suicide, and every instance I’m aware of one of these being used ultimately just proves that they’re frickin useless. Got water on the property? they’re taking a life-ending swim. Got grass? they gettin’ stuck. rocks? also stuck. speed bumps? fucker’s 'face’planting. And don’t get me started on people bum-rushing them, and just kicking them right over. In every way these are worse than humans, the only thing that’d make them better is if they exploded the moment something happens to them.

Here’s a secondhand account told to me firsthand by a comrade who visited Cuba, his rent-a-car broke down a few miles outside of Havana and not knowing what to do, he called for help. The police were there in minutes, didn’t keep him waiting. He didn’t speak much Spanish, so the cops tried their best to pigeon-speak with him. The cops actually put in the effort to figure out what was wrong, and once they realized what he already knew, they gave him a ride back to the city. And, most importantly, they never stopped being nice to him - an obvious foreigner in their country.

If you check the rules in this community you’ll find rule three; “No defense for the police. Yes all cops, they’re tools of the bourgeois state.” Saying anything less than “all cops” only gives asshats the leeway to say “oh, well, my cop uncle isn’t a bastard, he doesn’t agree with corporatism” or “oh, my cop uncle isn’t a bastard, he’s nice to his community”. But, pay attention to the “tools of the bourgeois state” part, because cops of proletarian states are thusly tools of the said proletarian state, and so aren’t subject to the same counter-citizenry organizational structure. That doesn’t automatically mean cops in the USSR or China aren’t bastards, but it does mean they likely weren’t.

We’ve already passed the milestone, I believe sometime in the late summer, i’d have to look that up. I’m excited for more years though, i’d be surprised if Lemmy doesn’t just keep exponentially growing. Once the existence of the site becomes common enough knowledge that ‘celeb level’ people start saying its name (even in a bad context), we’ll start to see floods of new people.

HecktoAll things China@lemmygrad.ml•Does anyone have any good resources on the history of the "China Export" logo?2•8d

perhaps answers could be found in tracking down which international body decided to start the regulation, because it could thusly be assumed that they’d have a record of the symbol and it could be assumed that either they, or a member state of the body, designed the logo.

though, I did just walk around my house and look at a lotta appliances, and most of the marks looked more like the Euro one even though the majority of the things I own are PRC exports. The Baofeng I recently got and still have the packaging of on my desk is one of those marks that looks much more like the Euro one. So I’m inclined to believe (from my non-academic and completely circumstantial analysis) that what @dengismceo@lemmy.ml said about this might be close to correct.

HecktoVuvuzela!@lemmygrad.ml•"Sound science will touch every aspect of what the Biden Administration does"10•9d

oh neat, they’re trying to package a vague form of technocracy to us. yey, liberal ‘science’ will lead us to the future! yey, we’re going to pick leaders not because people want them, but because they’re qualified in a particular field. ugh.

on that article, the only source they provided for the Uyghur tracking thingy is themself.

The Next Stage in Anti-China Propaganda: Eugenics.

The Next Stage in Anti-China Propaganda: Eugenics.

RT isn’t that bad, esp when talking about things like this. They’re deffo better than a source like dailymail or CNN, but nowhere near perfect.

they’re not true in the slightest. the so-called “camps” were legitimately just boarding schools. We’ve had posts explaining this here on lemmygrad, you might be able to find them with a search.

Hecktoasklemmy•I found a pretty serious vulnerability on lemmy, is there a bug bounty?6•11d

probably because you’re asking for money, on a site that’s not monetized and only accepts donations,

oh boy, this is some new cold war shit, just dropping “Communist Chinese Company” like that, repeatedly, to drive the point.

HecktoVuvuzela!@lemmygrad.ml•AOC calls republicans "cowards" for not supporting law and order.6•11d

I find it too funny that Socdem in the US practically slurped on Guaido’s boots, and he doesn’t know who any of em are.

People who’ve been asked their political alignments after immigrating out of an AES state: predominately lean towards the right, often inspired by anti-communism, tend to join or start anti-communist movements or parties exterior to their native country

Liberals who’re either too dumb or too blind to realize this: “but… I thought you were just smarter than the people in your home country?”

It’s really no surprise that people who fled from ‘communism’ would create a culture that leads fellow communism-fleers to join into groups like QAnon and Trump’s memberbase. 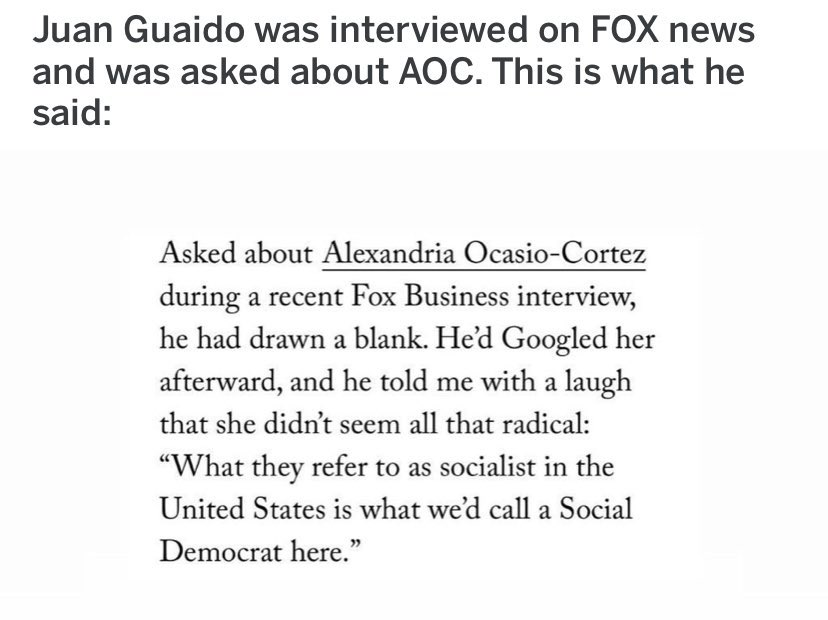 Craigslist is dying in some places, with people using facebook’s marketplace instead. Also, I’m not saying eBay is an ethical company, but they are an alternative to Amazon.

Collusion between Taiwan and U.S. will face resolute countermeasures: spokesperson

Collusion between Taiwan and U.S. will face resolute countermeasures: spokesperson

'No one is above the law': HK refutes the West's criticism on recent arrests

'No one is above the law': HK refutes the West's criticism on recent arrests

We Stand For The Red White & Blue In This Household

We Stand For The Red White & Blue In This Household

Just another development in the New Cold War (NCW), the Trump administration is rallying their supporters for a protracted people’s fascist’s war using conspiracy theories about the CCP infiltrating the DNC and all Left-Liberal media (both in the sense of news, and in the sense of entertainment)…