A new report alleging the US was spying on European leaders through Danish intelligence services is not the first of this kind. Washington has been caught before, but there’s no will in the EU to assert its independence.

Whilst the European Union talks of matters such as “strategic autonomy” and idealizes itself as a unified, independent force for good in the world, the reality could not be further from the truth. Espionage revelations are just the tip of the iceberg of a variety of ways in which the United States has, through its integration with Europe’s military and security dynamic, utilized a myriad of political tactics to strongarm the bloc into following its political will and agenda, even when it is apathetic or openly objects to it.

But sure, ban Huawei because the US of all countries are saying that they think their telecom infrastructure tech is spying on users.

Y’all just know that the US is singling out Huawei because their telecom hardware is one of the few that the US can’t backdoor into.

I have been following very deeply the Huawei controversy, and the initial rumours were indeed that Huawei was banned because they refused NSA from letting them put their backdoors in Kirin SoCs. ZTE was only allowed again because their telecommunications hardware was not much of a threat, and their phones had backdoored Qualcomm SoCs.

Wouldn’t surprise me honestly. Anyone who actually thinks the US is doing this for the good of the people is either too young to understand what politics are, or is flat out brainwashed.

The issue is that our perceptions, even yours as example, is shaped by the fact that the vocal people on the internet that praise American technology are usually Americans who are brainwashed since childhood, via Hollywood, Disney cartoons, sitcoms, the hegemonic city environment around them to worship and protect the American Dream and the hegemony for their own survival. This kind of nationalism also exists in France, and other countries.

They are shown Intel, AMD, Nvidia, Cisco, Belkin, Apple and so on as the only viable options of technology in life, reinforced by the so called open internet culture, most of which does not have non US or non West EU voices. People are flocking to my r/privatelife for this reason, as I am giving voice to the concerns of the non hegemonic, oppressed and small countries who suffer from disinformation and propaganda from CIA, USAGM, NED Murdoch, Bilderberg news media and so on.

It will not just take time, but folks that create spaces that empower these very voices of the world, that give them an opportunity to explain themselves on equal footing. This is the only way people can become revolutionary and bring a collective change to against the individualism and pseduo intellectualist bias that has infected society.

usa spy, china spy. its not like one party are good guys and the other is evil.

The US has been doing that for years and so far they still just “think” they’re spying.

so you believe that chinese or russian inteligence agencies are any better?

Does this count as inter imperialist conflict? Because I don’t understand why the US would think it needs to do this. Also why the Danish intelligence helped them with it.

The EU and NATO basically exist as tools that help the US to exercise control over Europe. This spying is just a normal part of that control. And I dont think it can be considered as inter-imperialist conflict, because Europe is not independent from the US (just look how many military bases they have here).

Its a good question, because occasionally the US does clamp down on its vassal states ( this numeves video on How the US dominates tech shows a few cases of the US doing this against France and Japan with certain industries ) . You could call it conflict, but considering they aren’t anywhere close to peer competitors ( especially militarily ), and since the capitalists of these countries mostly have the same goals of imperialist wealth extraction from low wage global south workers, its not much of a conflict. Maybe like the head of a crime family keeping an eye on what all the little bosses are doing.

Now imagine what is kept secret

Wild that this was only revealed last year:

And the supposed “terrorism” still happens not blinded

I don’t get people’s reliance on these media fact-checking tools. They don’t exist in a vacuum, free from bias themselves. From what I’ve seen they just report the maistream consensus about different networks, which is the liberal consensus and not necessarily correct. 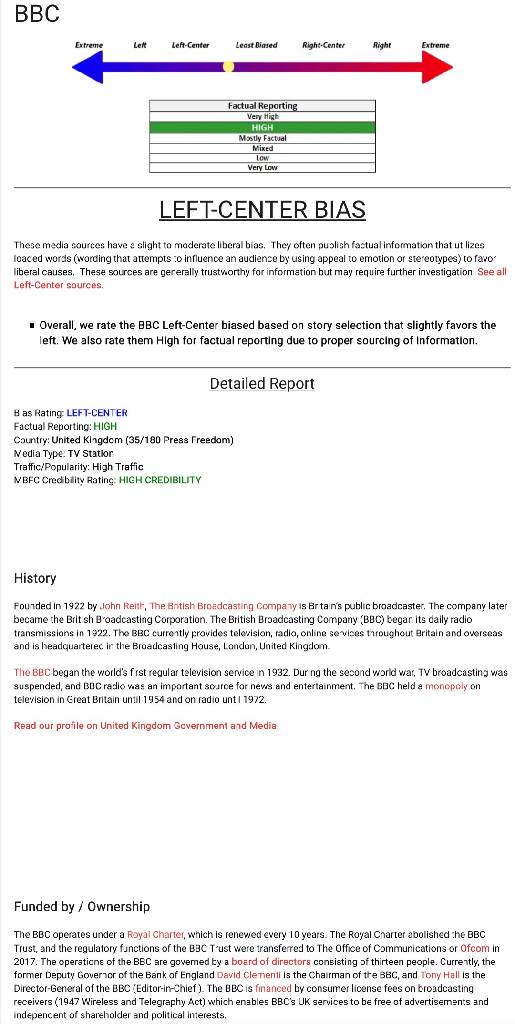 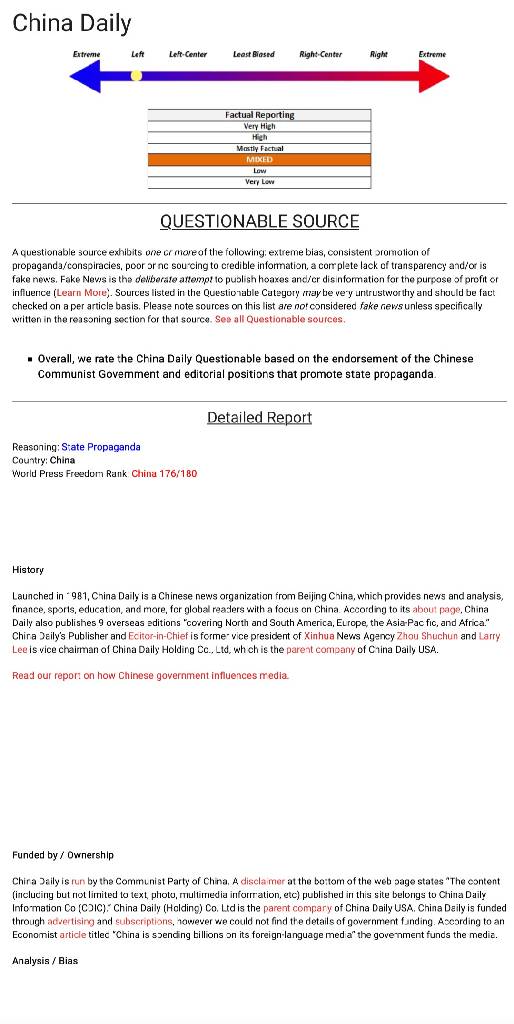 From what I can tell, the only thing bringing down China Daily’s is the fact that it’s run and funded by the CPC, although the site is unaware how much funding it receives. Because of this, it’s been labelled state propaganda.

But the BBC is also funded by its government, the UK, and has admitted that the funding will be used to spread BBC’s reach over the world, especially in countries where there is a “democractic-deficit.”. The government document cited in that page is pretty explicit about this being a soft power move…it’s literally in the title of the section where they announce the new investment.

So then why hasn’t the BBC been labelled as spreading state propaganda and had its score on this media bias site docked?

Then there’s this entry for TeleSur, also a “mixed bag in factual reporting”: 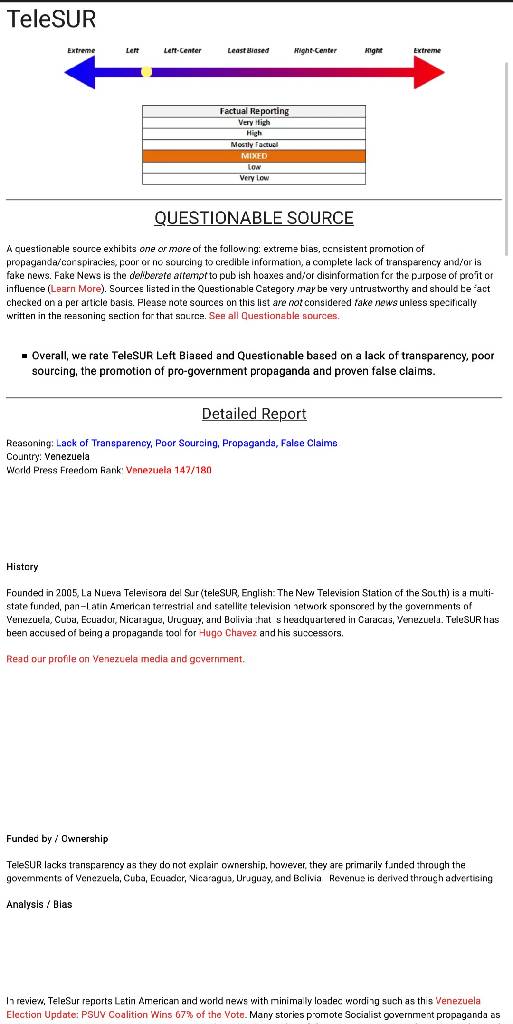 It’s funded by various Latin American governments, although the media bias site doesn’t know how much, and has also been docked for being “propaganda.” Also, it seems like it’s been docked for some false reporting, of which a couple are listed at the bottom.

One of these is a tweet wrongly reporting an image as a popular mobilization in Chile.

Another is wrongly reporting that El Chapo set a bounty on Trump.

Another is falsely reporting that Christian Ronaldo donated $1.5 million to Palestinians in Gaza.

While these should not be excused, it also shouldn’t be used to generalize entire news networks as unreliable when many news networks wrongly report things at times. That’s why it’s good to judge things on a case-by-case basis like @nutomic@lemmy.ml did in this case. 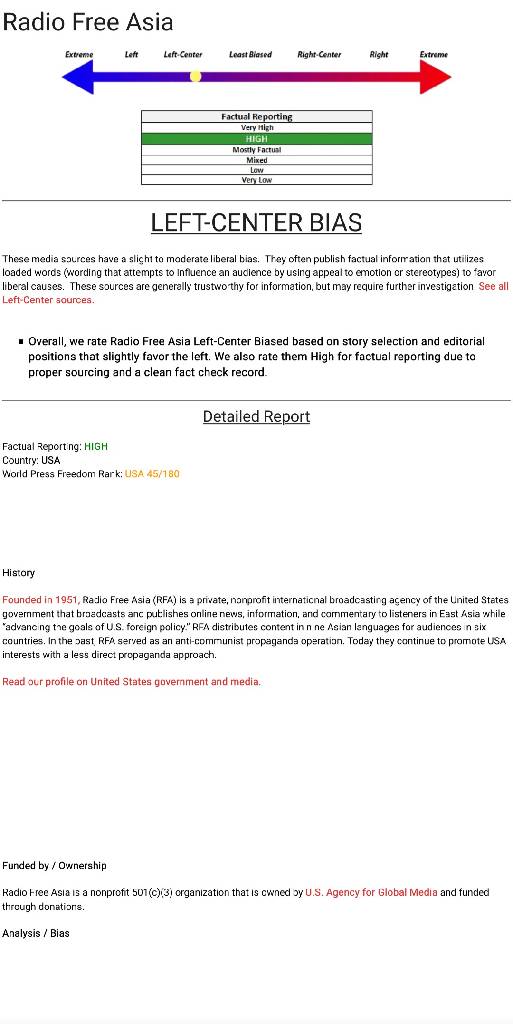 The RFA has ties to the CIA, has a history of citing Falun Gong members, of citing unnamed sources, and yet it’s been given a good rating by this site.

Again, this site just seems to have a liberal bias in its reporting.

Good job. Sifting through might have taken like 20 minutes, and look how awesome your comment is to teach about the nonsense fact checkers, made with only one intention, to amplify the pseudo intellectual voices that refuse to do their own research.

I think some people like these “fact checkers” because they provide an easy way to discard different opinions. Basically the allow to simply shout “fake news”, without having to do any critical thinking, or coming up with actual arguments.

I mean … can you really blame them? clinging to something to believe that you’re right feels really good, like really. and honestly at this point I don’t think the average person has any chance of actually knowing who’s right and who’s wrong.

I myself am going through some sort of cognitive dissonance since I joined Lemmy because of how different opinions are from other places I’ve been.

RT is far from perfect, and there is a lot of trash on their front page. But at times they also publish articles from excellent analysts, like this one by Tom Fowdy. I certainly didnt notice any pro-Russian bias in the article.

This thread is about the specific article linked, not about RT in general. If you want to criticise RT, please do that in another thread.