does anyone have the meme based on an early 20th century political cartoon that includes people freaking out about electrical lines causing death and distraction with a Meme caption showing THIS IS WHAT SOME OF YOU LOOK LIKE WHEN TALKING ABOUT 5G. An internet search isn’t helping me find it. 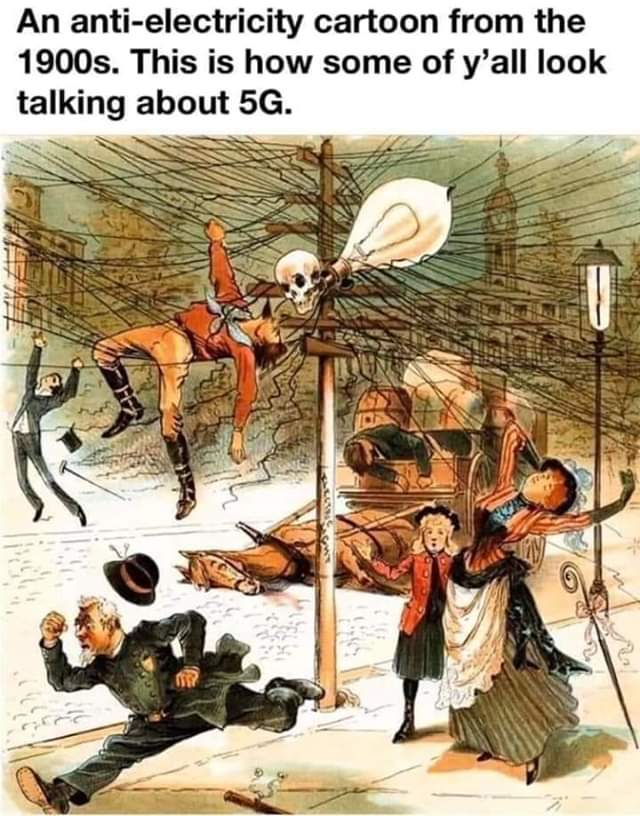 This isn’t really the place to have a discussion about this meme, but imma start one anyways. 🙃

I always find it bad that there’s pretty much only the two camps of conspiracy fetishists and those who just assume it’s going to be fine.

Like, there’s a legitimate logical reason why 5G is quite likely fine. Because from our observations so far, dangerous electromagnetic waves start beyond visible light (starting with ultraviolet light, so-called “ionizing” radiation), whereas 5G, much like its predecessors, is far away from visible light.
Additionally, the sun is blasting us with visible light at an intensity we couldn’t reproduce, if we wanted to, so it’s not either like the increased intensity is logical to cause problems.
But most people who accept it to probably be fine, have likely not thought this through nor asked someone about it. And you can’t really just ask about it without possibly being thought of as believing in a conspiracy.

At the same time, there is legitimate reasons to be concerned. We haven’t done long-term studies to see if e.g. 5G waves make your arm fall off after 20 years of exposure.
There’s no logical reason for it to do that, but exposing billions of people 24/7 before being absolutely sure, that’s a decision which can legitimately be challenged. And we have done some stupid shit in the past, like X-raying people to see whether their shoe fits them. So, you don’t even need there to be a conspiracy for a certain skepticism to be in order.

There’s also “acceptable” loss. Electrocution is the sixth leading cause of death in the US workforce, and that’s clearly acceptable for society due to the benefits of electricity. shrug

Yeah, ethics are sometimes quite weird. In some scenarios we’ll call any life lost a tragedy, in others we’ll accept a lot of deaths in the name of progress.

I also recently thought this with bikes and cars. You pretty much only need a bike helmet, because cars exist. We could’ve declared cars dangerous and prohibited them. Instead, we told those old-timers still using a bike to pad out their brains and simply hope for the best when they do suddenly encounter a car.

What would you like to see? A quick search on pubmed shows 3,615 articles with the search prompt of ‘ghz radiation’, with some pretty comprehensive review articles existing before the roll-out of 5G. This is not something that’s missed by science, but I agree that corporations probably don’t have our best of interests at mind when they lobby the government to expand wavelengths which they can operate on and if you’re getting at being upset with the lack of scientific oversight or no good venues to publicly discuss the public health implications, then I’m definitely on board with you.

I would have liked to see more of an open, public discussion.

As someone else responded, sometimes it is acceptable for us as a society to take certain risks to not hold up progress. I can get on board with that here.

Like, the costs and the necessary delay of a long-term study would have probably been prohibitively high. We probably wouldn’t have any form of wireless connectivity now, if that was a strict requirement.

But basically resolving what you described in your last sentence, that wouldn’t have hurt. At least acknowledging that it’s not entirely risk-free, would have probably made conspiracy nuts disappear in an instant:
Yes, we’re risking the health and safety of all of you, but this was actually decided to be worth risking by your democratically elected leaders. We didn’t need some evil council. If this harms you, that was incompetence, not malice.

This drawing is super sick though, like, a fucking skull-headed lightbulb spider with a web of power lines??? Metal as hell

@cypherpunks thank you very much